THE AGONY AND ECSTACY

You're likely aware that gas costs more here than in the U.S., but the first time you top your tank, you really FEEL the difference.  I still had a quarter of a tank left in the little Peugeot I’ve been driving, and it cost me 70 euro—that’s $90 U.S—to fill up.  Yikes!  That means a full tank would be about $120!  Make sure you consider that if you plan a driving trip around Europe.

For the last two days, I couldn’t connect to the Internet.  I haven’t been able to listen to NPR or stream a movie through Youtube or check out apartments in Thailand.  I can access my email through my Smartphone, but since my Smartphone only writes in Italian, I can’t answer emails to U.S. friends and family.

I didn’t know whether the connectivity problem was with my computer or with my mobile internet device.  So I went back to the café I had found in Linguaglossa to see if I could get the Internet through their Wifi.  Then I at least would know which one needed fixing--maybe.   I wanted to call my computer genius consultant, Ethan, because he can fix anything, but I didn’t think he would be able to  remotely access of my computer from Washington, D.C.

There was a slew of traffic going into Linguaglossa, and I wondered why.  On the edge of town, there is a flower shop, and business was booming there.  I got lucky and found a parking place near the café, and over a cup of wonderful cappuccino, I learned that the problem was with the mobile internet device, not my computer.  I was happy about that.  I saw an electric shop that had the name of my internet/phone carrier on its sign, so I headed there to see if anyone could troubleshoot my device.  The store owner spoke no English, but I used my two forms of Italian—elementary speech and gestures—and we were able to communicate.  He couldn’t help me, but directed me to a store where he thought I might get assistance.  That store was closed.  As I was standing there looking for a sign with the store hours on it, an elderly (older than me) man came up to me and started talking to me in Italian.  Again, basic communication occurred.  He wanted to tell me that the shop was closed because it was a holiday—All Saints Day.  I couldn’t get beyond that with him to find out the significance of the day.  But I did understand that the shop wouldn’t open that day.  Domani.

So I headed back to my car, which was parked across the street from the electric shop.  The owner of the shop was standing outside on the sidewalk with another man, who started yelling “hello” at me, in English, and gesturing for me to come across the street.  I didn’t know who this man was and never really found out.  He spoke  English quite well and told me that the store owner told him that I was having computer problems, and he wondered if he could help me.  He wasn’t able to, but what a Good Samaritan.  There are angels everywhere.  I was able to learn from him that All Saints Day is a day for honoring the dead—that’s why people were buying all those flowers—to put them on graves in the cemetery.

I left town and headed for Piedimonte Etneo to pick up a few groceries before everything closed down for the day.  I have been going to this particular fruit and vegetable vendor since I’ve been here.  He is such a sweet guy.  When I start to check out anything in particular, he comes over and picks out the best of the lot for me.  I saw some really good looking strawberries, so I picked up a box.  He put the one I picked out back, then went over to check all the boxes and brought another one back that he had heaped up with extra strawberries.  He always throws something extra in my bag—usually apples—each time I go there.  The first time I stopped there, the day I arrived—I asked his wife where I could find a grocery store.  She was trying to give me directions, but I couldn’t understand.  So she got in the car with me and showed me where it was, a few blocks away, and then walked back to their shop.  What a nice couple.   I told her husband I was leaving in a couple of days, and he gave me a big hug, kissed both my cheeks, European style, and told me he hoped I would return.

When I got back to my apartment, I called my internet carrier to see if they could tell me where I could go to get some help with my mobile device.  I learned that the problem was that I didn’t have enough money in my account to cover the next month.  So I went back into town to the Tabacci (that store where you buy bus and train tickets, add money to your phone or internet accounts, buy cigarettes, etc.) and added money to my account.  I had done this with my phone a couple of weeks ago, and I received a message shortly afterward on my phone and it was reactivated quickly.  That didn’t happen with my internet service.  So I called again.  This is a painful process, because I hate phone menus anyway, but when they’re in Italian, it’s just a roll of the dice whether I get to the right department, and sometimes you get someone who can speak English and sometimes you don’t.  And this time I got someone who said she could speak English, but she didn’t understand it very well.  After a very frustrating 15 minutes, I understood that I wasn’t going to get internet service until November 6.  It has something to do with the promotion I apparently signed up for (without being told I was), and even if I was willing to pay some extra euro, I can’t get service.  At least, that’s what I think the woman said.  I’m not sure she understood anything I said.

Fortunately, I moved to Noto today, where I’m staying in a small hotel across from the beach, and they have free Wifi.  So I’m okay until next Tuesday, when I’ll be able to use my mobile device again.  For the first time since I’ve been here, I got on the autostrade and didn’t lose it.  It brought me almost all the way to my hotel.  I discovered that my very Smart Phone has a talking navigator.  While this phone can’t write in English, it can speak in English.  Sometimes things work out better than you expect!  It’s a good thing I made that discovery today, because once I got off the autostrade, I’m very sure I couldn’t have found this hotel on my own.

After I got here, I had lunch at a restaurant right in front of my hotel.  I had the most deliciously simple salad with shrimp, arugula, artichokes and shavings of parmesan cheese.  I didn’t even mind paying the extra 4 euro for water and my table service!

I thought I was going to have a view of the sea here, but instead this is what I see out my window…. 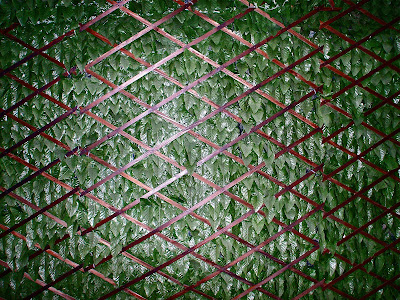 Sometimes things don’t work out the way you expect them to.

But, when I walk across the street, here’s what I see…. 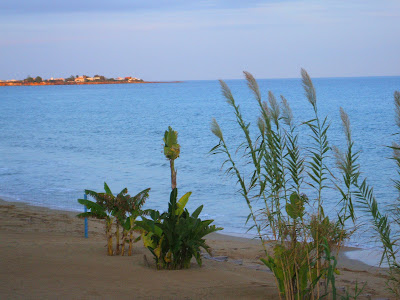 , but the gentleman who was showing me the menu got on the phone, and next thing I know he's ordering sardines so that they can make this dish for me.  I'm telling you, these Sicilians are angels.  They extend themselves so generously to help you or to make your stay here more enjoyable.  Even if I don't love the sardine dish, I'll love it.