Noto is one of the most beautiful Italian cities I’ve seen so far.  It’s not very big—the population is only around 25,000.  Noto was totally destroyed by an earthquake in 1693 and rebuilt on a different site about 10 kilometers away.  The architects who planned the new city want to create a linear, perfectly proportioned urban center with parallel lines.  The city was divided into three parts by three roads, running east to west, ensuring the constant attention of the sun.  The nobility lived at the top (of course), the clergy in the middle, and the commoners at the bottom.  It is listed as a UNESCO World Heritage Site.  As you’ll see, Noto is big on baroque, the architectural style popular at the time of its rebuilding. 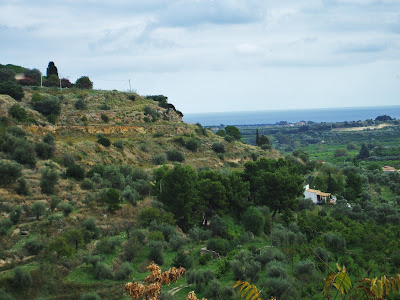 Noto is close to the sea.  Here’s a shot I took from the end of town where you park and leave your car.  My hotel, which is by the sea, is about 8 kilometers from the city of Noto. 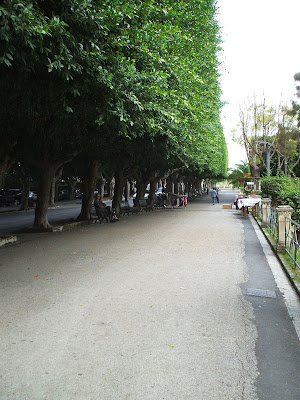 The three main roads that run through Noto are for foot traffic only.  When you enter from the east, you first walk through a park under the umbrella of these dozens of trees that shade the park benches. 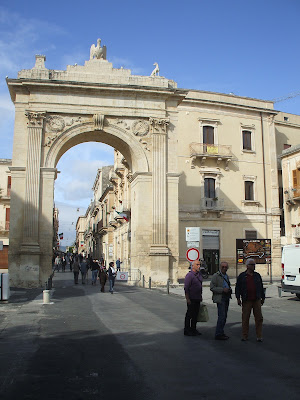 Then you go through this arch into the town. 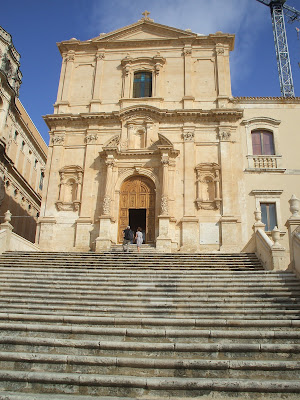 There must be more churches per capita in Noto than anywhere I’ve been so far.  This is the first one I encountered. 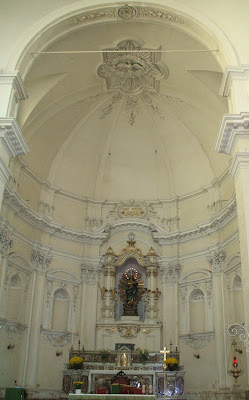 Even though it was Sunday morning, there was no service in this church, so I went in and was allowed to take pictures.  Here''s the beautiful altar. 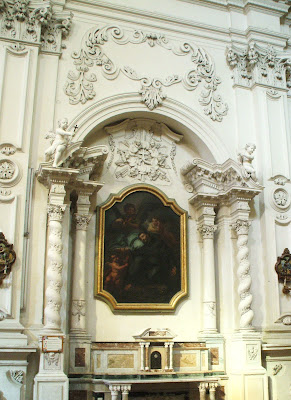 And one of the side altars.

Several of the buildings on this primary road through Noto had long flights of steps leading up to them.  It gives the city a very regal air.

Across the street from the church was Palazzo Ducezio, which housed a small theater that was quite lovely. 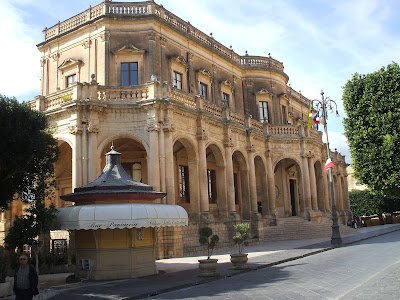 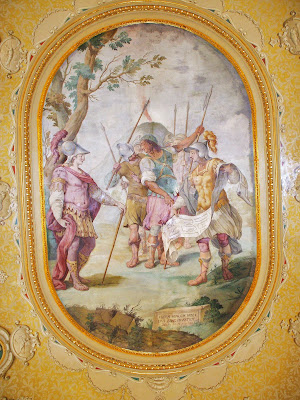 The ceiling frescos were beautiful. 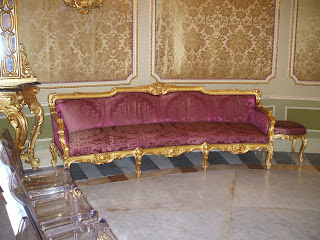 And I wouldn't mind sitting on that red velvet divan listening to one of the piano concerts which often take place in this elegant setting.

I passed several more churches on my walk down the primary road of Noto, but this cathedral was the most majestic.  There was a service taking place, so I wasn't able to take any pictures inside. 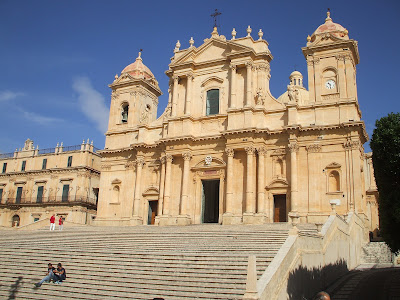 went up a side street to the Palazzo Nicolacio and took the 4 euro tour.  This palace was built by a Sicilian family that pretty much bought its royal title with lire made from tuna fishing.   My favorite room was the ballroom, where there were some beautiful frescoes. 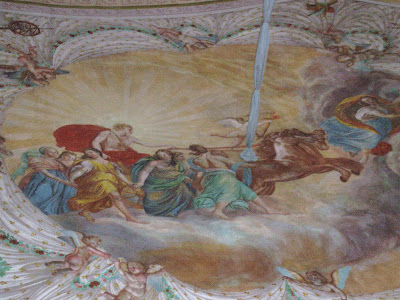 This one was on the ceiling in the center of the room. 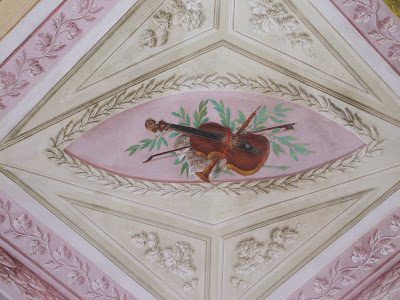 And I especially liked this violin. 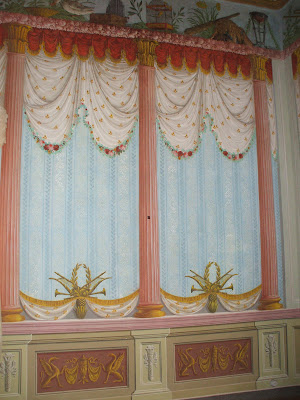 he wall panels all around the room looked like this.  It was a very colorful room.

And here's a sampling of the creatures that decorate the bottoms of the balconies of the palace. 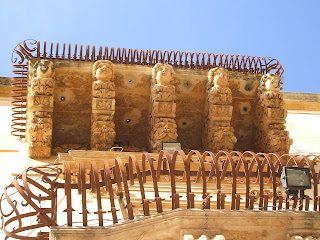 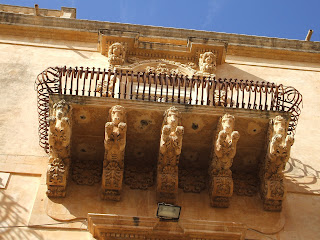 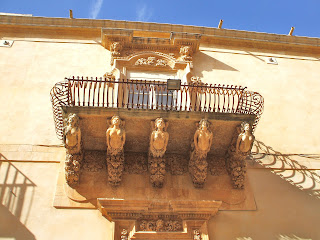 After knocking around town for a couple of hours, I decided to stop at a popular café known for its granita and gelato.  I hadn’t seen granita anywhere else, so decided to try it.  If you’ve never had it, it’s basically flavored ice, shaved very fine.  I ordered lemon, and the waiter asked if I would like it with or without brioche.  What an odd pairing—granita and brioche.  I said yes, of course....delicioso! 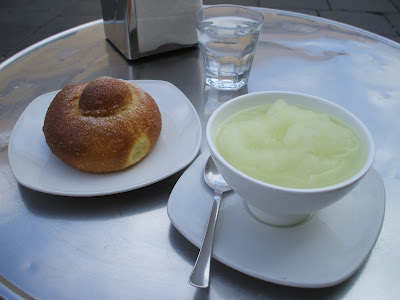 On the way back to my car, I passed some street entertainers. 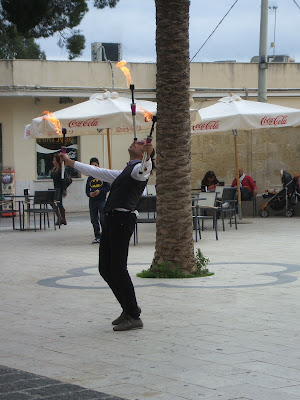 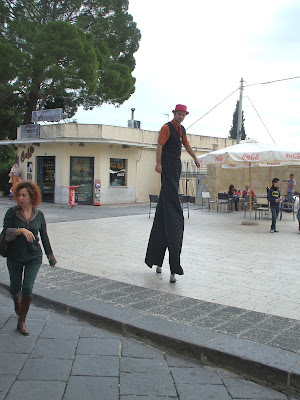 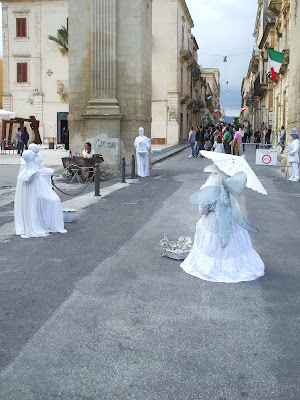 And women in white.  I've seen this often in Italy....people who dress in costume and sit or stand like statues.  It's usually a one-person act.  This is the first time I've seen a group doing this.  Of course, they accept donations.

There are apparently seven other Baroque towns in this area...all rebuilt after that big quake, but Noto is the best known.  And it's very photogenic.  I took 75 shots today.

One thing I found very strange.....today it's 75 degrees, but everyone was dressed like we do during fall in Michigan.  Blacks, browns, dark blues...sweaters, jackets, boots.  I felt very out of place wearing capri pants and a blouse.  But I wasn't cold at all.  It gets as hot as 120 degrees here in August, so maybe 75 feels like winter to these Sicilians.

Tomorrow, I might go in search of the ruins of the original Noto, or maybe back to Siracusa to see more of what's there.
Posted by Unknown at 9:30 AM