Yesterday I took a whirlwind tour of northern Thailand, which consisted of about 8 hours of bouncing around in the rear seat of a van that was in serious need of a new suspension system—struts or shock absorbers or something—and about 4 hours of being whisked around the several sites we visited.  I won’t do this again.  Today, my back is an aching reminder.  Time for a Thai massage!
Anyway, the highlight of the tour was The White Temple.  Yes, sorry, one more temple, but this one was very atypical of what I’ve seen so far.  It’s a very comtemporary temple, the construction of which began in 1996 and is ongoing.

The temple is the project of this visual artist, Chalermchai Kositpipat, and this visual image of him greets you at the entrance.

The temple grounds are chock full of sculpture and visual imagery depicting Buddhist teachings about the need to let go of human passions and desires in order to reach nirvana. 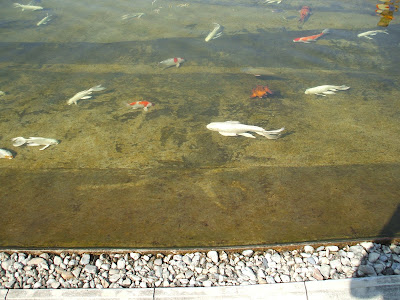 The pools in front of the temple are full of these colorful fish. 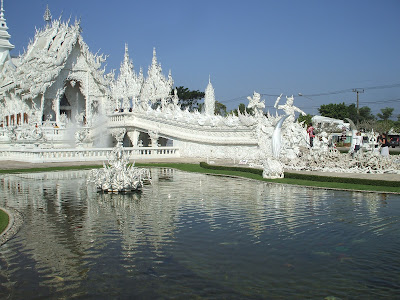 The temple itself and the surrounding grounds are beautiful. 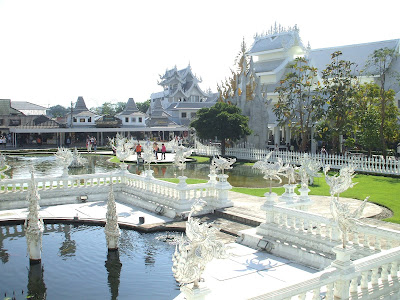 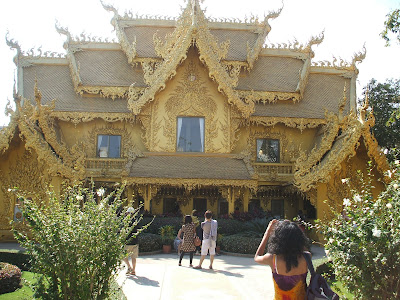 This is the most glamorous outhouse I’ve ever seen. 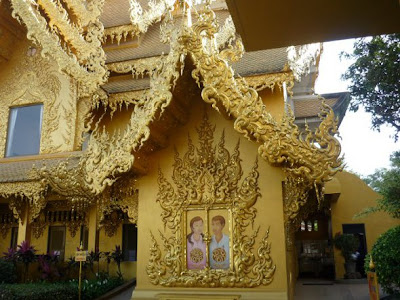 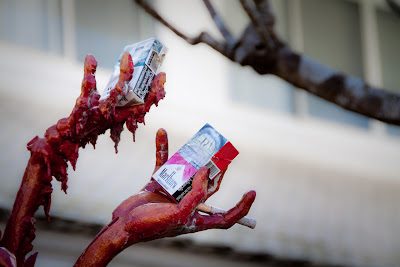 A warning message about one of the evils in the world than needs to be resisted. 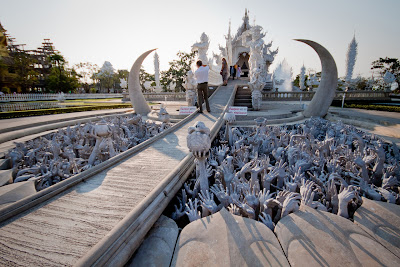 There are lots of images of demons and skeletons everywhere, and this ocean of hands reaching up from hell is eerie.

We weren’t allowed to take photos inside, so I borrowed a few photos to show you some of what I saw.  The murals inside were a unique blending of classic Buddhist and contemporary images. 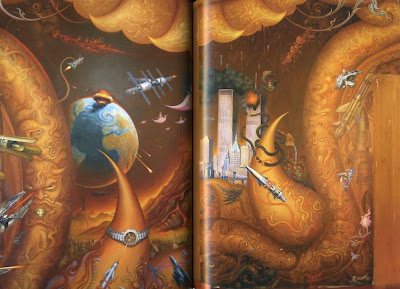 You wouldn’t expect to see images the collapse of the Twin Towers, Michael Jackson, rocket ships or cartoon characters like Spiderman and Superman in a Buddhist temple. 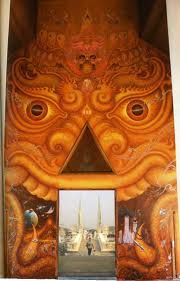 In one eye of the demon face on this wall is an image of Osama BinLaden and in the other eye an image of George Bush. 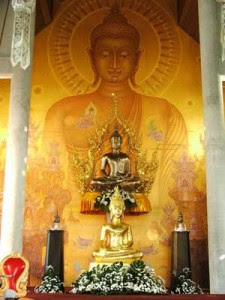 In the “altar area” of the temple was the classic giant Buddha.  There was also a very realistic figure of a monk sitting in the lotus position in front of the Buddha facing the door.  It was so realistic that it took me a few moments to realize it wasn’t a real person.

This mixture of classic and contemporary imagery is very controversial in Thailand.  But the artist is very committed to completing his project and has made provisions for the work to continue after his death.  There’s an art museum on site, filled with his work.
I was disappointed with how little time we were allowed to explore this very unusual temple.  I had to borrow a number of photos to capture the highlights of the story of this temple, and I had to almost run through the museum to catch a glimpse of the artist’s paintings.
Our next stop was the Golden Triangle—the point where the Ruak River flows into the MeKong, forming a natural boundary between three countries—Thailand, Myanmar (Burma), and Laos. 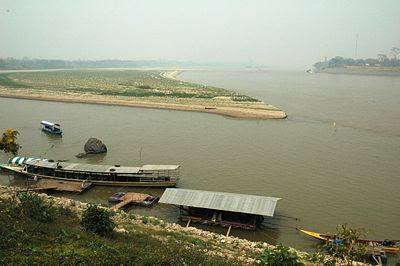 Thailand is in the foreground, the triangle of land is Myanmar, and across the river is Laos.

This, as many of you probably know, is where a great deal of drug trafficking occurred, as well as trading in other black market commodities, like precious gems and gold.  There is still drug activity here, evidenced by the number of police checkpoints we passed as we traveled into and out of this area of northern Thailand. 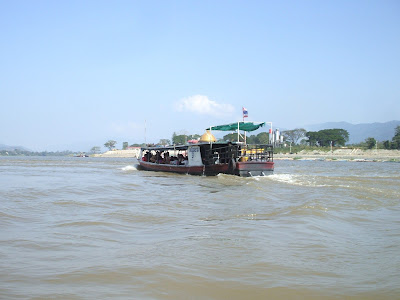 Here we took a ride up and down the Mekong River on a boat like this one. 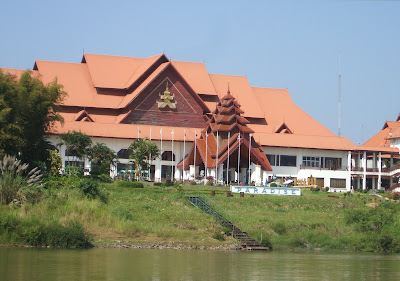 This is a casino on the Laos side of the river, aptly named, for those of you who love gambling (and you know who you are), Paradise. 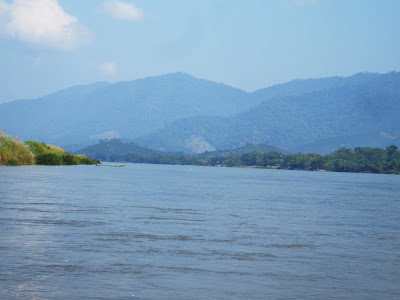 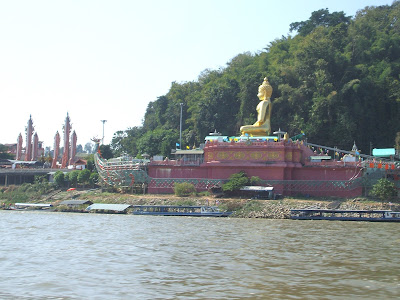 And we have Buddha on a boat.

We crossed the river and debarked in Laos to roam around a market there. 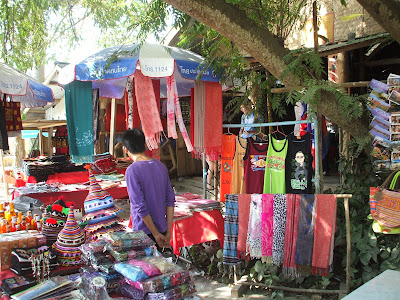 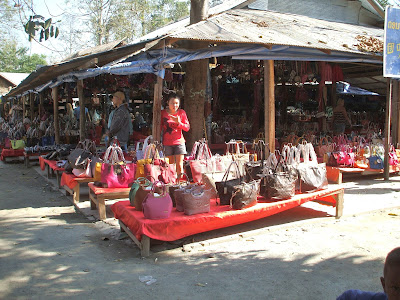 And I never saw so many purses in one place.  There were probably 20 or so vendors with this many purses on display.

Most unusual were the bottles of whiskey.  Laotians put all kinds of reptiles in whiskey, believing that it gives them benefits like long life, virility, power, etc., depending on the reptile. 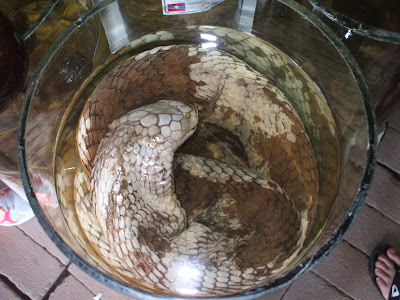 This whiskey shared its glass tank with a giant cobra. 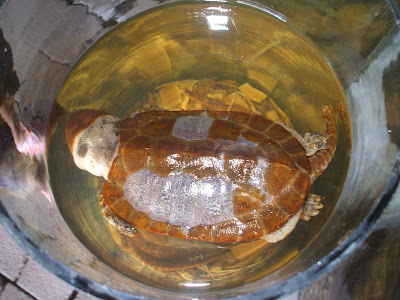 A turtle in this one….other tanks had a gecko, an armadillo, and one had the penis of a tiger (guess we know what the imbiber of that one was after).  Beats a worm in a bottle of tequila, I'd say. 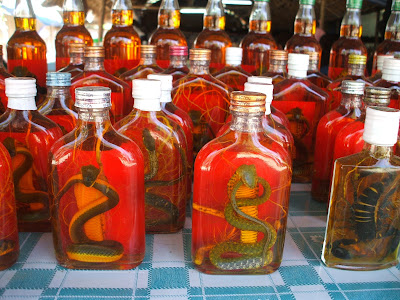 There were bottles of it for sale at several vendor sites.  The choices here were various types of snakes.

On we go (I warned you that this was a LONG day).  The next stop was for lunch—very average, but a chance to taste food representative of the Golden Triangle countries.  Then we went on to Mae Sai, which is the northernmost point in Thailand. 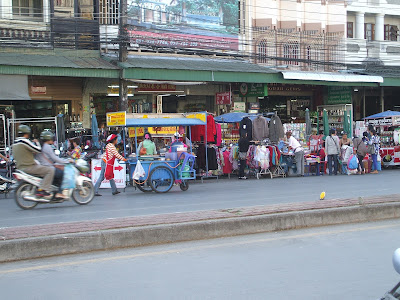 It was another shopping stop, and I ordinarily don’t like these, but I actually bought something here. 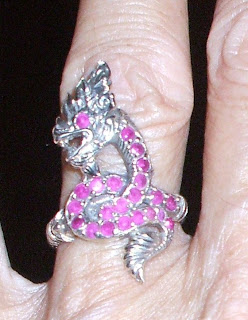 My closest friends know I’m a sucker for rings.  Here’s my latest addition.  It's a dragon, which is a symbol for good luck here in Thailand.  I was told these are rubies, but for $25, I kinda doubt it.

Our last stop was the village of the Ahka hill tribe, the most downtrodden and impoverished of the hill tribes of northern Thailand.  This tribe came to Thailand from Burma in the early 20th century to escape persecution. 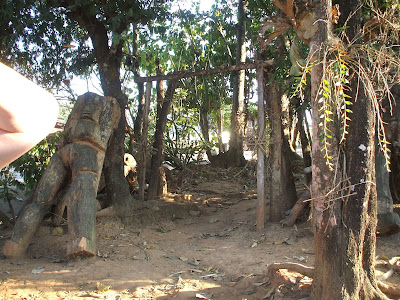 The entrance to their village is marked by this wood portal with the wooden statue of a woman on one side... 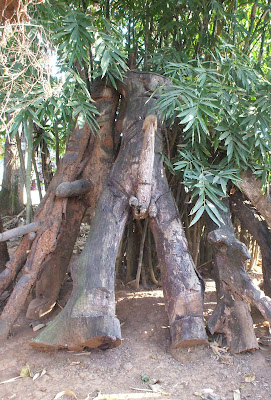 And a man on the other side…their nakedness is somehow symbolic of fertility. 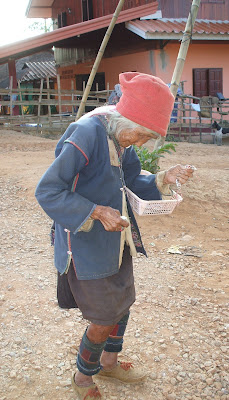 This village elder greeted us and wanted to sell us bracelets. 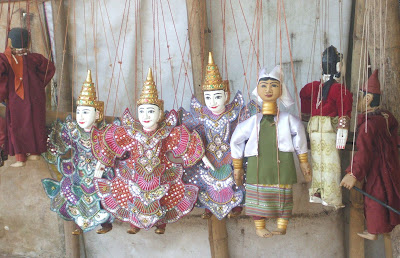 Another woman was selling these very colorful puppets.

And this elderly man was dressed in traditional costume, offering his photo for money.

One of the other highlights of the day was meeting an Italian in Thailand! 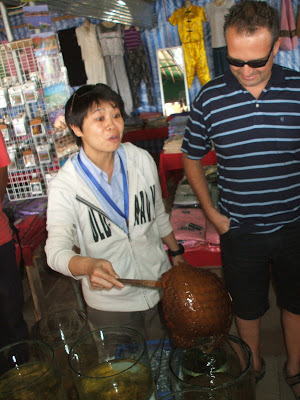 This is Fabio next to our tour guide May when she was explaining the reptiles in the whiskey (that's the armadillo).  Fabio is from Verona and works in Human Resources for the Barilla Company (the pasta people), so we had a lot to talk about.  He has been dating a Thai woman who lives in Bangkok for almost three years and travels here three times a year to spend time with her.  He’s trying to get her a visa for Italy, and I can appreciate his frustration with how difficult it is to accomplish that!  (I suggested marriage, but I guess he’s not ready for that.)  I got a lot of good information about his area of northern Italy, as well as his business card and an invitation to call on him when I’m in his neighborhood.  Meeting him almost makes up for my sore back!