Since my last post, I’ve been half lounge lizard and half nomad wandering around ChiangMai and, of course, I have more pictures of temples.  Here are my favorite shots…. 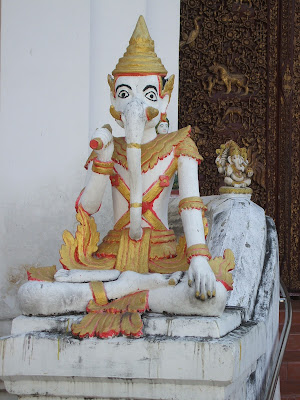 I haven't seen this guy with the elephant nose before, and I don't know who he is.  I think he must be Indian. 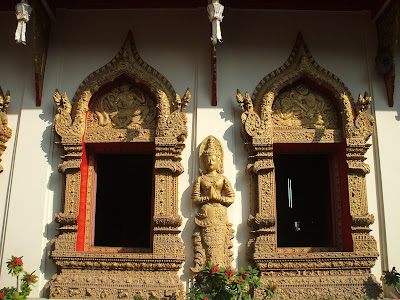 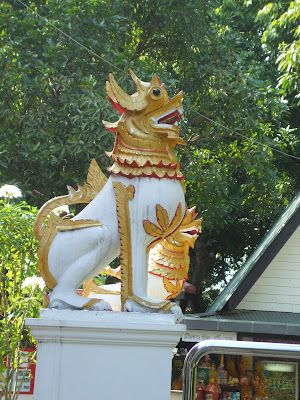 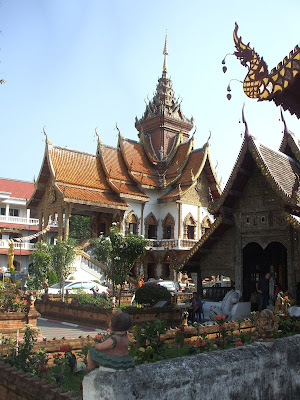 I liked this setting and the relative modesty of this temple compared to others. 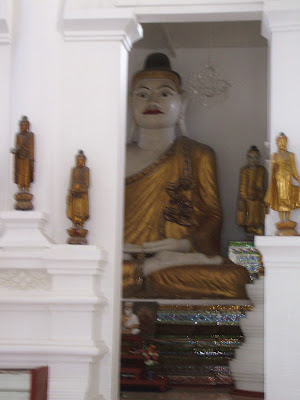 I thought I was going into a guest house when I opened the door to this. 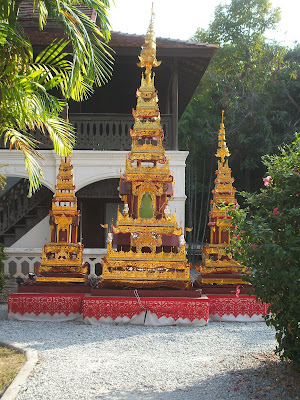 This was outside an architectural school.

I’ll probably bother you with a few more photos of temples because I’m visiting a famous one on a tour I’m taking, and I wouldn’t want to withhold.

I went to another cooking school this week.  The instruction was different from the one last week.  They demonstrated the prep and cooking for all the dishes that were selected by the class before we cooked them .  So we got to taste a lot of dishes.  They also did some of the prep for us—at the other school, we did all our own prep.  The recipes were different, too.  These had fewer ingredients, so there wasn’t as much flavor layering.  I liked the ones from last week better.   Here are the dishes I made this week… 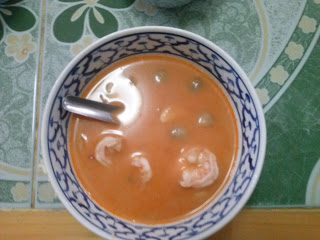 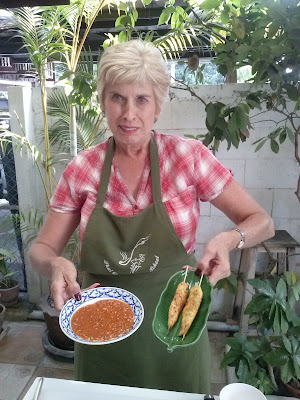 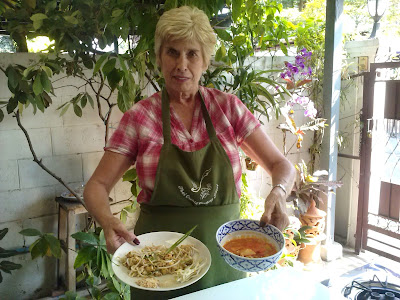 A yellow curry with chicken on the right….I asked for additional ingredients on this one to duplicate one of my favorite curries---gang garee, which has chicken, potato, carrot, and onion in a yellow curry sauce.

And pad thai on the left, which I’ve always wanted to make at home….they gave us tofu, but no chicken or shrimp, but it was still pretty good.

I also made a delicious banana pancake for dessert, but forgot to take a picture—you make pancake batter with coconut cream and put sliced bananas and shredded coconut on top before you flip it, then garnish with a drizzle of honey or evaporated milk.  I was wishing for some warm maple syrup, which would have been perfect.

I had lunch yesterday at a restaurant called Butter is Better.  A couple I met at last week’s cooking school recommended it to me, and I was attracted to the name.  I heartily agree with the statement (although a good Italian olive oil is also equally supported).  I’ve been really hungry for some good Western food, and the key word here is good.  You can get Western food, but so far, I haven’t found any that tastes the same.  I had a pastrami Rueben sandwich, and it tasted funny.  I guess I’ll have to keep looking.   There were three American men around my age sitting at the next table, and I couldn’t help but hear their conversation because the tables were very close together.  They were talking about their young Thai girlfriends, and I thought it was pretty funny that this was the topic that dominated their entire conversation....not sports or business or politics.

I didn’t see any restaurants in the area where the market was, so I went in search of.  I was looking at the menu of this small Indian restaurant when a Brit who was sitting at one of the two outside tables offered an unequivocal recommendation.  That doesn’t happen often, so I decided to try it.  The food was delicious—the best samosas I’ve ever had and a really excellent butter chicken curry with warm chapati.   The Brit was a regular at the restaurant and joined me for a beer.   The restaurant owner, Lek, was hilarious—he would stop by the table every so often and tell a really corny joke.  My favorite was "I went to see one of the hill tribes yesterday--they had only one left ear."  I was puzzled when I saw him going to the restaurant next door and leaving it with an open beer.  The Brit, Phil, explained to me that many of the small restaurants borrow from each other because they can’t afford to stock everything.

Today I went on a river cruise…..the name of the river is Ping and it flows from here to Bangkok.  The river was very dirty, but when we got out of the city, there was some pretty scenery. 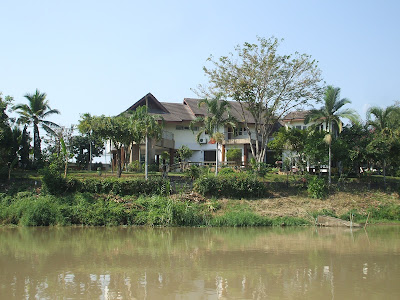 You can easily find the luxurious next door to squalor here in Thailand.  This home belongs to a rich guy who owns some hotels and restaurants. 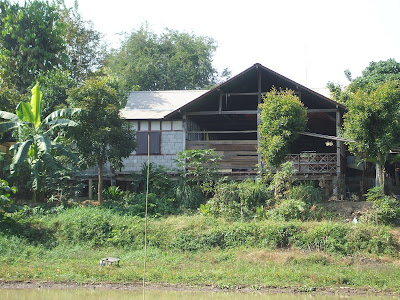 And this is his next door neighbor.  These pictures are a little deceiving on size--this one is much smaller than the one above. 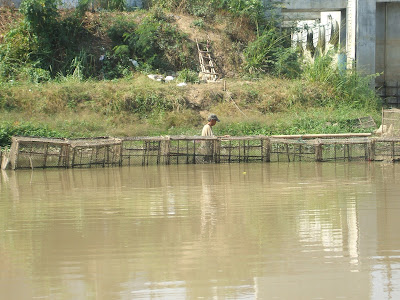 There were several people fishing with a simple pole, but this fellow was really serious about it with all his fish traps. 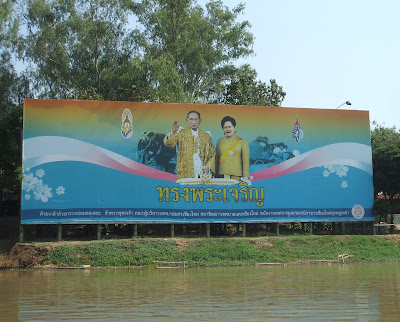 There are billboards of the King and Queen of Thailand all over the place, including the riverside. 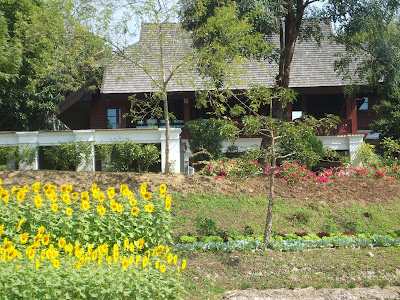 I think our guide said that this was a home belonging to one of the royal princesses.  There was a field of sunflowers on the bank in front. 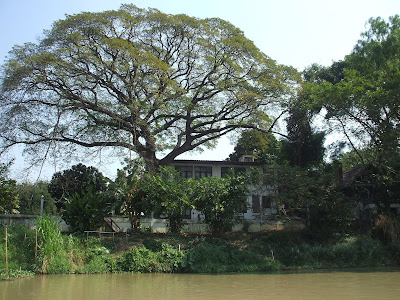 Our end point was a Thai farm, which was definitely not a typical farm.  It was a tourist attraction designed to show us the variety of plants and animals on farms in Thailand. 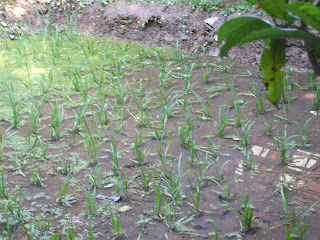 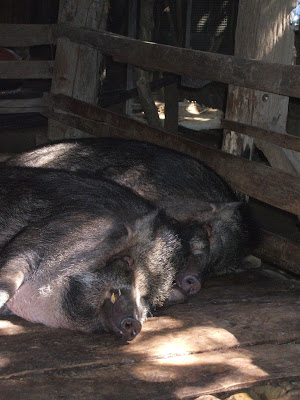 And some snoozing boars

There were also bunnies and chickens and all different kinds of fruits, vegetables and herbs.

After the tour, I went to a restaurant that had been recommended by my travel agent and also had really good reviews on Trip Advisor.  It was an Indian/Thai restaurant in a very beautiful setting. 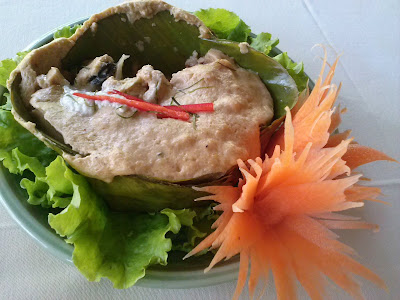 I had this absolutely delicious steamed seafood curry.  I took out a big spoonful before I took this picture so you could see how the curry “stands up”.  It was steamed in a bowl made of banana leaves and garnished with spiky carrot flowers.

I’ve never had a steamed curry.  I was told it was made with red curry paste and that the dish was partially cooked before it was steamed.  There’s a whole egg in it, which is why it doesn’t have the usual reddish color.  The texture was something like a wet soufflé.  There were shrimp, calamari, sea bass, and mussels in it, and I ate every bite. 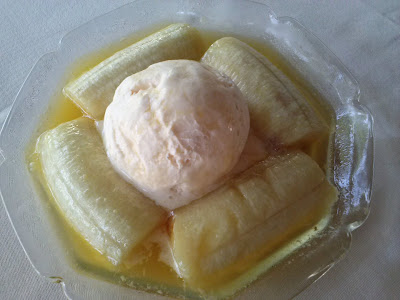 For dessert, I had bananas cooked in a syrup of orange and lime juice, sugar and cinnamon, topped with vanilla ice cream….yummy.

Corny joke. LOL And you need to learn to make that banana dessert. Yum.--Ton

This is my first time i visit here. I found so many entertaining stuff in your blog, especially its discussion. From the tons of prom dresses store, wedding accessories cheap, leather shoes for men comments on your articles, I guess I am not the only one having all the leisure here! Keep up the good work.