I thought I was “templed out”, but I hadn’t yet seen Wat Phrathat, the Buddhist temple that sits at the peak of Doi Suthep, a mountain of 5500 feet about 15 kilometers from ChiangMai.  This is the most beautiful temple I’ve seen in northern Thailand.  The first chedi here is said to have been built in 1383, and legend has it that there is a relic of Buddha, part of his shoulder bone, buried underneath the temple. 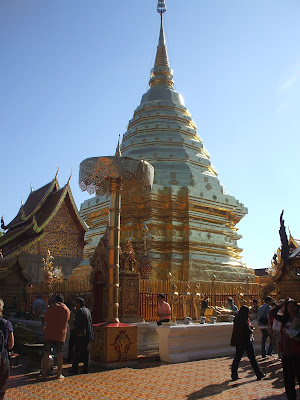 This is the sacred chedi under which this holy relic is said to be buried. 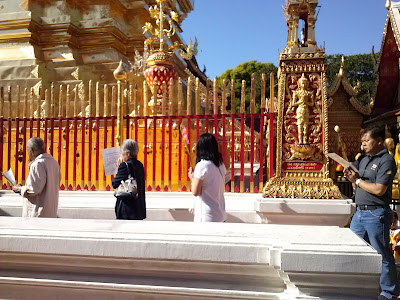 People walk around the chedi three times saying their devotional prayers…..linking them to the legend of the elephant that carried the holy relic to this mountain top, circled it three times and then died. 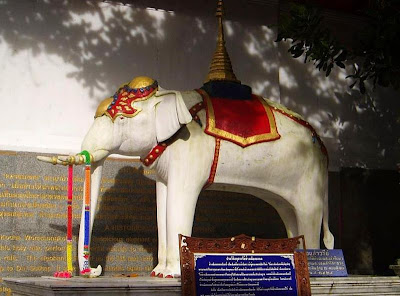 This is the shrine to that elephant. 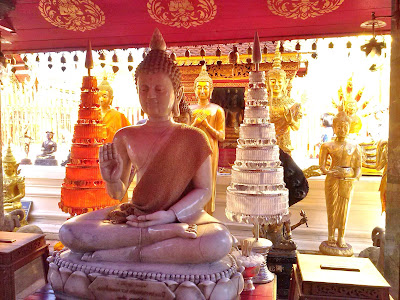 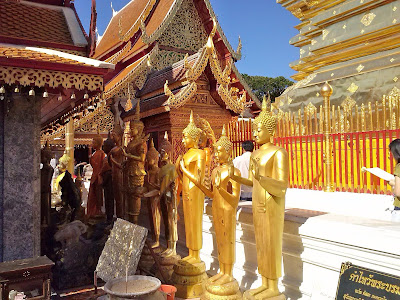 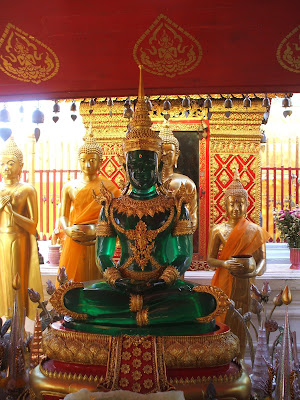 And more buddhas.....To me, this replica looks more like an Emerald Buddha than the real one in Bangkok. 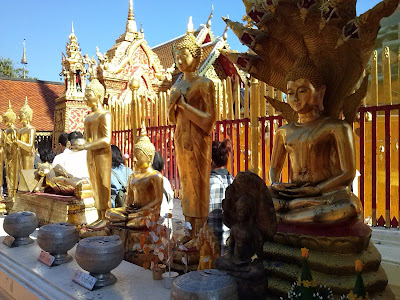 People here know the day of the week they were born and there’s a different Buddha position for each day.  People put their donations in the collection container in front of the Buddha that’s in their birth day position.  Do you know what day of the week you were born?  I was born on Thursday, and my Buddha is the third from the right.

The Thursday Buddha image is sitting in a full lotus position with soles upward and visible, the hands resting in the lap, right above left with all fingers extended, palms upward.  In this position, some believe the body is receptive to energy entering through the top of the head and through the open palms.  I'll have to try that when I'm feeling a need for an energy boost! 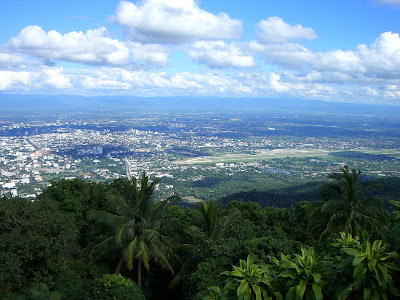 This is the view of ChiangMai.  You can see it’s a sprawling city, and it’s growing rapidly.  Some of the locals I spoke with are planning to move further north to ChiangRai because this city is getting too big for them.

On the way down the mountain, we stopped at the royal winter palace, Bhubing Palace, where the royal family stays during their seasonal visits to northern Thailand. 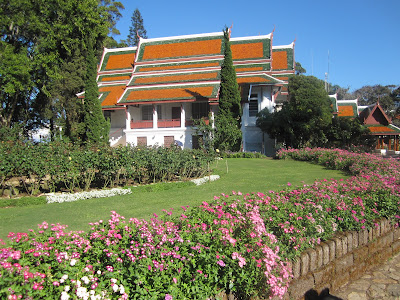 I didn’t see the palace, because there are renovations taking place, but here’s a picture from the website.  Pretty modest by European palace standards.

Again, whenever the royals are involved, the gardens are exquisite. I could have spent the day here just enjoying the perfect weather and the beautiful surroundings. 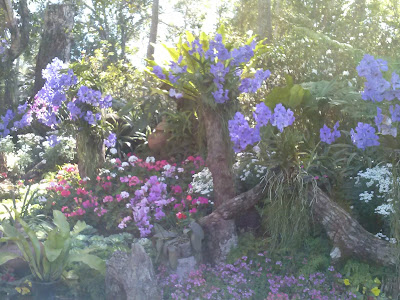 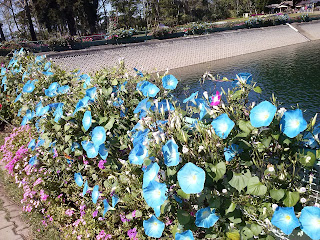 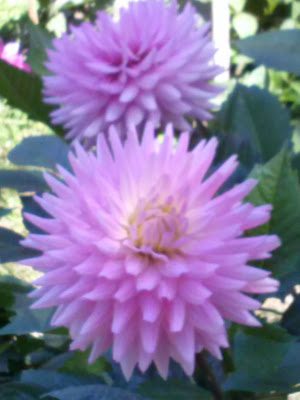 I have lots more pictures of flowers....they were everywhere! 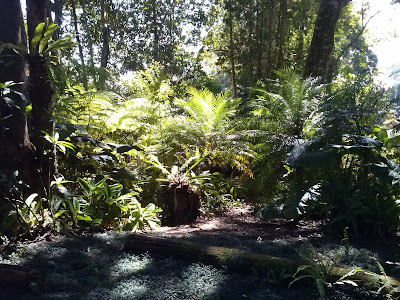 I think the queen likes ferns.  The fern gardens I've seen have been named for her. 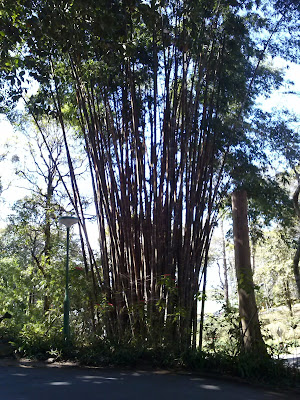 A stand of bamboo trees. 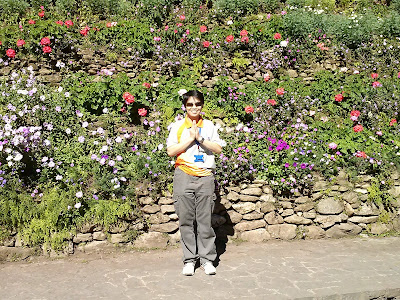 This is May, the tour guide.  Her tour company has 20 guides, and I had her for all three tours I took with this company.  She says that’s happened to her only once before.  She’s a great tour guide, very knowledgeable, with a wonderful sense of humor.

And I went to yet another cooking school.  The experience was similar to others I’ve had, but the class was smaller, just 6 of us. 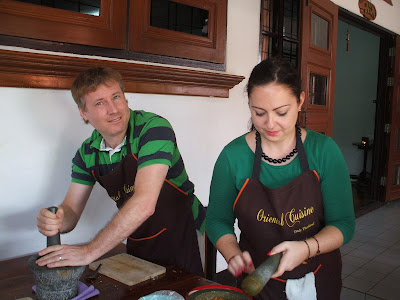 Nerys and Jess from London making their curry paste.  You have to pound, pound, and pound some more to get it to the right consistency. 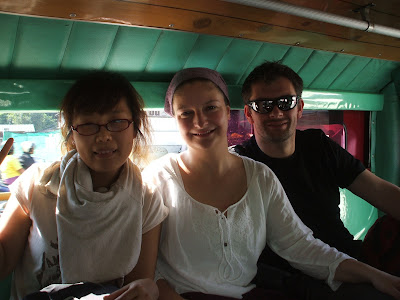 Moon from Korea, and Doreen and Roy from Germany The market we visited had an area where there were rows of table like this where workers were butchering meat.

I made some different dishes here, but I think you’ve probably seen enough of the Thai food I’ve cooked.  If you need any Thai recipes, I'm your go-to!  I now have three recipes books.  Remind me to give you one from the Siam Rice Cookbook.  Theirs were the tastiest.

I also made a new friend here—an American expat, originally from Madison, Wisconsin.  We met at an Internations.com event last week and had lunch this week.  Connie is a recently retired high school counselor who moved to ChiangMai from HongKong in July.  After just a few months, she’s decided that retirement isn’t for her, and she’s planning to re-enter the work force, hopefully back in HongKong.  Her eyes light up every time she mentions this city’s name, so you know there’s a love affair going on there.  Connie told me that during March and April, the air quality in ChiangMai is seriously polluted by the burning of farms fields in the surrounding area.  She might come to visit me in Florence to escape the ashes.  Connie introduced me to her hairdresser, and I’m no longer a Marilyn Monroe blond!

I’ve really enjoyed my time here in ChiangMai, and I’m sorry to be leaving.  Being a small town girl at heart, I found this city to be much more comfortable to navigate.  It’s about the size of Grand Rapids, Michigan, where I lived for 11 wonderful years.

I’m also leaving Thailand…on Sunday, I schlep me and my luggage to Hanoi, Vietnam, where I’ll camp out for the next month and look for new adventures.  My only regret is that I didn’t make any Thai friends.  Most people here who are my age don’t speak English.  But, again, I met a lot of really interesting people from all over the world, and that's always fun.
Posted by Unknown at 8:13 PM

Love the humor! Congrats on your first elephant ride.