I knew it was going to be very hot last week, but I was running out of time to see some of the sights that require being outside, so I decided to start early, thinking I’d avoid the hottest part of the day.  I caught the 9 a.m. shuttlebus, which took me to the sky train, which took me to the pier, where I caught a boat to the Grand Palace.  This is the top sight to see in Bangkok.  It was 10:30 by the time I purchased my ticket and one of those audio devices for a self-tour.

The Thai monarchy has been in existence since 1238.  It transformed from an absolute monarchy to a constitutional form in 1932, after a coup revolution.  The current king His Majesty King Bhumibol Adulyadej is the world's longest reigning monarch and head of state. 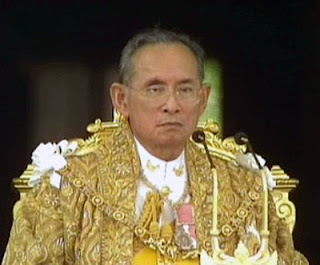 He celebrated his 85th birthday the second week I was here, and the massive crowds in the streets that day (a national holiday) were a testimony to the reverence accorded him by his Thai subjects.  From what I've been told, this king has done much for the people of Thailand to help them improve their economic status.  If you say or write anything derogatory about this monarch, you could be imprisoned.  So Thais take their royalty very seriously.

The monarchy's official residence in Bangkok is the Grand Palace, and the palace grounds are the top tourist site in the city.  The grounds are a huge complex of buildings, some dating back to the early 1800's, covering 53 acres, and even with a map and my audio device guiding me, I had a hard time figuring out what was what.  Here's a view of the grounds from across the river, just to give you an idea of how vast it is.

One of the big draws is the Temple of the Emerald Buddha, which is a complex of buildings itself. 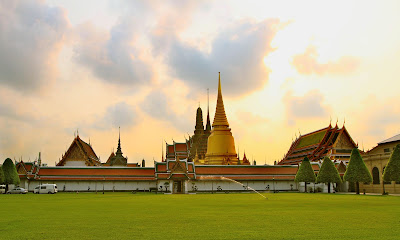 Many of the buildings weren’t open to the public, and you weren’t allowed to take pictures in the ones that were.  So here is someone else's picture of the Emerald Buddha. 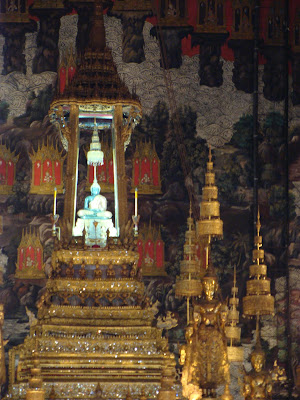 I was surprised at how small it was.  I had to look around a bit before I noticed it high atop this elaborate gold throne.  There’s a boatload of gold here.  And the Buddha isn't really made of emerald....it's jade.  The King changes the Buddha's clothes 3 times a year to signify the changing of the seasons.  This Buddha has quite a history, too long to share in this blog, but it's traveled to a number of countries in Southeast Asia, and a number of cities in Thailand.

The photos above aren't mine, but now I’m just going to share some of the ones I took that will give you an idea of the opulence of royalty in Thailand. 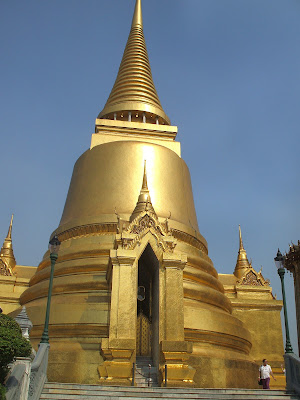 This structure is called a chedi, or a stupa.  You see these bell shaped towers in most of the major temples.  You can go inside some of them, and others were used as tombs for royal family members.  This is the only one I saw that was covered in gold leaf.

Gold in Thailand means something sacred or imperial, so you see a lot of it.  You also see a lot of temples.  In Buddism, the building of a temple is one way to make merit.  "Merit" is a good deed, act or thought, and Thais believe they are accumulated and carried over into future incarnations.   So kings often built temples to make merit for themselves and their families. 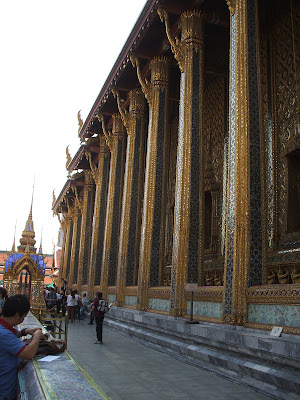 This is a partial view of the temple that houses The Emerald Buddha.  (There's no way to get a whole building in a shot here, because the buildings are very close together.)  You have to remove your shoes to enter any temple in Thailand.  And there's no "shoe guard", so you have to just hope no one likes your shoes better than their own! 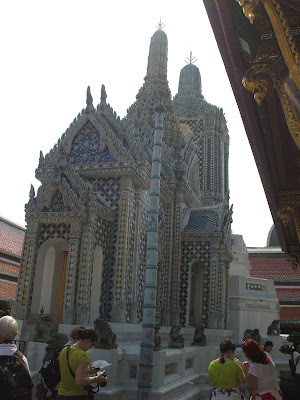 This isn't a great picture of this structure, but look at the close up I took of the detail.  Awesome! 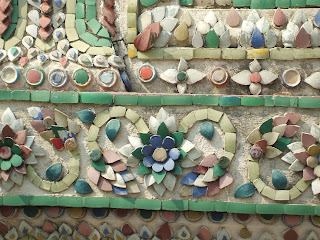 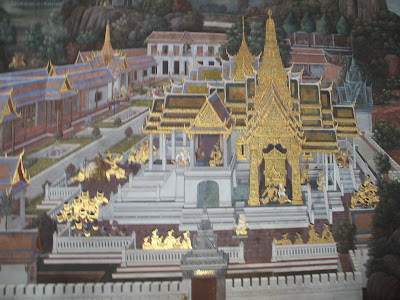 Along a wall of one of the courtyards was a covered walk, and the whole wall was a mural of scenes like this.  It was absolutely stunning.

There were lots of guards...some human.... 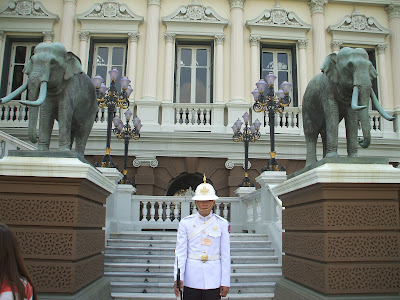 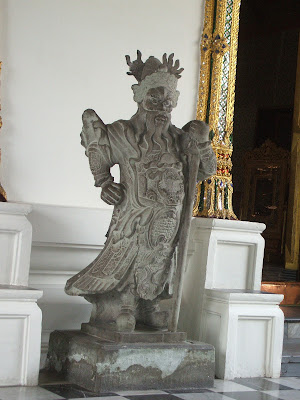 And some of another variety. 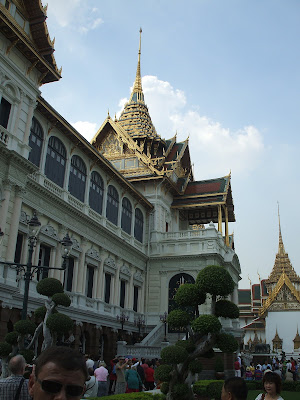 Another impressive building...there was a weapons museum housed in this one, along with other stuff not accessible to the public. 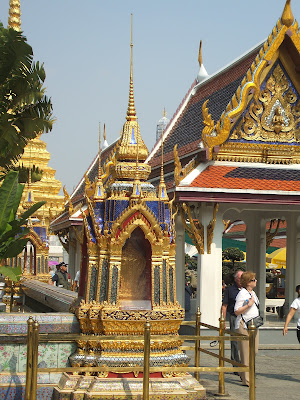 Just a pretty little thing...these were all over the place. 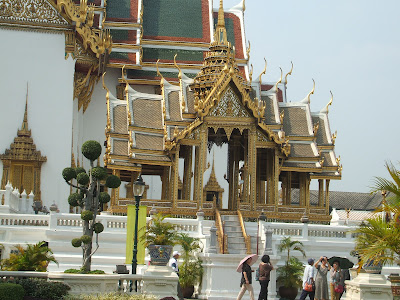 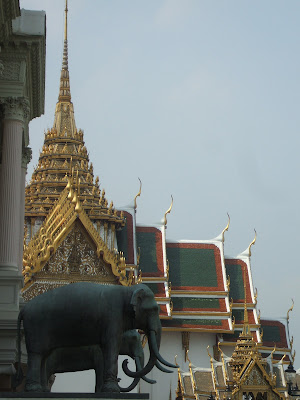 I took over 80 photos, but I think this gives you a good idea of the reverence for royalty here and the opulence of the royal grounds.

After a couple of hours of touring, mostly outside in the hot, hot sun, I was afraid I was going to have a heat stroke.  I felt pretty sick.  I ducked into an air conditioned restaurant across the street from the royal complex and was seated at the same table with an Indian woman who happened to be from northern California and lives very near to my older sister. She was on her way to visit relatives in India and had a 12 hour layover in Bangkok.  Rather than be bored at the airport, she decided to take the opportunity to see a few sites.  We had a really nice visit.

After lunch, I was still feeling a little sick, so I decided to call it a day.  You have to allow for quite a bit of time to get somewhere and back.  I just missed a boat and had to wait about 20 minutes for another one.  Then I couldn’t get a taxi back to my apartment, so I walked the mile back and that pretty much did me in. I’m praying that the temperatures in ChiangMai will be kinder to me.
Posted by Unknown at 12:12 AM