CHRISTMAS IN THE KINGDOM OF SIAM

I really didn't want to spend Christmas Day alone, so I booked myself on a food tour to Ayutthaya, which is the former capital of a Siamese kingdom of the same name.  Ayutthaya was friendly toward foreign traders and the influence of Chinese, Vietnamese, Indians, Japanese and Persians and Portuguese is evident to this day in the architecture, the food, and the genetic makeup of the Thai people.  In the 16th century, this capital city was considered to be one of the wealthiest and biggest in Asia.  There have been many wars with Burma through the centuries, and it seems that Burma mostly won. During one of these wars, the capital city of Ayutthaya was thoroughly sacked and burned.

The ruins of Ayutthaya are a UNESCO heritage site (I've seen a few of these, haven't I?), and my food tour included visits to a few of the temple ruins.

Ayutthaya is about 80 kilometers north of Bangkok, so I got to see some of the surrounding countryside, which is primarily rice fields.  This central part of Thailand is known as the Rice Bowl.  At one time, transportation was primarily by canals and rivers.  We, however, traveled in an air conditioned van on a toll expressway.

First stop was for a breakfast of noodles.  Yep, Thais eat either rice or noodles for breakfast.  According to our guide, Olive (her self-selected nickname, because she likes them), most Thais don't cook their meals at home.  They eat street food, because they're too busy making ends meet to cook their own meals and don't have adequate kitchens anyway.  We had two noodle dishes...one with beef... 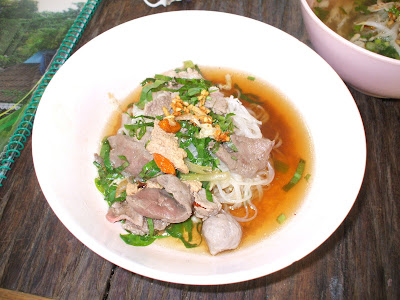 And the other with chicken.... 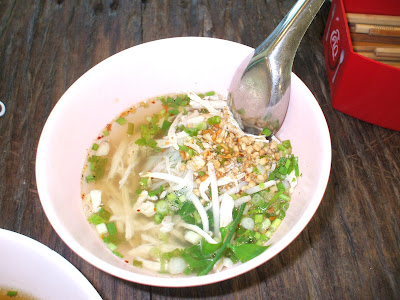 Both were delicious.  Unfortunately, I left my menu card in the van, so I can't tell you the names of any of these dishes, but they were aromatic and very flavorful.  You could add hot spices if you wanted.  That was true of most of what we ate, and I really appreciated having the choice.

Afterward we were given some Thai candy, which wasn't sweet at all.  It's made of bean curd and colored with natural ingredients.  It's pretty to look at, but not that good. 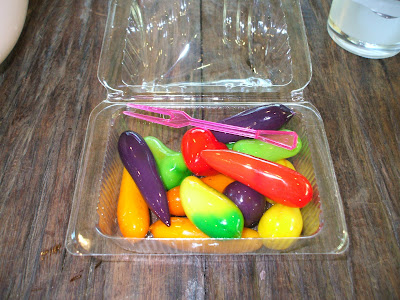 After breakfast, we went to a museum, where our guide walked us through a brief history of Ayutthaya.  She was very knowledgeable and spoke English quite well.  I understood about 80% of what she said.

Then we went to the ruins of a temple.

These are the two couples who were with me on the tour at the entrance to the temple ruins... 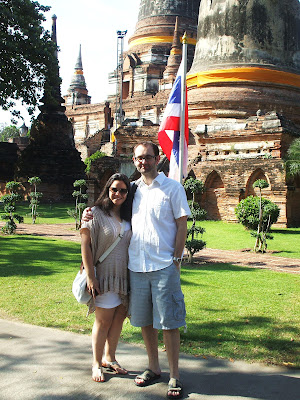 Colin (from Scotland) and Susanna (from Mexico) 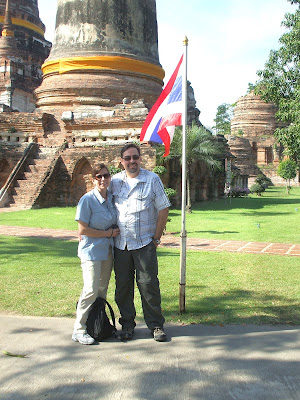 John and Tonya from Maryland (near Washington, D.C.).  These two are world travelers...they don't have kids...they take two trips a year plus long weekends in places like London and Paris.  John was born in Ypsilanti, Michigan and lived there for his first seven years.

There were lots of stupas at this temple.  We climbed to the top of one that had an open chamber room at the top where there were 6 sitting Buddhas.  My camera batteries failed me around this time, so I don't have pictures of the chamber. 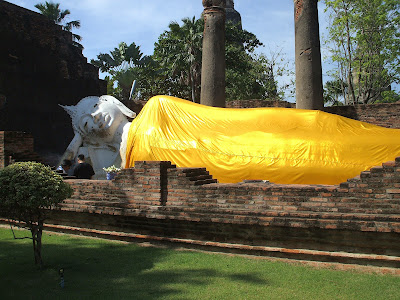 On the way out, we passed this reclining Buddha (camera worked for two shots, then quit again)...draped in gold, which has sacred meaning to Buddhists. 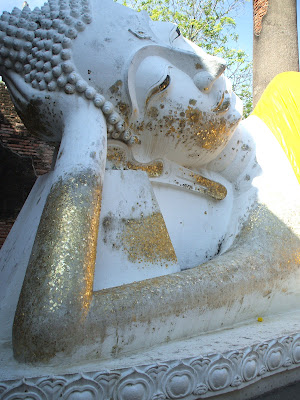 Here, and in the chamber of the stupa, people bought little squares of gold foil, pressed between white paper, and rubbed them on the Buddhas.  This is apparently a way of showing honor to Buddha.  That's what all the gold is on this Buddha.

Time for a sweet snack. 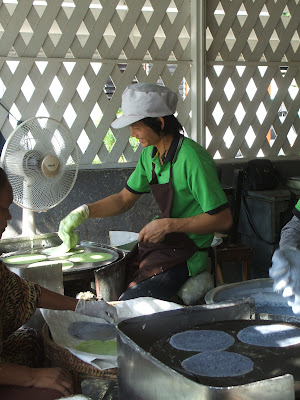 There were two young Thais hand crafting a kind of soft sweetish taco--one was a bluish color and the other was green--naturally colored with some vegetables, I think.  I was across the street buying new batteries when it was explained. 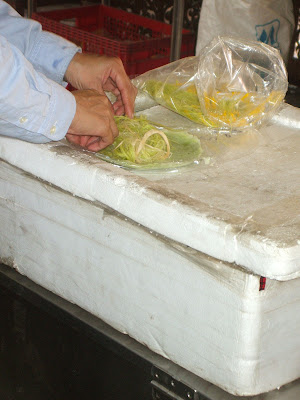 Then yellow or green spun threads of sugar cane are rolled into the "taco". 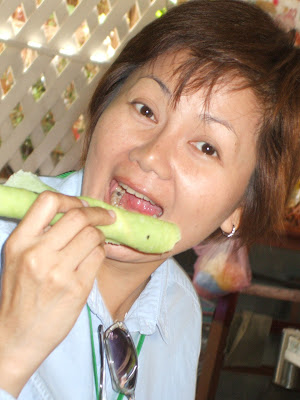 And you have a really tasty sweet snack.  This is our guide, Olive.

Time for Temple Number 2, traveling this time by riverboat.....which was very refreshing, because now it's close to 11 a.m. and it's getting hot.  Some shots along the way........ 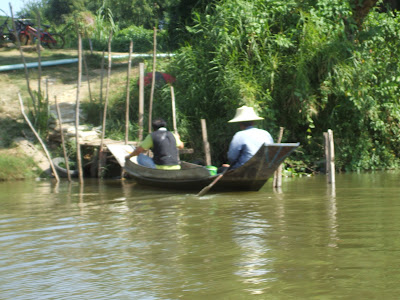 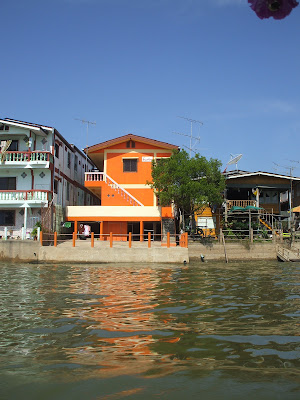 I liked this bright orange house. 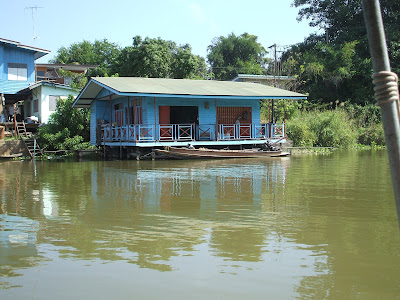 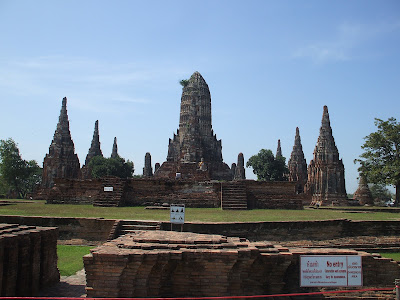 We weren't allowed to explore the grounds here.  The large stupa houses the remains of a Thai king and the smaller ones some of his family members.  The larger one is an example of Cambodian style architecture.

Now we're off to lunch.  This hindu god--half human, half elephant--greeted us near the entrance to the restaurant. 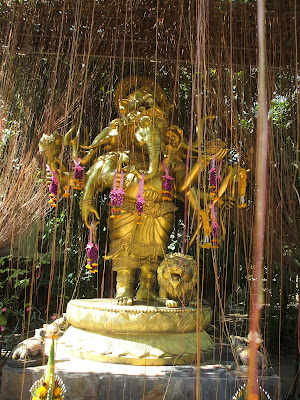 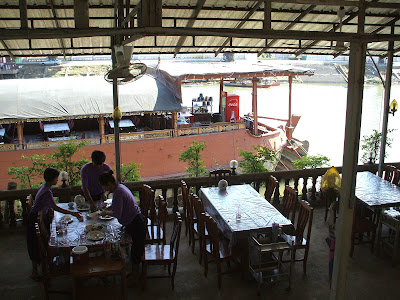 Lunch by the river.....what could be more pleasant? 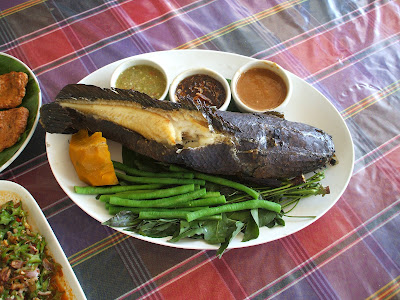 I think this is snakehead fish....not pleasant sounding, but tasty....with yam and green beans. 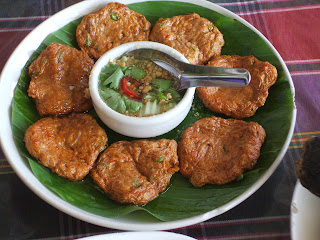 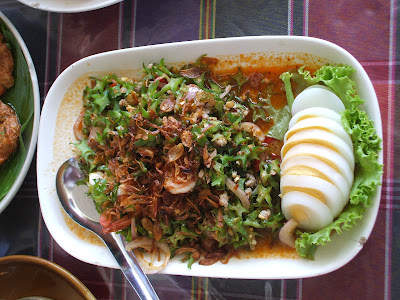 A very tasty salad, and I wish I could remember its name, because I loved it.  It had shrimp and red onion in it, and you can see the egg, but I can't remember the name of the green vegetable, which was the main ingredient. 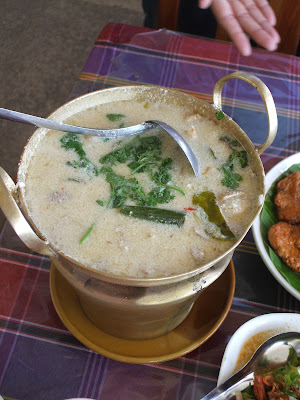 And a typical "Yum" soup with chicken and lemongrass and mushrooms.

Off to Temple No. 3.  More stupas and another Buddha. 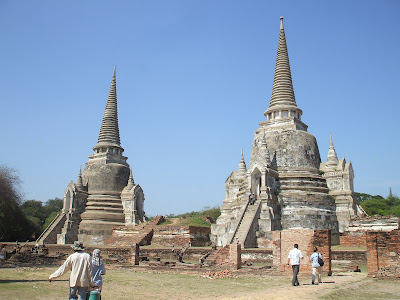 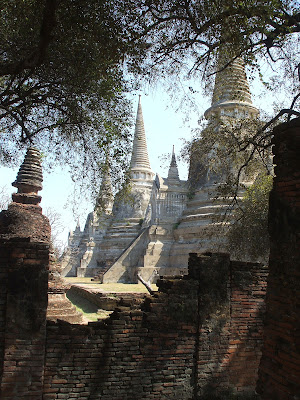 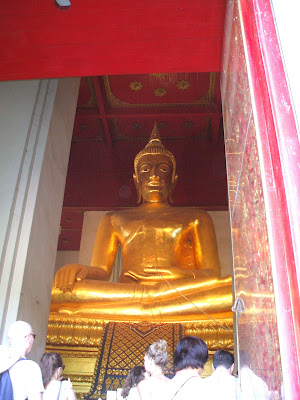 And then to our last food stop, where we had these delicious river prawns..... 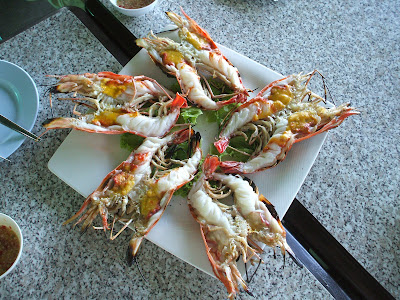 And also some very spicy hot soup.....forgot to take a picture of that, but I didn't eat it.

Now it's 3 p.m. and very hot, and we head back to Bangkok.  A car hit a truck that was right beside us on the freeway into the city, but we were fortunately just far ahead enough to get by it with no delay.  Olive told us the government is encouraging people to buy cars by giving tax breaks to people who buy their first car.  I have no idea why anyone wants more cars on the streets of Bangkok!

I'm leaving Bangkok tomorrow.  I haven't yet commented on the number of old white guys you see here with young Thai women.  You hear about it, and then you get here and find out it's absolutely true.  Very sad.

Nice Pictures. I love the grilled shrimp in Ayutthaya.

The "tacos" are called Roti Sai Mai, and the salad is Yum Tua Poo. The vegetable is Wing Bean, I think.

Thanks Scott....it was wing beans. Now I can look for this salad on menus!