I need a navigator (any volunteers?).  While I’m doing well finding my way to and from places by car, once I get into a city, I can’t find things.  When it’s a small town, no problem….I can just get out of the car and walk around.  But in a city the size of Siracusa,, with a population of about 125,000, it was impossible to drive and then try to find streets where there were sites I wanted to see.  So I just headed for Ortygia,, the island where the old city is located.  I parked by the bridge into the city and set out by foot to explore because I wasn’t sure how difficult it might be to find a parking spot on the island.

The city is notable for its rich Greek history, culture, amphitheaters, and architecture, and it was the birthplace of the mathematician and engineer Archimedes.  This 2,700-year-old city played a key role in ancient times, when it was one of the major powers of the Mediterranean world.  The city was founded by Ancient Greek Corinthians and later became part of the Roman Republic and Byzantine Empires.  Siracusa is listed by UNESCO as a World Heritage Site.

This was my first sighting upon entering the streets of this ancient city….the ruins of the temple of Apollo…. 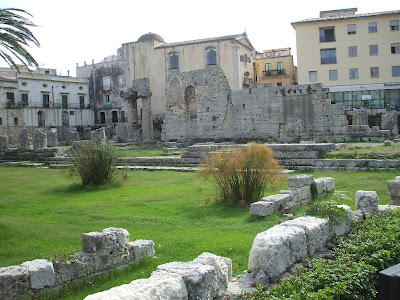 Then I came upon this large and colorful outdoor market………… 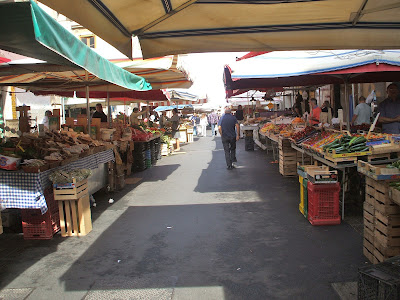 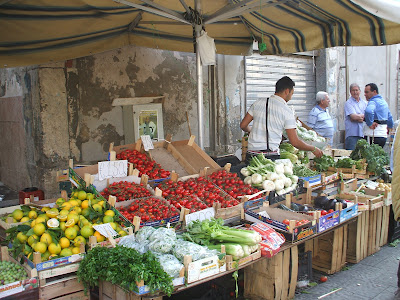 The various types of tomatoes here are bright red and delicious…… 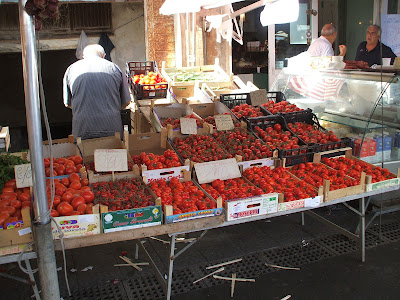 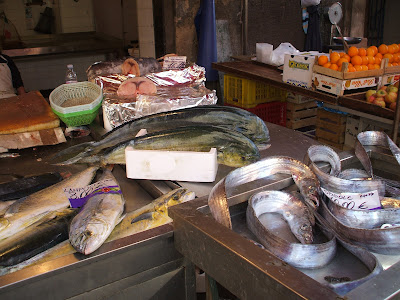 And several vendors of fresh fish....that coiled fished on the bottom right is an eel.

And one lonely flower vendor…………… 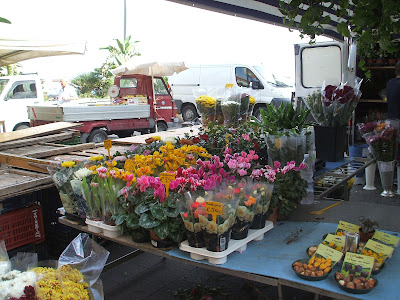 There were also vendors of meat, cheese, nuts (pistaschios are grown locally), olives, bread, pastries, etc.  I wished I could do my grocery shopping here every day!  I wanted to buy some of that fresh fish, but thought my car would be pretty smelly for the drive home.

I continued to wander down narrow streets like this………. 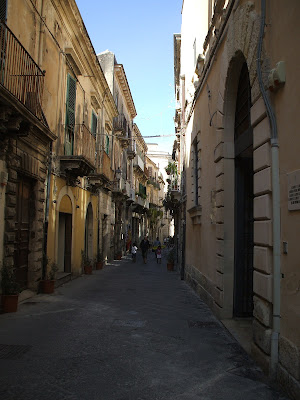 And, believe it or not, you have to keep your eyes and ears alert for cars and motor scooters!

I came upon the large Duoma Piazza, where this cathedral dwarfs the buildings around it in size and beauty………….. 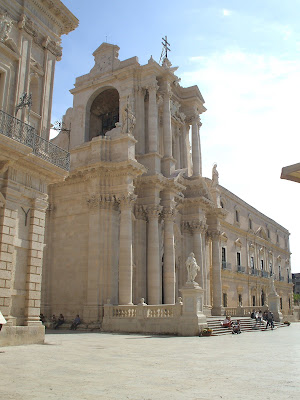 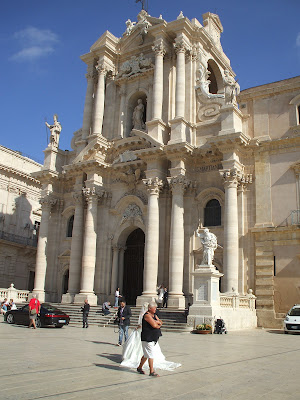 The cathedral was built by bishop Zosimo in the 7th century. The façade was rebuilt in 1725–1753, with a double order of Corinthian columns, and statues by Ignazio Marabitti.

There was a couple there having a wedding photo shoot.  I didn’t realize until I was cropping this photo that I caught the bride with her skirts up….. 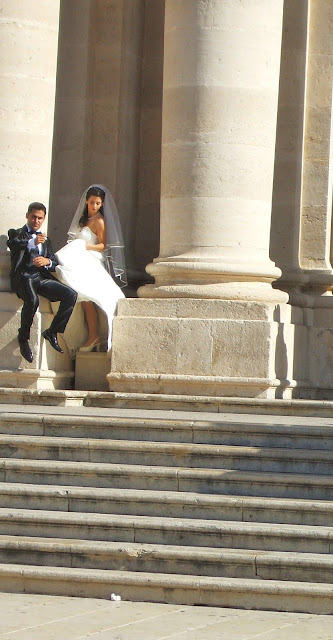 There was another couple in the plaza, waiting for their turn for wedding photos.  You can see the bride's gown framing the guy in the front of the photo above this one.

Also in the piazza is the Basilica of Santa Lucia, a Byzantine church built, according to tradition, in the same place of the martyrdom of the saint in 303 AD. 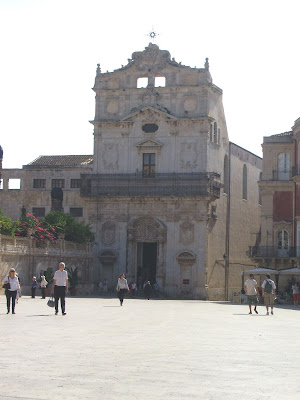 The current appearance is from the 15th-16th centuries.  A painting by Caravaggio, the Burial of St. Lucy, hangs at the back of the altar.  Of course, no photographs of this work were allowed. 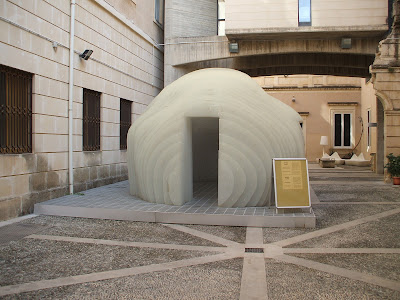 Along one street, I came upon this display of sculpture by a Japanese artist, whose name I can’t remember………… 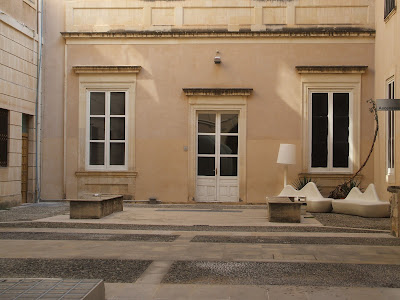 This very contemporary display seemed out of place in this ancient city.

I was checking out menus of trattorie and bars as I wandered.  I decided to have arancini for lunch.  Arancini are balls of risotto filled with cheese and meat and/or veggies, then rolled in bread crumbs and deep fried.  I had made some arancini last Christmas as an appetizer for my Italian Christmas menu, and I had one for a snack when I was visiting Ischia.  But they are a Sicilian specialty, so I knew I had to try them here.  The ones I made and the one I had in Ischia were the size of a ping pong ball.  There were 8 varieties on the menu, so I thought I could easily eat four, so I ordered four different kinds.  Sorry, I forgot about taking a picture before I had already eaten part of one….. 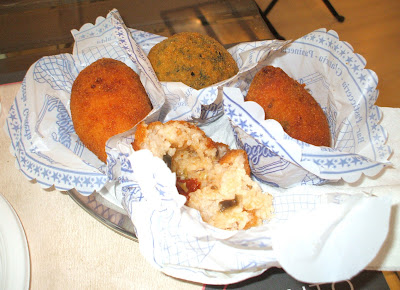 I was slightly shocked when they were brought to the table, because these were as big as a large peach!   This was particularly surprising because they cost only 1.5 euro each.  Two would have been a bargain and a hefty lunch for me.  I ate the insides of all of them along with about 1/3 of the surrounding rice.

After lunch, I wandered around the edges of the island and took these shots…… 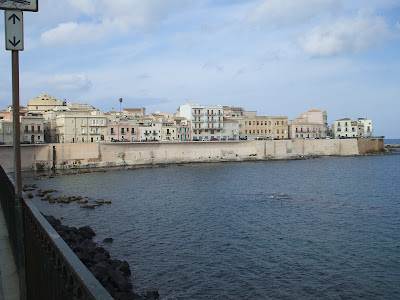 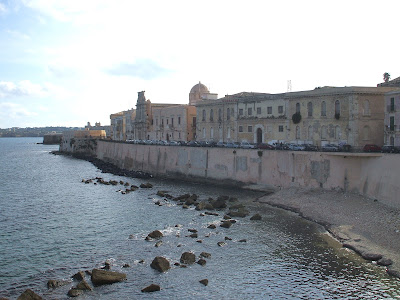 Can't you just see the history oozing all over this place? 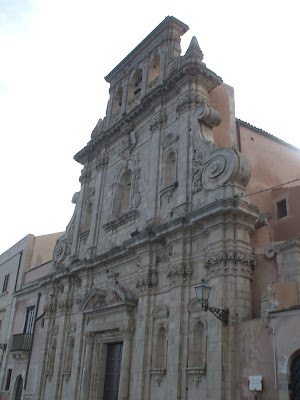 I wonder how old this building is. 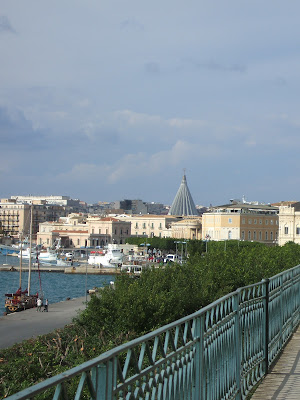 This is the newer part of the city where you can see the modern Church of the Madonna of the Tears rising above the other buildings…….. 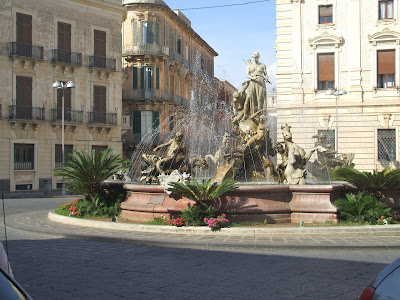 One the way back to my car, I found the Fountain of Diana in the Archimedes Square.

I got lost for a while on the drive home....for some reason, I have trouble finding the autostrade.  I started following the signs, but then I must have missed one, because I ended up on a country road going who knows where.  I decided that as long as the sun was on my left arm, I was going north and that was good, so I just kept driving through this beautiful countryside with its groves of olive trees, fruit trees, and vineyards.  I eventually saw signs for the autostrade again, and this time, I found it.
Posted by Unknown at 3:20 AM

Hi Colleen, Siracusa looks wonderful. You caught it right with the oozing history statement. Sounds like you're having a great time - Cheers, John