Those closest to me are probably a little worried.  “What’s going on with her?”......they might be asking.  “Why hasn’t she written anything about food yet?  The woman writing this blog may be some imposter posing as our foodie friend Colleen.”

No, I haven’t suddenly switched to the “eat to live” camp.  It’s just that since I’m going to be here for so long, my budget can’t handle eating out all the time.  So I eat out two or three times a week.  Okay, some of you might be thinking, why aren’t you raving about the wonderful food you’ve eaten those two or three times?  Well, I might be if I could keep an internet connection long enough to really check out which are the best restaurants in Sorrento.  The best meal I’ve had so far was a dinner at a lovely beachside restaurant in Positano, with my New Zealand and Swiss pals.  It was sea bass, prepared to perfection, in a simple olive oil and lemon sauce.  I lingered over every bite.  (There, doesn’t that sound more like me?)  Their caprese salad, fresh tomatoes with fresh buffalo mozzarella cheese and basil was also wonderful.

My landlady, Signora Cacace, owns a trattoria called Da Emilia.  Emilia, her mother, opened the trattoria in the late 1940’s, and now daughter Irena runs it.  Rick Steves has recommended it, so it gets a lot of business.  Her Sorrento style gnocchi are really good—in tomato sauce with fresh basil—and there’s a platter of lightly fried local fish that I also like, including fresh anchovies, a new experience for me.  Here are some pictures I took at Da Emilia:

The restaurant has two seating areas, one right by the water….. 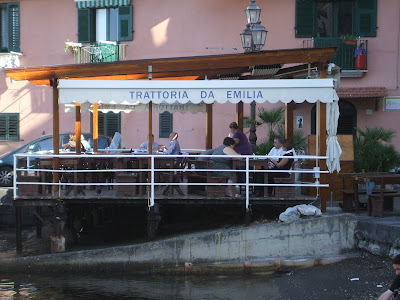 Plus a covered patio and seating in the trattoria proper.

Signora Cacace (and me)…… 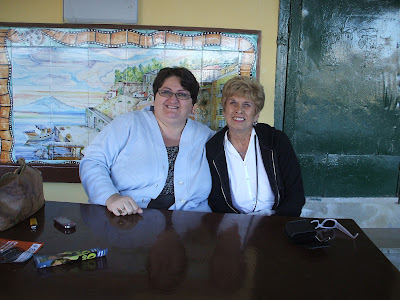 elow a pictures her mother Emilia and her father….. 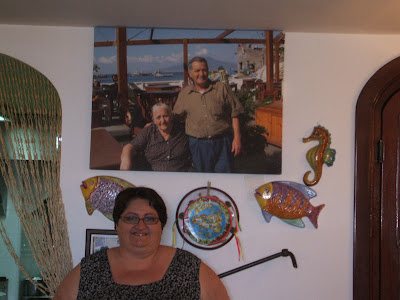 Here are some of the items on her menu:

Insalata mista, which is on every restaurant’s menu and is different at every one of them….. 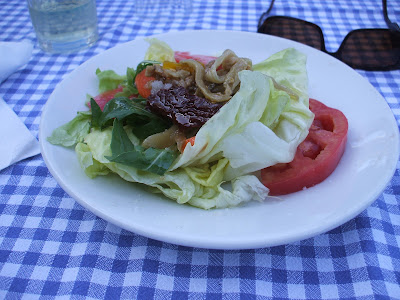 Insalata with tuna and tomato….. 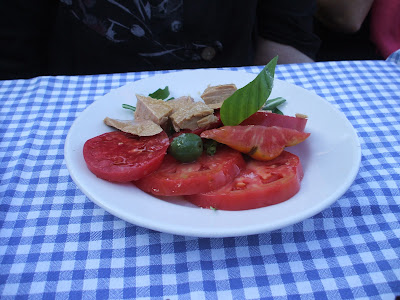 One of my favorites, gnocchi Sorrento style (with tomato sauce and basil)…… 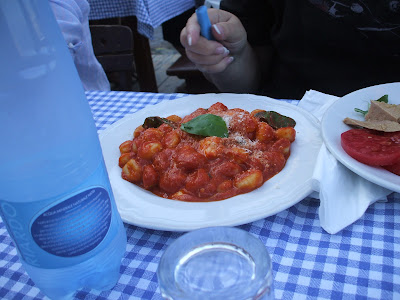 Ravioli (with ricotta cheese inside)….. 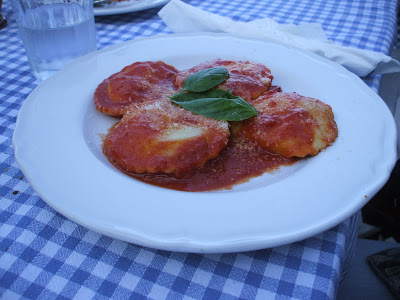 Lightly fried sardines, yum……this technique of lightly battering fish and frying them is typical in the Napoli region……. 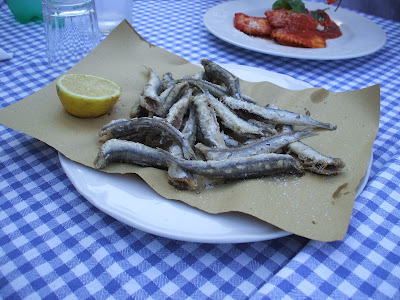 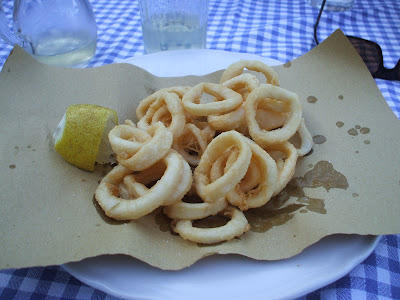 A delivery of fish that were caught that day…… 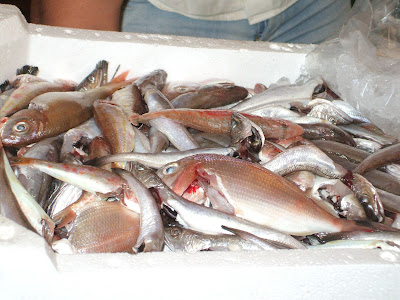 I’ve also been to a couple of other restaurants in the marina and had some very good seafood risotto at this one……. 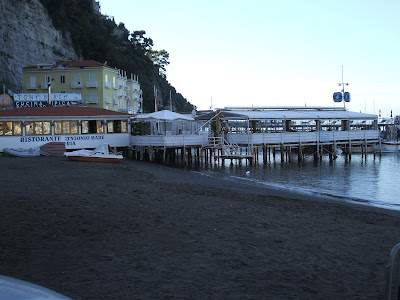 This restaurant is owned by five sisters, but only two of them were there when I took these pictures….. 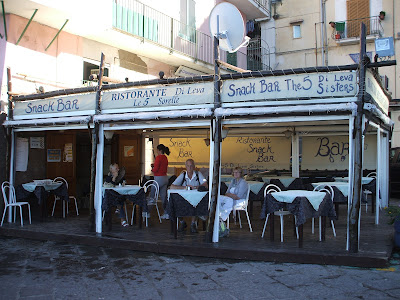 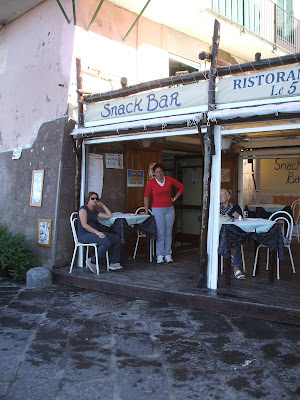 Both these sisters are quite aggressive….they call to people as they walk by, asking them to eat at their restaurant, and sometimes they walk up to people and hand them a menu.  They have a bad rep in the marina for their aggressive behavior, as well as pretty mediocre food.  Their restaurant is attached to my apartment building.

Yes, I’ve had pizza, too, but I’m probably not the one to judge whether the pizza here is better than the U.S. or not, because I rarely ate pizza at home.  The options for toppings are more limited here, as with everything else.  The best pizza I’ve had so far is one I ate in Cassino when I visited my friend Antonio.  I had the classic Margharita style, and the buffalo mozzarella and the crust were both divine.  (Yes, it really is me.)  The Napoli region is known for its buffalo mozzarella and, fresh or aged, it is absolutely delicious.

Sorrento is a pure tourist town.  The menus here tend to be very similar, and everything is a la carte.  Frankly, I haven’t been wowed by the food here, which was a disappointment, because I had such a wonderful culinary experience when my niece Shelley and I were in Italy several years ago.  Maybe that’s because I had done a lot of research and selected great little trattorie for our meals.  She and I would usually order an antipasto, a primi (usually pasta) and secundi (meat or fish) and share each plate.  And, of course, we had our daily gelato fix.  I don’t have gelato every day—maybe three times a week, and my favorite place has about 80 flavors.  I won’t be here long enough to try all of them.

As I mentioned in my last post, I ate Chinese food in Cassino, and it was quite different than what we get in the U.S.  The spring rolls I had were very crispy, but I couldn’t identify anything but cabbage inside.  I ordered rice spaghetti with seafood and got a lot of spaghetti and a smidgen of seafood.  The sauce was very bland.  I finally saw a little bar in Sorrento that has hamburgers, and I went there this week to have my “cheeseburger fix”.  It was at the quality level of McDonald’s….a bit disappointing….and yet, it was enough to remind me of what a burger tastes like.

There are typically no sides that come with your entrée, so you have to order a side salad or vegetable to go with your pasta, fish, or meat.  Even if you order just one course with a side salad, your bill will usually be 20 euro or more, because you pay for water and there is a table cover charge included in your bill. (I’m told it’s for the use of the cutlery and table linens).  But, you don't have to tip here, unless you want--according to my Italian friends, it isn't expected.

I haven’t been able to cook here like I did at home, because:

a.   I don’t have all the kitchen equipment I need—e.g., no food chopper, no food processer, no blender, not even a vegetable peeler or a whisk.  I tried to find the latter two in a kitchen store here and they don’t seem to have heard of either.
b.  I can’t find many of the ingredients I need for my favorite recipes in the supermarket, e.g., chicken broth!  I really don’t like broth made with bouillon cubes, so I guess if I want to make soup, I’ll have to buy a whole chicken and make my own.

When I do cook, I get my fresh fruit and veggies from Signora Carolina.... 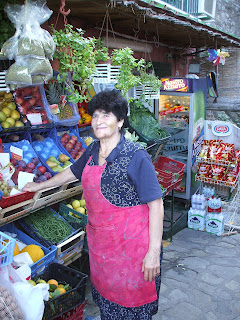 More on food when I get to Sicily.
Posted by Unknown at 8:58 AM