I’m not sure who would win the debate about which island is more beautiful-- Ischia or Capri.  From all the accounts I’d heard about Capri from the many people I’d met who have gone there, I was predisposed to think that Ischia would win.  But after Grace and I spent a few hours there, I’m torn.  I think the fact that we were there on a Monday three weeks after the end of “high season”, and the place wasn’t jammed with tourists, had a lot to do with the impression this island left with me.

The Romans called this island "goat island", and its name may be derived from Latin for goats "capreae".  After putting our bodies through the torture of navigating Pompei and Positano (again), we decided to be kind to our knees and take the 20 euro tour with Guisseppe, the tour guide who “sold us” on the ferry to Capri.  We left the harbor on a small tour bus with about a dozen other people and went first to Anacapri, which is perched in the cliffs above Capritown.

All the way, Guiseppe is educating us about the island and pointing out sights in two, or possibly three, languages—Italian, Spanish, and English.  It was difficult to understand him, because he would do parts of the sentences in each language, so you’d have to wait for the “rest of the story” until he said the phrase in the other two languages.  Very confusing.

After he lead us to the famous villa of a Swedish physician/author (Munthe), we had some time to have lunch and explore the area a bit.  There were lots of high end shops with beautiful (and expensive) merchandise.  I guess if all there is to do is window shop, you might as well be looking at some high quality goods! 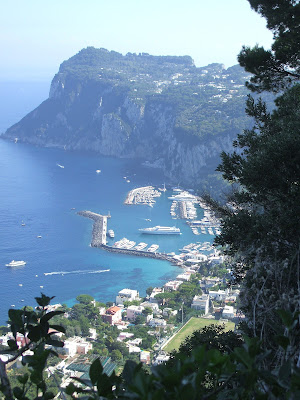 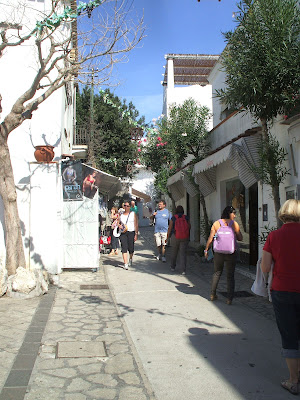 Then we went down to Capritown, also on a cliff—just a lower one.  Guisseppe led us to this house, which is was the Mussolini family house on Capri.... 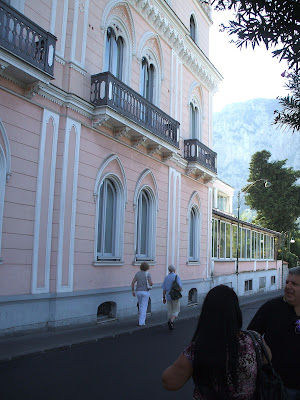 It's really big and beautiful...couldn't get it all in one frame.  Guisseppe made numerous references to Mussolini during our tour, but we couldn't understand what he was saying.

Guisseppe left us on our own to explore Capritown.  We walked down (again!) to these beautiful gardens on the slopes of the town where we took pictures of each other by the famous faraglioni rocks which you see so often in pictures of Capri……………Guisseppe told us that this would be the proof that we were here! 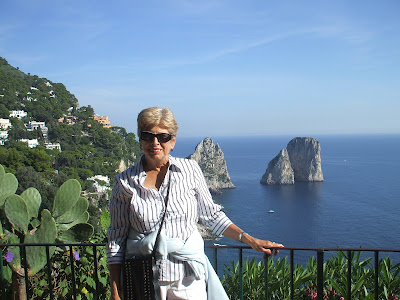 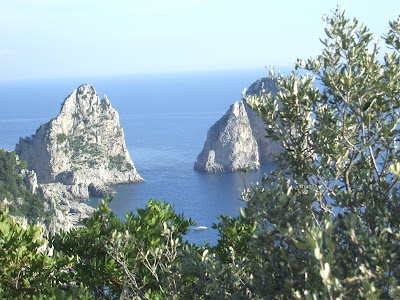 The surrounding gardens were beautiful and tranquil, and we just relaxed on this beautiful bench for a while enjoying the beauty of the garden and the day…………. 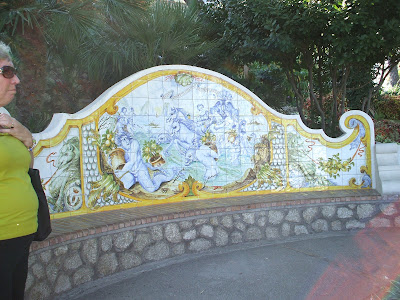 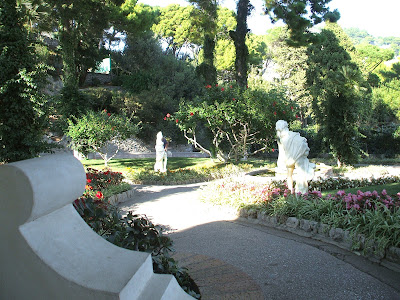 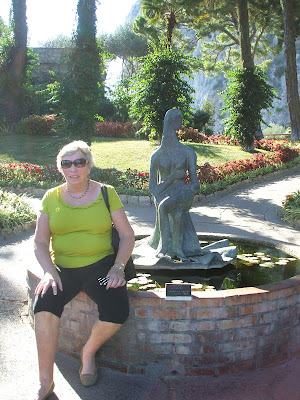 Then we walked back uphill (there’s no end to uphill in Italia) and caught the funiculare back down to the harbor to wait for a ferry back to Sorrento.  In a garden above the harbor back in Sorrento, I saw this beautiful tree--Grace called it a tulip tree--which I thought was especially unique and beautiful. 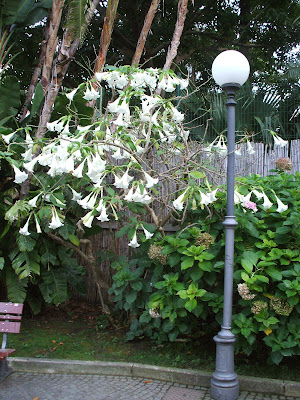