OFF THE TOURIST TRACK

This weekend I went to meet one of my other Italian penpals, Antonio and his donna, Antoinetta. 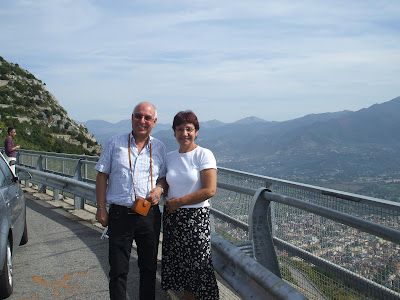 Antonio lives in a small town near Cassino, and some of you history buffs might think of the battle of Montecassino in WWII, when the Allied Forces destroyed a monastery that was founded by St. Benedict, as well as the town of Cassino.

I took the local train to Naples and then a regional train to Cassino.  When I debarked the local train, there was a checkpoint where you had to show your ticket from the local train in order to enter the central train station.   The station employee who looked at my ticket wanted to fine me 41 euro because my ticket wasn’t date stamped.  I had put my ticket through a machine at the Sorrento station, and I hadn’t seen any other ticket validation equipment on the train, so I assumed I had done what I was supposed to do.....maybe the equipment had malfunctioned.  This station employee was pretty nasty and just kept asking me for my passport and 41 euro.  (I had only paid 4 euro for this disputed ticket.)  So, I just said, NO, I’m not paying the fine.  We went back and forth for a few minutes, and finally, he took my ticket, wrote the date on it, and let me pass through.  I must admit I was pretty nervous because I didn’t have my passport with me.  Everyone had warned me about thefts of handbags, jewelry and baggage in Naples, especially around the train station, so I consciously decided I wouldn’t take my passport.  But all ended well.

Cassino is still a fairly small city, but the towns where I spent my weekend were even smaller.  Antonio is retired from his job as a teacher of languages—French and English were his specialities, so I was able to have “real conversation” in English, as well as practice my Italian and learn even more from him.  Antoinetta lived in the States for a few months because her family emigrated to Cleveland, so she spoke excellent English as well.  Antonio is the “host extraordinare”.  He is an extremely intelligent, creative, and generous person who is living a very active retirement.  He and Antoinetta are both crazy about dancing—they met at a dancing school and partnered up about a year ago.  They dance three or four times a week, and Antonio also swims, paints, does pottery, and is starting an archery class next month.  He lives in a lovely house that started as two rooms, and over the years, expanded to 12 rooms on three levels.  The original house (two rooms) was where his deceased wife’s grandfather lived.  In Italy it is very common for families to pass on property to their offspring and for generations after to continue living in the same home.  The family home is very important to Italians.

Both Friday and Saturday night, I accompanied Antonio and Antoinetta to town squares where there was line dancing.  Saturday night, we had dinner at a place where there was live entertainment and people were doing line dancing and ballroom dancing.  Antonio would rather dance than eat!  I danced one dance with him—a simple cha cha—partly because of my sore knee and partly because you must know the steps!  I was amazed at how many people were dancing, from young teens to old folks (like in their eighties old), and what obvious enjoyment was evident in the faces of the participants.  In the town squares, there were from 20 to 40 people dancing at any given time, and it was clearly the center of entertainment for the locals.  It was dark, so my pictures aren’t great, but they’ll give you an idea of the setting. 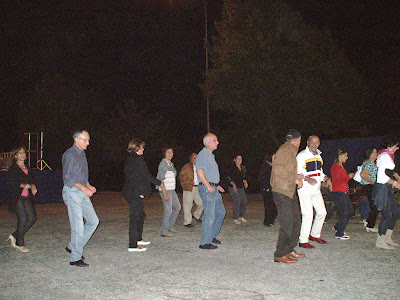 On Friday night, we went to a small town where there was some kind of religious celebration connected to the dancing event, and the streets were decorated with these beautiful lighted arches. 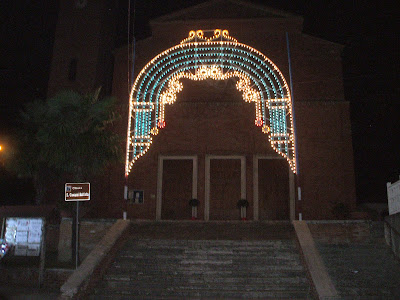 On Saturday evening, we went to a different small town, where there were similar decorations....... 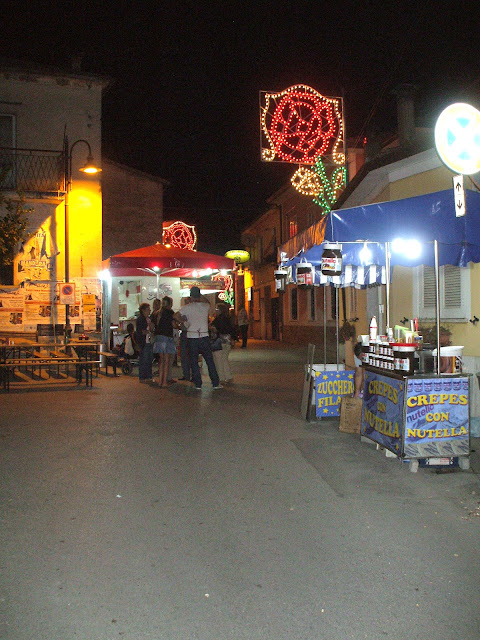 as well as a number of street vendors selling peanuts…. 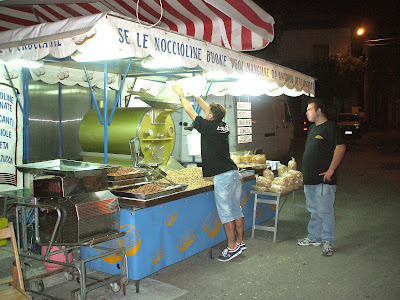 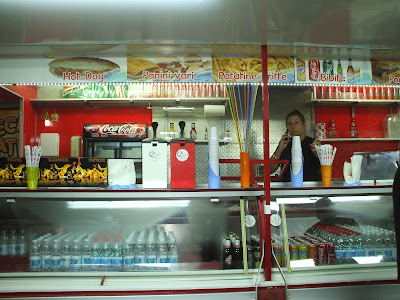 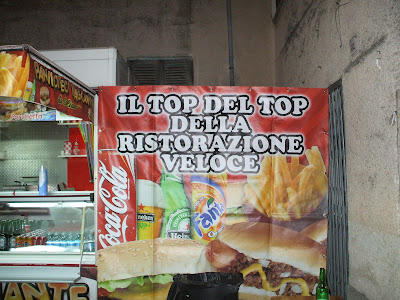 Translation:  The best of the best of fast food restaurants

Another highlight of the weekend was a trip to see the rebuilt monastery, and, unfortunately there is no a photograph can convey the beauty and serenity of this place. 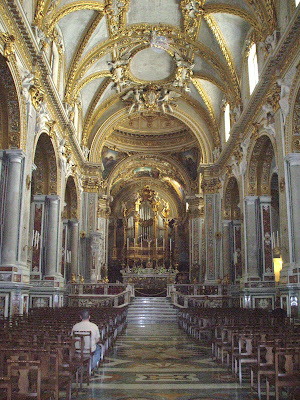 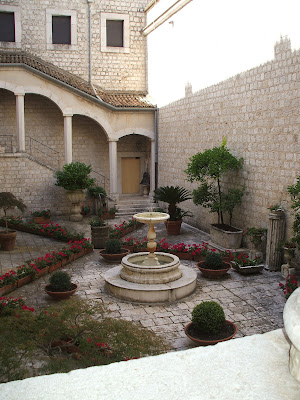 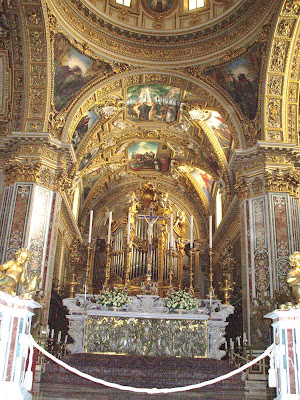 In some ways it is a replica of the one that was bombed, but there are some modern aspects also.  We went through the museum quickly, but there are many artifacts going as far back as the second and third century, and their art gallery boasts one Botecelli.

I was absolutely delighted to spend this time in a “normal” Italian town, away from the tourist culture of Sorrento.  I could not have had more gracious hosts than Antonio and Antoinetta, who both went out of their way to make my stay comfortable and enjoyable.  (Note to my niece Shelley—I now have four Italian angels.) 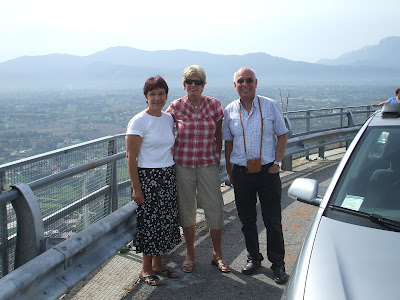 Side notes:  Prices in restaurants were about half compared to Sorrento for the same dishes. And…I had an opportunity to eat Chinese food, Italian style.  So far, I've seen only two ethnic restaurants.