Did I mention that I haven’t watched TV in three weeks?  I thought I would miss it more than I do.  Of course, I would be lucky to find a program in English.  When I first arrived and was staying at a hotel, I was able to get one English program on their TV.

There are 2 TV’s in my apartment, but I can’t get either of them to work.  I’m not sure why, and I haven’t asked.  I’ve been reading a lot, and I usually have some homework to do at night, plus I’m living in a place where life on the streets is quite entertaining.

First, there are the musicians that entertain the diners in the many restaurants in the marina.  The fellow sings at one of the nicer restaurants is really quite good.  The water acts as the speaker system, magnifying every word of the songs he croons.  Some are ala Andrea Bocelli, some are ala Dean Martin.  Then there is a father/son act (I think).  The father plays the accordion, and the son accompanies him on a big hand drum.  They wander from restaurant to restaurant, and after they play two or three songs, the son circulates around the tables to take up a grateful collection.  This is a picture of them I took from my balcony. 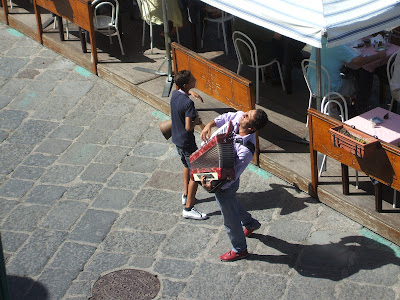 The father becomes quite animated—really gets into la musica.  Last Sunday, they had a third in their combo.  Maybe it was the grandfather—he played a very sour sounding sax, and I think people must have paid them to go away.  I was about to go down to the street and offer them 20 euro just to stop, but I didn’t want to hurt the old guy’s feelings. 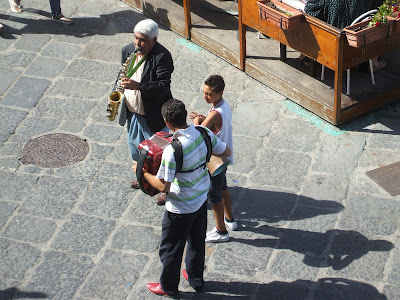 And then there are the fireworks.  I’m never sure whether they’re connected to some sort of celebration, or if people here just like them.  But there are fireworks displays here two or three times a week. 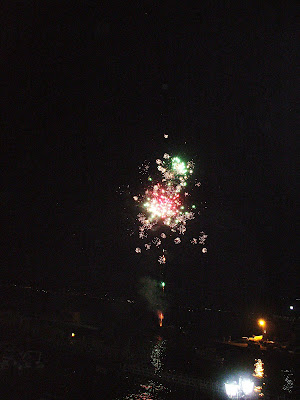 This last Sunday, I was resting my injured knee (a story for another blog entry) and reading, when the church bells next door went crazy ringing, ringing, ringing.  Mind you, I’m used to hearing them ring every half hour to announce the hour and hour and a half (e.g. for 8:30 p.m., 8 long loud rings, and a couple of short dings to signify the passing of 2 quarter hours).  Then at quarter after, one short ding, and at quarter to the hour, 3 short dings.  But this was like the bells went ringing mad.  Then I thought I heard a choir singing.  A bit later, I was sure I heard a band playing, so I limped out to the balcony to see what all the fuss was about.  There was a long procession making its way along the marina road, led by a group of priests carrying a large banner, followed by a bunch of regular folk.  Then came a priest, maybe a bishop , wearing gold embroidered vestments and swinging that incense burning thingie, and he was followed by some men who were carrying a large statue of some female saint on a platform which was decorated with lots of beautiful flowers.  Behind them was another group of priests carrying a red canopy, and then another gaggle of regular folk.

They passed from one end of the marina to the other and then disappeared.  I thought they were going up the steps, but I didn’t see them ascending.  Then the fireworks started, and it was quite a grand display.  When the smoke cleared, I saw the procession coming down the steps (and have no idea how they got in that position) and they proceeded into the church, with the band playing, and then the bells went crazy again.  And after lots more clanging came lots more fireworks.  It was a cacophony.

It was dark, so my pictures didn’t turn out so well, but here's one where you can see the saint who was being honored. 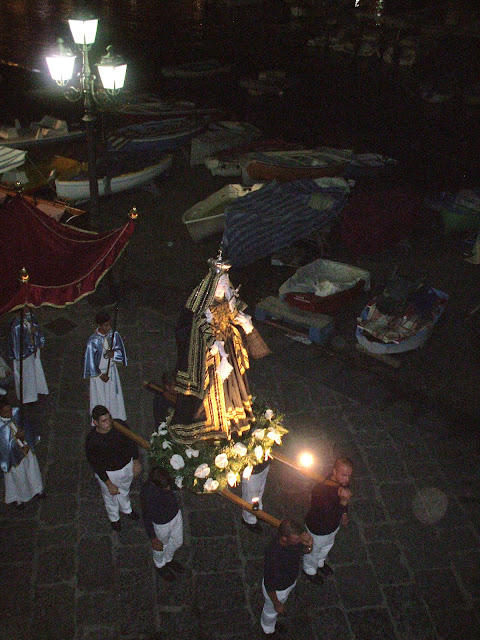 And any old day, there are a myriad of tourists wandering about the marina.  They mostly come to eat, but some come to lay in the sun and swim.  I hear conversations in a multitude of languages.  A lot of Germans and Austrian vacation here, and there are always some Asians around, too.
The noise doesn’t stop until around midnight here, and I’ve conditioned myself to sleep through it when I need to, but mostly I’m up late and usually hear the last bell ringing at midnight.  Unfortunately, I also usually hear the 5 a.m. bells.  But seriously, who would give up my view and all this entertainment just to get a little sleep?
Posted by Unknown at 11:56 AM