I walk to the language school, which located at the top of those cliffs that define my little cove.  Here are some highlights of my walk.  I don't know how well you can see them, but there are some feral cats playing in the fishing nets that cover "who knows what".  These cats abound in this little fishing village. 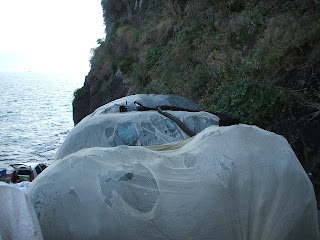 There are 61 stops from the beach level to the top of the cliff.  As you can see from these pictures, there's quite an incline, and along the way, there are a couple of spots where you can catch your breath and pray to the Virgin Mary that you make it to the top! 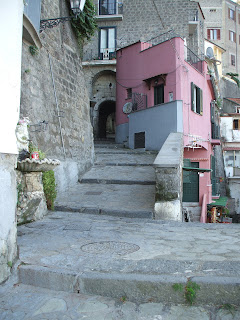 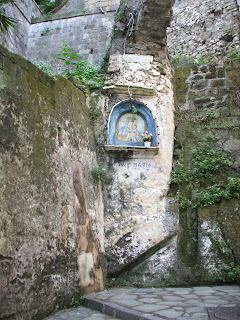 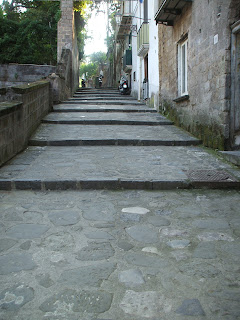 I’ve attended five 4-hour language classes, and talk about being lost.  The classes are taught completely in Italian, and we aren’t supposed to speak English at all (but we do a bit).  When we ask, “Cosa significa (Italian word/phrase)?”,  the instructor usually does a bit of pantomime herself to try to avoid giving us the English word.  That doesn’t work all the time.  There are only 3 other people in my class—a woman from England, another from Quebec, and a young man from Austria.  They are all here for only two weeks, so I’ll be meeting new classmates often.  Here's a picture of my first group of classmates. 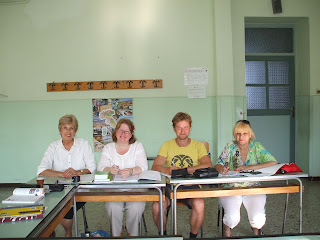 All the teachers and administrators are quite young, and they dress very casually.  I was surprised that the instructors wear jeans most of the time.  Here's Nuncia, who I like very much. 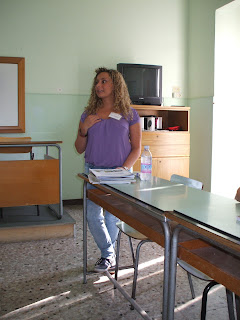 I’m developing a bit of an ear for the language and can pick up parts of conversations….or so I thought until I tried talking to the plumber who came to fix a leaky toilet, increase the water pressure to more than a dribble, show me how to adjust the water temperature and how to run the mini size washing machine.  He was very patient when I finally turned to the language translator on my Kindle Fire and asked him to type in what he was trying to tell me.  The other three people in my class are more advanced than I am, but I’m hanging in there.  I can put sentences together better than I can understand what others are saying.

The acoustics in the classrooms at the school are really poor—very high ceilings and no carpet, so there’s an echo when you speak loud.  I have trouble distinguishing what the instructor is saying when she speaks loudly.  When I ask, she willing tones it down, and then I do much better.  I love the instructor who leads our conversation class, but am a bit intimidated by the one who teaches us grammar.  We had a substitute teacher for that part for the last couple of days, and I much preferred her.   From what I can gather, we can expect instructors to rotate in and out.

A woman I met at a meet-up group in Ann Arbor (for those of you who know her, it’s Janice Pearson) and her mother have been in Sorrento for a few days on their Italian tour.  We’ve had dinner twice and I think we’ve run into each other on the streets 4 times in the last five days.  Sorrento is a small town, but even so, I thought this was pretty extraordinary and so did they.  Old Sorrento is a charming place, with narrow streets lined with a bazillion shops.  There are several piazzas in Sorrento.  Here are a couple of shots from the largest one, where you can hire a carriage for an old-fashioned tour around the city. 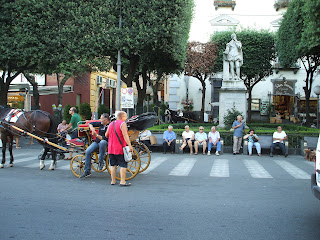 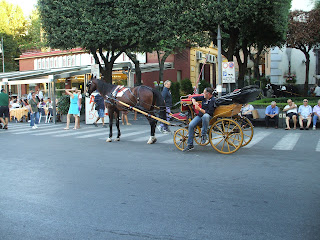 It amazes me that people on Vespas are allowed to drive on the narrow streets of old Sorrento.  You see people from 16 to 76 zipping around on these little motorcycles, and they don't seem to follow any particular traffic rules.  You have to be alert at all times.  I’ve seen no stop lights here.  There are pedestrian crossings at intervals, but I’m told you need to be very sure that a driver will actually stop before you put a toe out.  The graveyard is apparently populated with people who assumed that the traffic would stop for them!  The streets in the old town are made of large stones, and sidewalks of small bricks, and walking can be hazardous when you’re on the part where there are large stones (like on the steps above).  It would be easy to turn your ankle.

In the marina where I live, there is a bell tower that marks the time on the quarter hour (most of the time).  There are people outside socializing with each other and children playing until late in the evening, and one of the restaurants has live entertainment on Thursday evenings.  (Volare, oh, oh.)  So it’s very noisy at night.  Today a feral kitten decided to camp on the landing outside my apartment, and it is meowing constantly.  I didn’t have anything to feed to it, and I couldn’t get it to come close to me, but tomorrow I’ll look for some cat food if it's still around.  It may be hungry. There’s also a baby in the apartment above me that doesn’t like to go to sleep and protests by wailing for a half hour or so most nights….not very good sound proofing here.  I was happy to learn that Italians recycle paper, plastics, and glass, but not so delighted when the recycle truck picked up a collection of glass bottles right below my apartment at 1:30 a.m. this morning.  I think living in downtown Ann Arbor for the summer was good conditioning for me—I got used to noise.

The married couple who have been my penpals for several months will be coming to Sorrento this weekend to meet me.  I’m just delighted that they’re going to extend themselves in this way.  They don't speak English, so I'll get lots of practice in conversational Italian, including, I'm sure, the gestures that enhance Italian communication.