I'm in love with an island.  Mind you--I've been in love with islands before.  I'm a bit fickle about islands.  But I think Ischia is the most beautiful island I've seen (that I can remember, anyway).

It lies at the north end of the Gulf of Naples and it's a volcanic island that was originally settled by the Greeks sometime in the 8th century BC.  In its early days, it was a trade center.  Over the centuries, various warring Italian states claimed ownership, and it was common for pirates to hole up in the mountain caves of the island throughout the 15th century.

Ischia's population is around 60,000, and these days, it primary industry is tourism.  It's knows for its thermal spas, which are frequented most by Germans and Asians.  Cleopatra with Elizabeth Taylor was filmed on this island.

I went to the island with classmates Isabelle (from Switzerland), and Kathy and Michelle (from New Zealand).  It took an hour by ferry to get there from Sorrento.  We were approached immediately by Philipo, otherwise known as Pippo, a native of Ischia who spoke English quite well.  He made us an offer that was too good to refuse--a tour of the island in his white Mercedes for only 120 euro.  We decided fairly quickly that this was preferable to jamming ourselves into a bus with other tourists and fumbling our way around this fairly large island (17 square miles).

The charming Philipo and his very clean Mercedes: 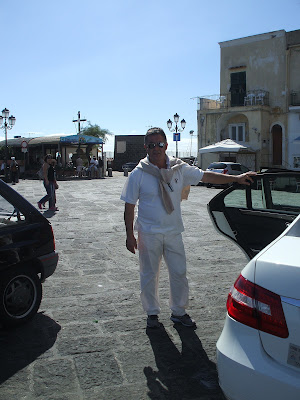 Isabelle is a very good photographer and her pictures might better capture the incredible beauty of this lush, tropical island.  Sometimes you just have to be there!  I'll post some of her photos when I receive them.  Our first stop was the famous Castello Argonese, which was built on a rock near the island in 474 BC by Hiero I of Syracuse. 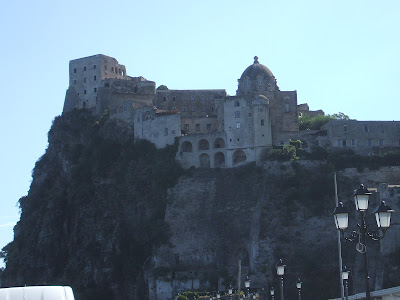 We proceeded on a tour around the islands, with stops at various scenic points that offered great Kodak moments: 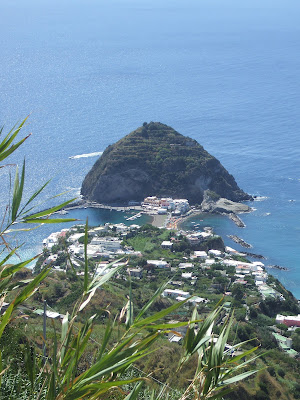 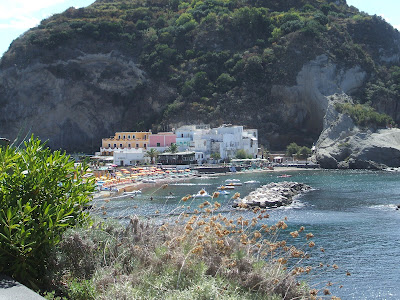 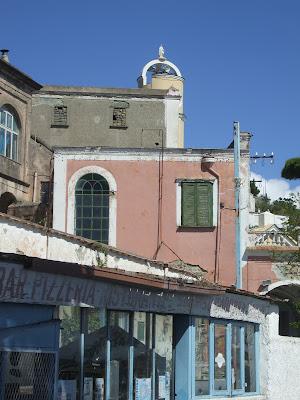 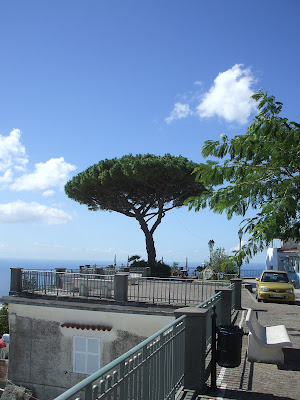 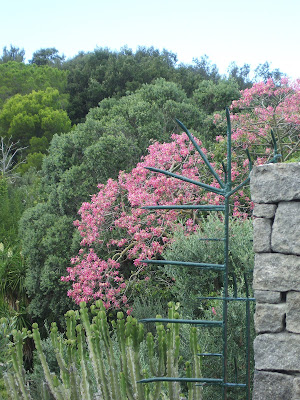 This last photo gives you some idea of the lushness of the island.  It was once called "The Green Island", and, wherever you go, there is a luxury of trees and flowering bushes.

Even the signage on the island is more beautiful than elsewhere.  There are painted ceramics signs like this one that designate shops and shows maps of various destinations.  This one is a map of the island. 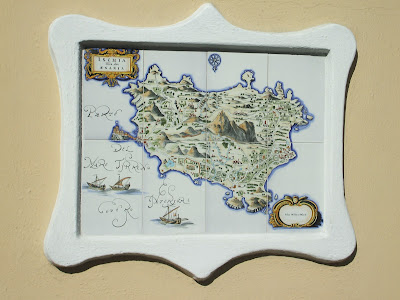 Here's an odd formation we saw along the way called Il Fungo (the mushroom): 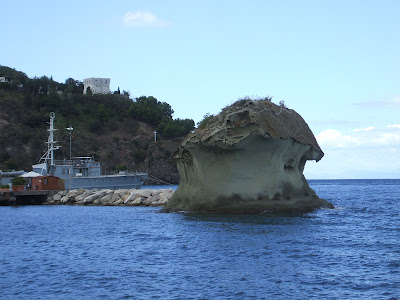 After a 4 hour tour of the island with Philipo entertaining us with his great humor, teaching us new Italian words, and touting the many positive attributes of the island (he should work for the Tourist Bureau), he dropped us off at a restaurant with a beautiful sea view, where we had a lunch.  The parting photo beside the restaurant (Kathy and I bought floppy hats along the way): 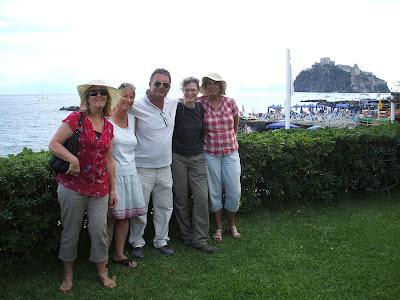 Then we browsed the shops on our meander back to the harbor to catch the ferry back to Sorrento.  What was most wonderful about Ischia was that there were hardly any tourists there!  We were most surprised, especially Michelle and Kathy, who had also been to Capri where the streets are as jammed with tourists as Sorrento is.  And, in their opinion, Ischia is more beautiful than Capri.  (Yes, I know we're tourists, too, but we do get sick of the crowds of ourselves here.)

I fell in love with Ischia, and I plan to return to tour the castle, as well as some beautiful gardens there.....maybe when my friend, Grace, comes to visit me in October after her Mediterranean cruise.
Posted by Unknown at 1:59 AM