THE TRUFFLES OF TODI

Bernadette likes it so much here that she decided to skip language school and stay another day.  Our adventure for Monday was to take the bus to Todi, a town of about 17,000, built on two hills (of course).  It’s another walled city, and part of the one built in pre-Roman days still exists.  The most recent wall was built in 1244 and is mostly intact.  Archeologically, Todi’s origins date back to the fifth century B.C. and, like every town and city in Italy, it has been ruled by several different regimes over the many centuries since.

There are no escalators or elevators to be found in Todi, so there was a lot of climbing up hills on this day. 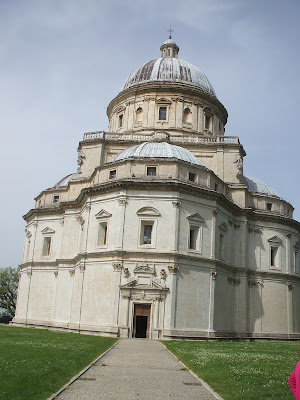 Across from the bus stop was this incredible Church of St. Mary of Consolation, which was constructed over one century, beginning in 1508.  The interior is in the form of a Greek Cross. 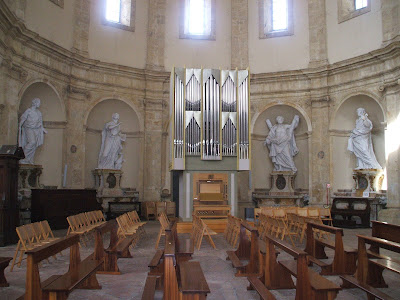 There were three polygonal apses and a semicircular one. 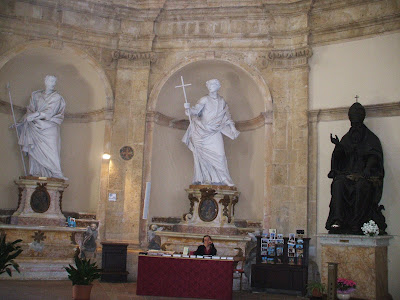 There was wonderful statuary in each. 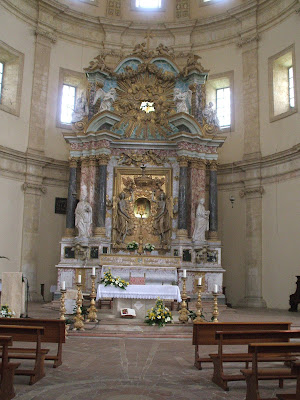 And a beautiful altar, of course.

Bernadette and I waited for a bus to take us up to the city center, but after 15 minutes, we decided we would try to walk up, having no idea how far "up" was.  I could do some whining about this ascent, especially about how I felt when a bus passed us by at about the halfway point, but  I'll spare you my misery. 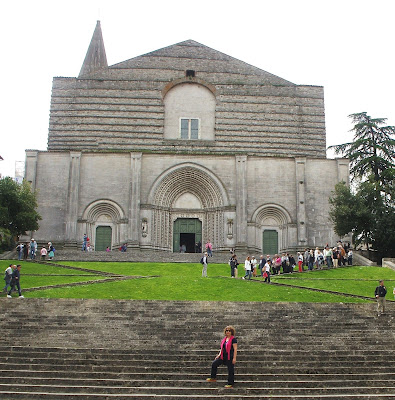 We passed by this impressive Church of St. Fortune on our way "up".  (I did not add these steps to my climb.) 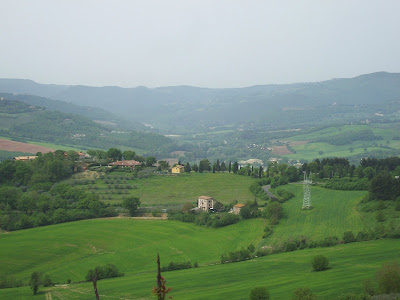 And we enjoyed some beautiful views of the countryside during my frequent pauses.

We finally reached the top of "up" and shortly entered the Piazza Grande, where the grandest of Todi’s buildings dominate the scene. 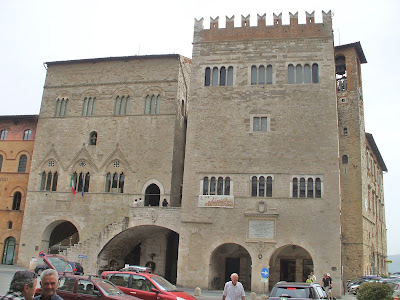 There was the Palace of the People, which dates back to 1218 and is connected by a large staircase to the Mayor’s Palace. 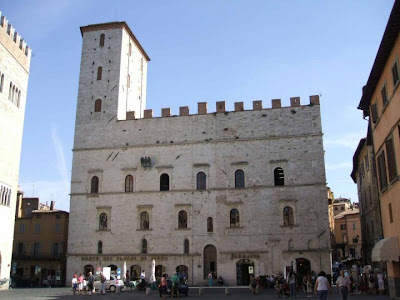 The Palace of the Priors, built in the first half of the 1300’s is similar in architecture. 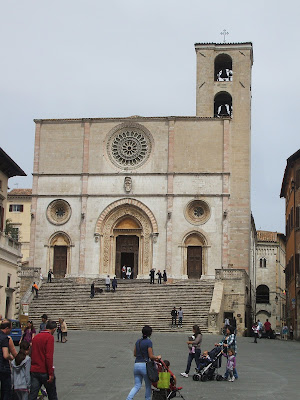 On the opposite side of the piazza is the Cathedral of the Assumption of Mary.


There was a craft show in the Palace of the People, and we looked at some beautiful woodworks, embroidery, and ceramics, and I almost bought a beautiful cashmere sweater for 200 euro.  Fortunately, I came to my senses, because what I don’t need are more clothes to add weight to my luggage!  I’m glad I didn’t have my ATM card with me, because I was very tempted.  Todi is an area with a plentiful supply of truffles, and we saw several shops selling "truffled" products.

We found an archeological museum, but didn’t go inside, because it was just a lovely day to be wandering the streets outside, which is exactly what we did.  After a couple of hours, I was famished, and we had lunch at a restaurant that had been recommended to us by a man at the train station in Perugia.  He was from Todi originally, and he had played soccer with the owner of this restaurant.  His nickname with the team was “the bomber”, because he scored a lot of goals. 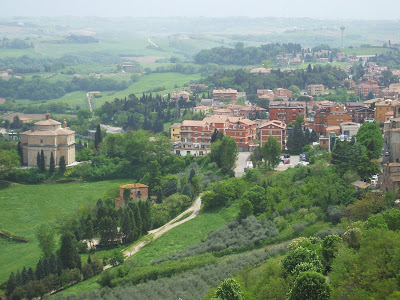 Unfortunately, the owner didn’t remember “the bomber”, but we had a lovely lunch on the patio overlooking the surrounding countryside.

I was very tempted by the gnocchi in cream and truffle sauce, but I’ve been wanting to try a dish with boar, and there was a stew on the menu that looked good.  It was. 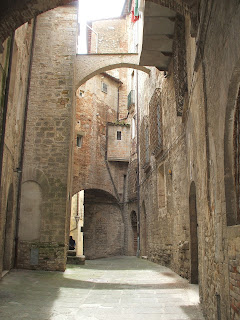 There isn’t a lot to see in Todi.  We wandered through the side streets for another hour or so after lunch, enjoying the charm of the narrow streets and arched passageways.

We caught a bus to the train station at mid-afternoon and headed back to Perugia, arriving in time for Bernadette to pick up her bag at the apartment and take another bus to a different train station for her return trip to Florence.

It was really wonderful to have Bernadette’s company for my first weekend here.  I don’t know how I’m going to find my way around without her as my excellent navigator.  I imagine I’ll get lost a few times, but I’m very motivated to find those escalators and elevators again!
Posted by Unknown at 12:00 PM