JACK AND JANICE AND COLIN AND MARGIE, AND ME

When you travel alone, you can spend a lot of time that way unless you exercise some social initiative.  Months before I left for Italy last fall, I had established penpal relationships with four people here.  So far, I’ve met three of them, and next month in Liguria I’ll met the fourth.  When I decided to go to Southeast Asia, I joined a website called internations.org, and that’s how I met the two fabulous women in Thailand who traveled a bit with me and who I now call my friends.   And, of course, I made a few more wonderful friends at the language schools I attended.  Generally, when I’m out and about sightseeing on my own, I look for opportunities to initiate conversations with people.  Sometimes we talk for just a few minutes, sometimes it’s for the length of a bus or train ride, and sometimes it’s for a few hours of sightseeing together.

That’s what happened when I met Jack and Janice from Pennsylvania in Spello a couple of days ago.  I heard American voices, and I initiated a conversation with them.   You can easily determine if people want to engage or if they don’t.  You either get a polite, but brief response or a warm welcome to connect.  I was lucky that Jack and Janice were "connectors", because I really enjoyed the couple of hours we spent knocking around Spello together. 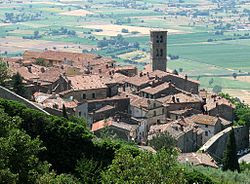 Today I went to Cortona by train.  Cortona was made famous by Frances Keyes of Under the Tuscan Sun fame.  As I coursed my way up to the town on the bus, I could immediately see why she fell in love with this town. 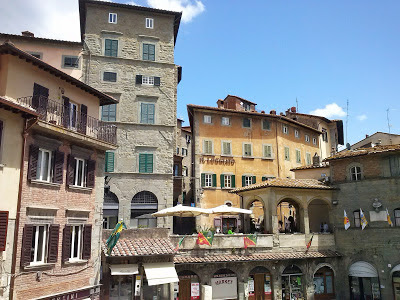 It was after 1 p.m. when I arrived, and I was hungry, so I found a little trattoria in the first piazza I entered after a bit of an uphill trek.  And I remembered this time to take pictures, because the lunch was extraordinary.  It occurred to me that I was going to be leaving truffle country shortly, so I better have some. 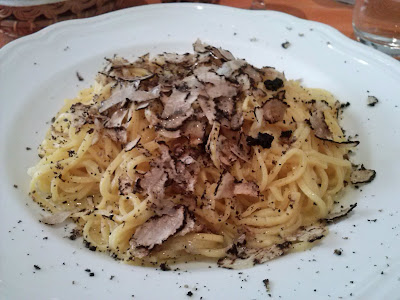 So I ordered this fantastic pasta with shaved fresh truffles….I was in truffle heaven. 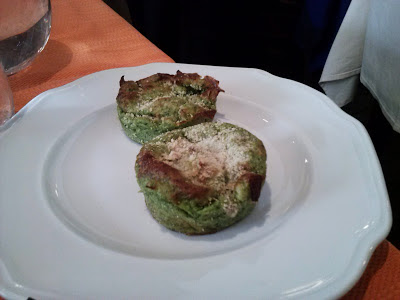 As a side I ordered Sformata di Verdure—a vegetable soufflé—and it was creamy and luscious, even though I wasn’t sure what made it green.

After lunch, I went out to the piazza and decided to investigate this huge building that bordered one side. 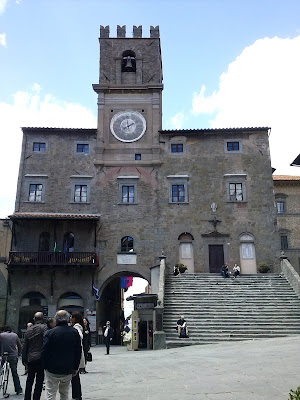 I wasn’t sure whether it was a church or a government building.  Both often have bell towers.  Sitting at the top of the steps was a couple (the pair sitting in the middle), eating a takeout lunch, and they were speaking English, but not the American variety.  I made some comment to them about the nice perch they had selected, and off we went into conversation.  Not long into our chat, they mentioned having met a couple from Philadelphia the prior evening at a restaurant in Assisi, where they were staying.  When they mentioned that the woman they met was quite a shuttlebug, I asked if, by chance, her name was Janice.  What a really amazing coincidence.  They were sitting at a table next to the same Jack and Janice I met and spent time with in Spello two days before, and they had as pleasant an interchange with them as I had enjoyed.  Sometimes this world is really wondrous!

This couple, Colin and Margie, are from South Africa.  They hadn’t yet started their sightseeing, and neither had I.  When they invited me to join them, I, of course, agreed.  (Jack and Janice, if you are reading this, I’m sure your jaws have dropped!)

Okay, back to sightseeing in Cortona.  Both Margie and I wanted to see Bramasole, the villa where Under the Tuscan Sun was actually shot, not the villa Frances Keyes renovated.   I would say that Margie was more determined than I to find it.  Colin was very supportive—he had also enjoyed the movie.  We set out to find a tourist information office, so we could find out where it was.  We weren't very far along when Margie disappeared into this art gallery where we saw some wonderful bronze sculpture. 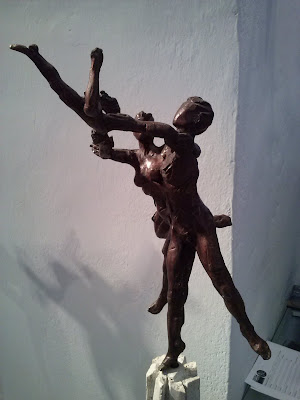 One recurring theme was the passing along of knowledge from parents to children... 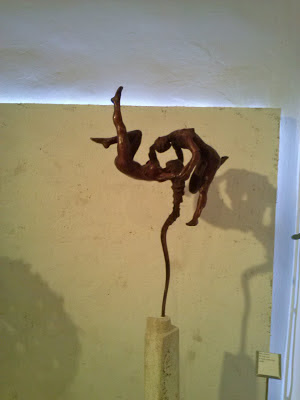 And another was love, in its various forms.  The artist was in the shop, and we had a wonderful conversation with him about his technique for creating these amazing sculptures.  I would love to own one.

We had to wait a bit for the tourist office to reopen after its long lunch hour (or 3), so we found a café that had free Wifi in the meantime and tried to google an address for Bramasole.  We found lots of confusing directions, but after Colin came back from the Infopoint office, we had a general idea where it was.  So we set off in that general direction, stopping a cathedral along the way. 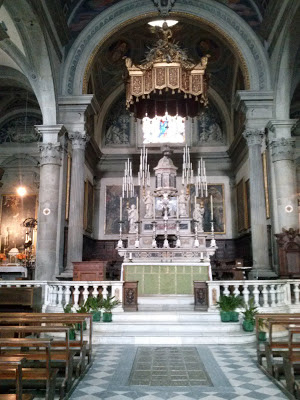 Cortona doesn’t have many sights to see, other than churches.  It’s a town of about 23,000 people and I think there are about 20 churches there. But it’s a wonderful town to roam about.  We walked up hills and down hills, but we weren’t successful in finding Bramasole.  Colin decided we would try to find it by car—they had a Garmin, so we put in the name of a church that was nearest to Bramasole and drove toward it.  When we thought we were relatively near this church, Colin parked the car and we started out on foot.  An Italian man was parking his car in front of us, and Colin asked him for directions to Bramasole.  He told us it was about a 20 minute walk, but only 5 minutes by car.  Colin offered to pay him to lead us there in his car, and this kind man agreed but wouldn’t accept any money.   And we finally found it! 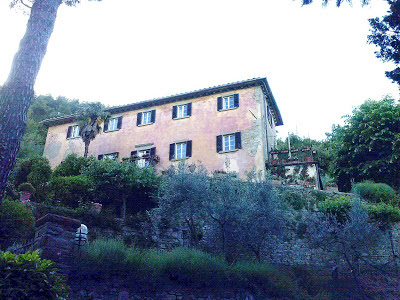 This is the villa.  It was perched above a quiet country road east of Cortona, and the views out over the surrounding valley were fantastic. 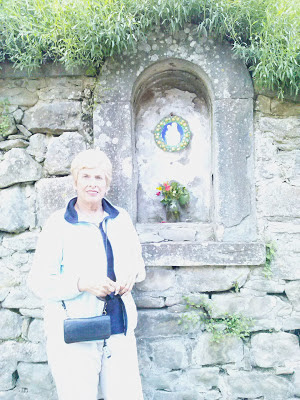 This is a very bad picture of the niche in the stone wall where that elderly man in the movie left flowers in memory of his departed wife.  Margie took this picture of me with my cell phone, which was acting up.  If we ever make contact, I’ll replace this one with the one she took with her camera.


Cortona is a charming city, and, as with all these charming hill cities, the views from any spot are spectacular. 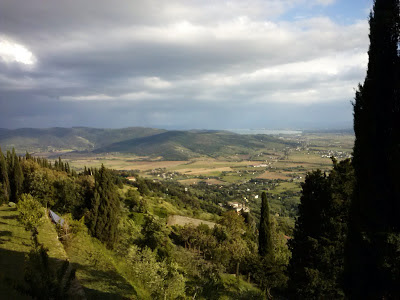 You can see Lake Trasimeno from Cortona…it’s off in the distance in this picture.  It’s a huge lake, almost as large as Lake Como.  I might go there this weekend for a boat ride on the lake if it’s warm enough. 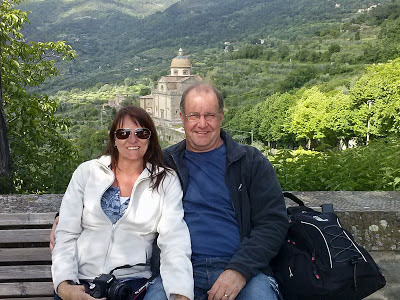 This is a really great picture of Colin and Margie, with one of those 20 churches in the background. 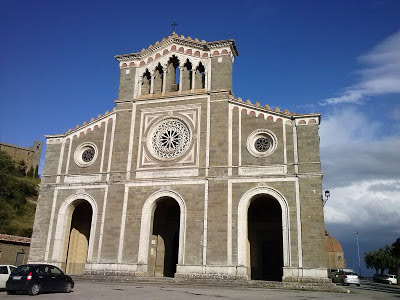 After we found Bramasole, we went to check out this huge church that was nearby.  There was a service in progress, so we didn’t go in.

Colin and Margie gave me a ride to the train station, and I think they were going to stop at Lake Trasimeno on their way back to Assisi.  It was a really delightful afternoon, and I’m so happy that I’m not shy.
Posted by Unknown at 2:17 AM

Such a wonderful post - Colin and Margie are my parents : ) Safe Travels!