I had a number of errands to do today—buy groceries, go to Vodaphone to see why my Internet key doesn’t work, find a language school, go to the pharmacy, etc. etc. etc.  It was a beautiful day in the neighborhood, and my first stop was a café I found that has free Wifi.  I wanted to relax, have a cup of cappuchino, make a grocery list, check my email, and catch up with my several games on Words with Friends.  My next stop was the grocery store, which was closed.  There were four paper signs taped inside the door indicating that the store would be closed today—not sure why one wouldn’t have been enough—but I couldn’t figure out why.

I continued on to try to find the Vodaphone store. 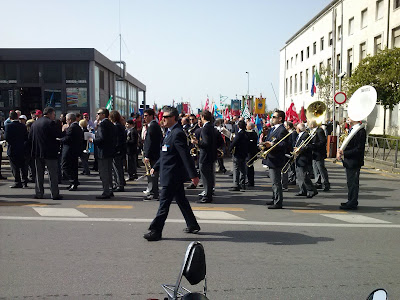 When I got to the bottom of the hill, there was a crowd gathering by the bus station.  There was a band playing.

There were lots of people with flags.  And there were more people with flags streaming off several buses that were stopped at the curb.  Clearly, this was a celebration of some kind, but I hadn’t heard anything about it.  I haven’t had Internet service since I got here last Saturday, so I’m a little out of the loop.

I couldn’t find the Vodaphone store that was supposed to be in that piazza, so I wandered back to the bus station, tried asking a couple of Italians about the holiday but didn’t understand their answers.  One woman motioned for me to follow the crowd that was streaming upward on the escalators to the city center.  So I did.  (Side note:  I've noticed a lot of people kissing on escalators here....people of all ages...not something I've seen elsewhere....is it just the passionate nature of the Italian people or vacationers amping up the romance?)

Shortly after I arrived at the city center, I heard a couple of women speaking English and stopped them to ask if they knew what was going on. 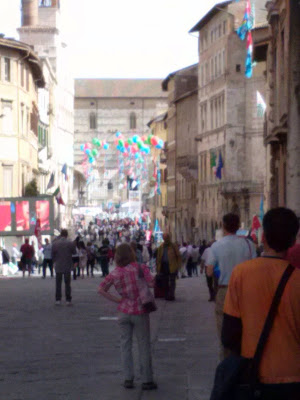 I could see bunches of bright colored balloons lining the street leading to the main piazza and hundreds hanging over the piazza.  I was informed that today is Labor Day in Italy.  I learned that there would be a parade and a lot of speeches. 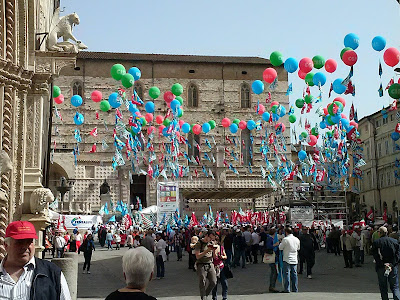 I walked to the main piazza and got some pictures of the balloons.

And of the parade….leading it was the band I saw at the bus station. 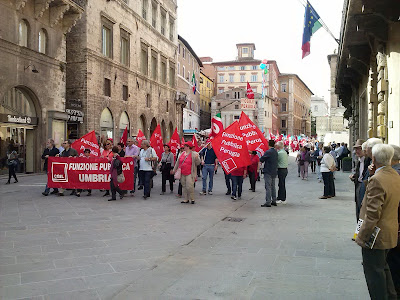 Following them were several groups, representing different unions, each with a unique flag. 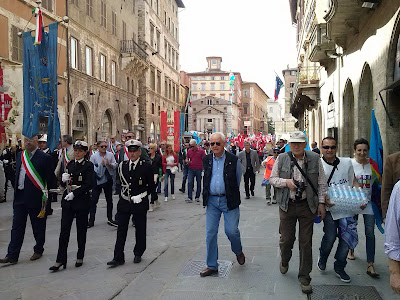 Some groups were in uniform, and there was even a group of pensioners with their own special flag.

On the way back to the down escalators, I found the Vodaphone store…closed, of course, as the majority of the shops and businesses are today.

Clearly, I won’t get any labor done today, and I’ll be eating out!

P.S.  Since I haven't had Internet service for 6 days, I'm catching up on my posts.  I've posted five new entries today while doing my laundry.  YES, I have a washing machine!  YEA!