After almost two weeks of battling that nasty flu, I was ready for some fun.  Connie and I booked a tour of Ha Long Bay during the Tet holiday, since just about all the sights to see in Hanoi are closed this week.  It was a four hour trip on a tour bus from Hanoi to the bay, with about as much leg room as you get in a coach seat on an airplane.  We arrived to board the cruise ship at about noon and started off immediately with a delicious lunch of 8 different dishes. 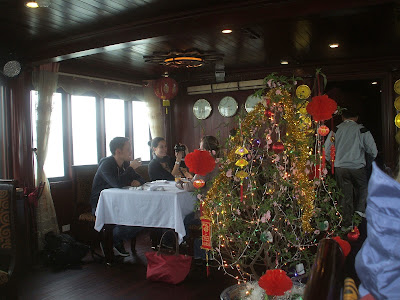 This is the dining room on the boat.

There were about 20 of us on board, and our room was cozy, but comfortable.  We explored the boat after lunch, discovering a great view from the top deck. 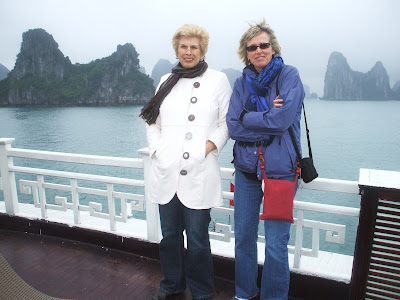 This is me with my friend Connie against the backdrop of beautiful Ha Long Bay. 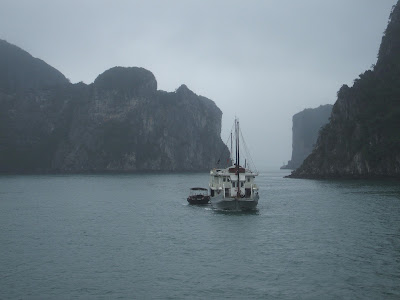 The weather wasn’t great, but the views were still magnificent.

Ha Long means descending dragon in Vietnamese.  According to local legend, when Viet Nam was developing into a country, the people had to fight against Chinese invaders.  To assist the Vietnamese in defending their country, the gods sent a family of dragons as protectors.  The family of dragons began spitting out jewels and jade, which turned into the islands dotting the bay and linked together to form a great wall against the invaders.  Magically, these numerous rock mountains abruptly appeared on the sea, ahead of invader’s ships, which struck the rocks and each other.  After winning the battle, the dragons decided to live in the peaceful and beautiful bay, and the place where the mother dragon descended was named Ha Long.  Ha Long Bay is a Unesco World Heritage site which covers an area of around 1,550 square kilometers and includes around 2,000 islets, mostly limestone, each topped with thick jungle vegetation. 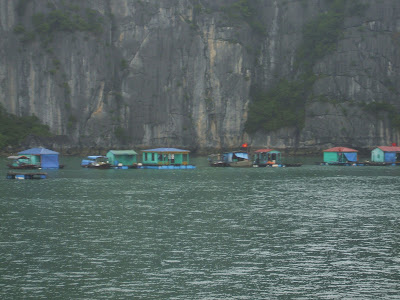 A community of about 1600 people live in four floating fishing villages around the bay, plying the shallow waters for 200 species of fish and 450 different kinds of mollusks.  We passed by this one. 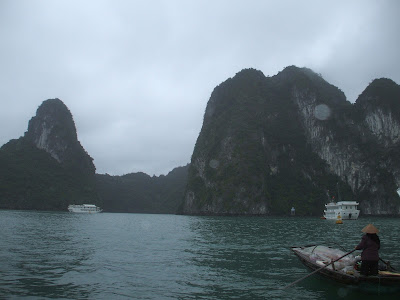 There are islands of all shapes and sizes dotting the bay.  We probably saw about 5% of them. 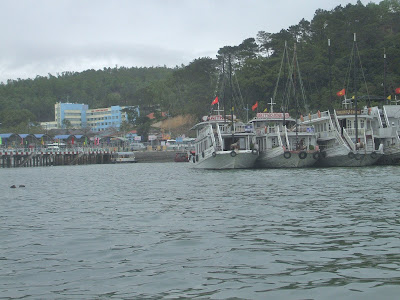 And there were lots of cruise ships, all about the same size as ours, taking small groups on tours around the bay.


One of the highlights of the cruise was a visit to Sun Sot Cave, or Cave of Surprises, named by a French explorer who was amazed when he discovered its three successively larger chambers. 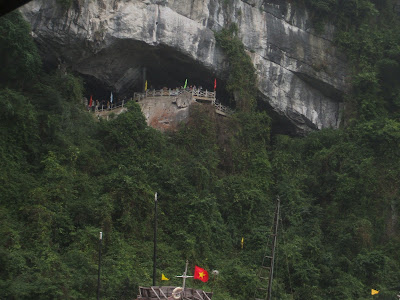 There were about 100 stone steps carved into the side of the mountain ascending up to the cave.  It’s high season, so it was a large crowd of people snaking their way up through the tropical vegetation to the cave entrance. 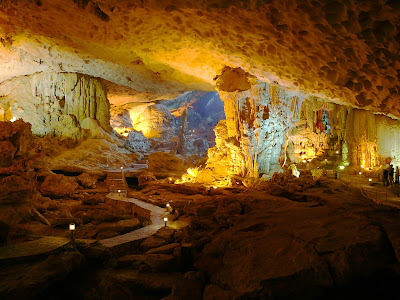 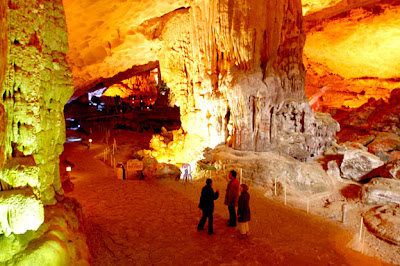 I don’t possess a camera capable of capturing the girth of this cave, so I borrowed these photos from the Internet.


There were walkways and steps going up and down as you navigated your way from one chamber to another. 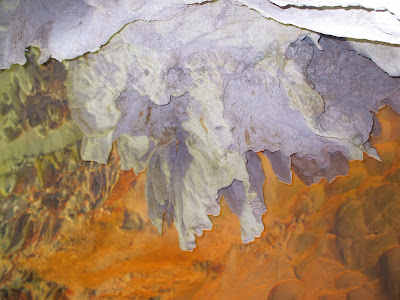 If you use your imagination, and have some help from your guide, you can see a lot of animals and human faces and shapes in the rock formations. 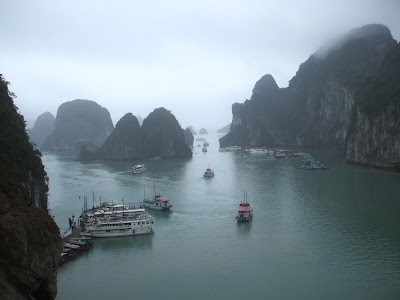 This is the view of the bay from the deck at the exit end of the cave. 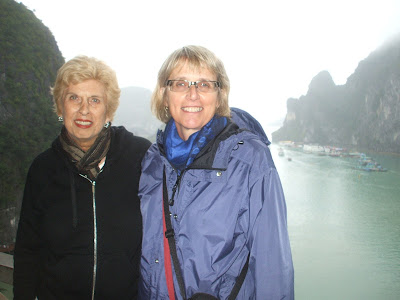 And again, with Connie and I as eye candy.


We didn’t see the sun for three days, but no matter what the weather, this bay is spectacular.  And we continued to be pampered with good food and great service on board.  It was my first cruise, and I loved living on the water for a couple of days and being lulled to sleep by the gentle rocking of the boat. 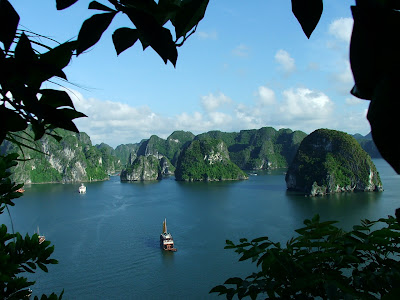 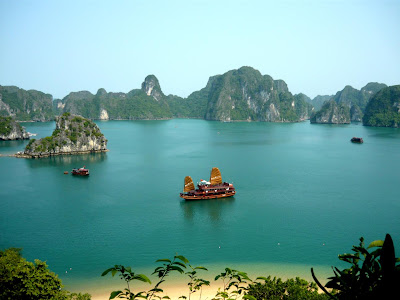 I had wished to see the bay bathed in sunshine at least once, but had to snatch a couple of photos from the Internet to enjoy blue sky views.


Thanks to that family of dragons who rescued the Vietnamese from their enemies and created this beautiful bay!
Posted by Unknown at 8:16 PM

So that is what it looks like when it's sunny! Wow. Pretty stunning. So is the eye candy :)