It seems I've spent more time outside of Hanoi lately than in the city.  I took another tour to a Thai mountain village (ironic, eh?) about 160 kilometers southwest of Hanoi.  It was close to four hours bumping along on Viet Nam roads, the last hour of which was winding up mountain roads to our destination. 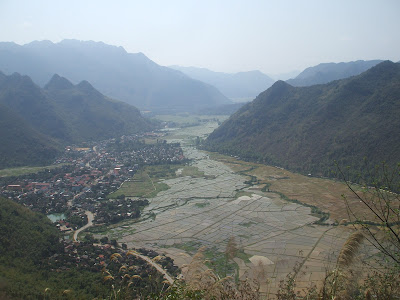 The scenery along the way was beautiful, but you never seem to be able to capture its grandeur with a camera. It was also a bit gray and foggy. 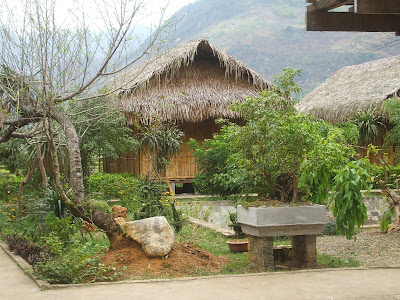 Upon arrival at the village, I checked into my cute little thatched bungalow. 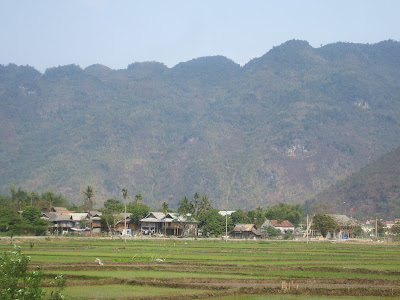 I had a pretty spectacular view from the balcony at the back of the bungalow. 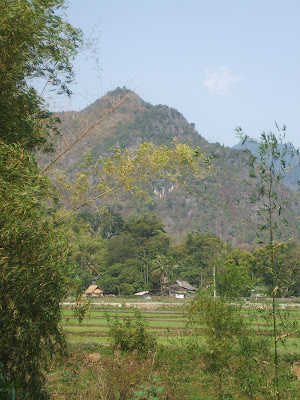 After checking in, we had a delicious lunch, family style, with 6 different Vietnamese dishes. (I had expected Thai cuisine, but the food wasn't spicy at all.) 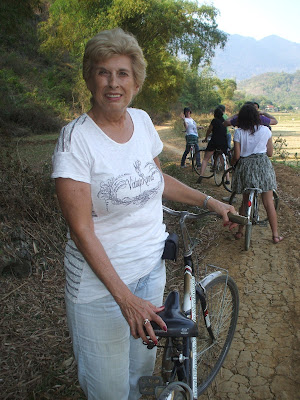 After lunch, we bicycled to the nearby town of Mai Chau.  I was feeling pretty good about not only keeping up with the younger crowd, but leading the pack at times. 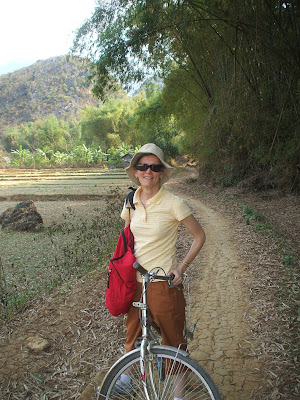 This is one of my Hanoi angels (an Aussie by birth), Narelle.  She wanted to check out this tour so she could give better advice to her travel agency clients. 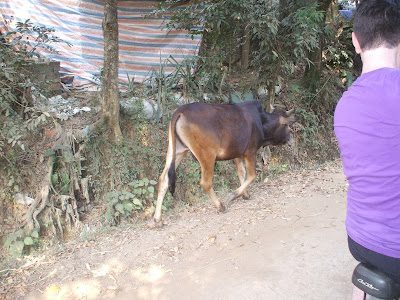 The cattle are free range around here, and we often shared the road with them. 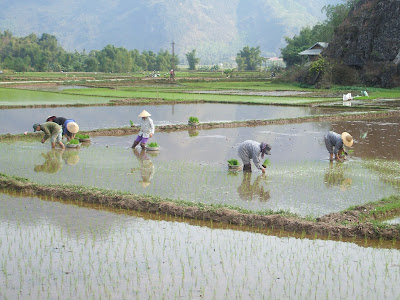 We bicycled on the roads through the rice paddies where the villagers were working their personal paddy.  Each family lives on the rice they grow on their square in these rice fields.  Their income is derived from tourism related businesses. 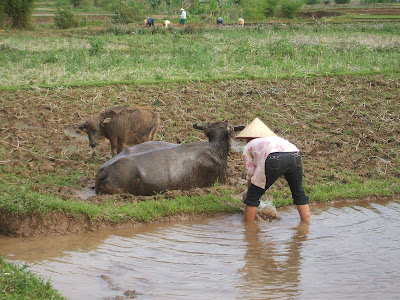 This woman thought her dirty cattle needed a rinsing. 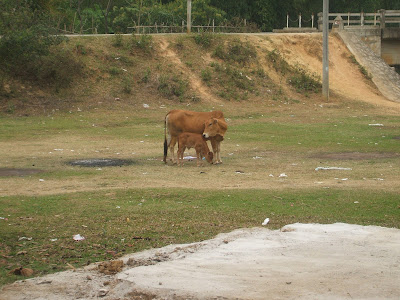 After cooling down a bit, we enjoyed another delicious meal, sampling another several dishes, and then settled in for a really delightful performance of some traditional Thai dances. 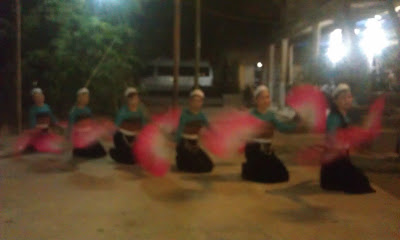 Not ideal photography, but this fan dance was beautiful. 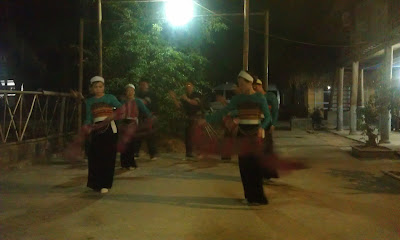 I was serenaded to sleep by geese honking outside my bungalow, and awakened more than once in the night by barking dogs and howling cats.  My early alarm clock was the crowing of multiple roosters.  Ah, the peaceful countryside.

After a breakfast of noodle soup, some of our group went to climb 1,201 steps up a mountain to see a cave.  Narelle and I passed on that insanity and took a walk back through the rice fields to explore the town of Mai Chau. 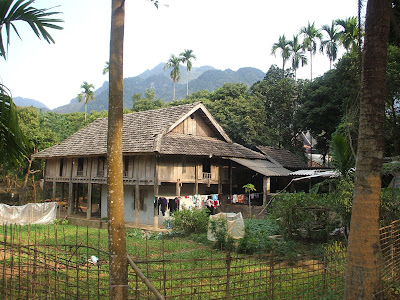 This is a typical house in the Thai village. 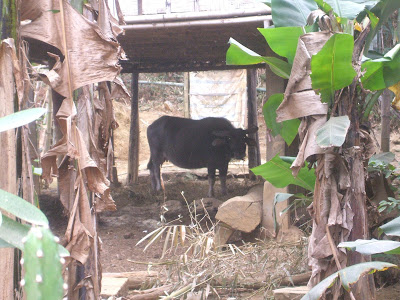 Very few people keep animals below their houses, an unsanitary practice that was once widespread. 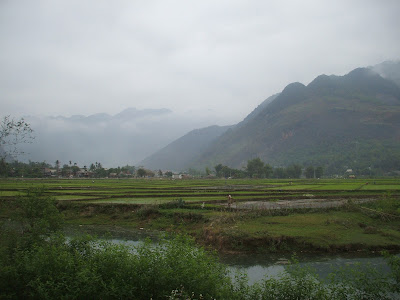 On this morning, the mountains were a different kind of beautiful--draped in clouds. 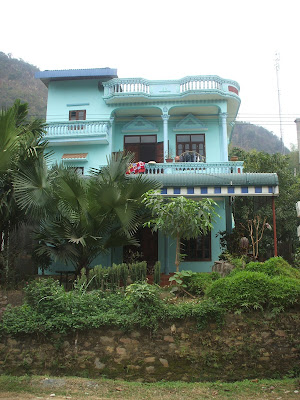 I don't ordinarily like blue houses, but traveling around Asia can affect your taste. 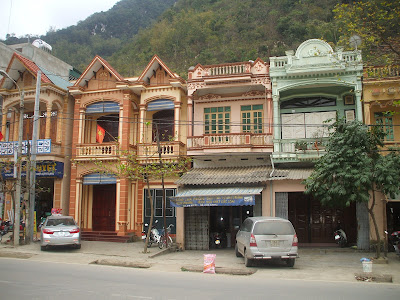 A street shot in town. 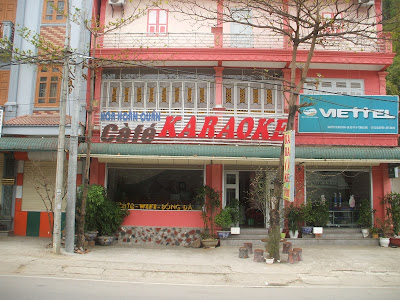 The Vietnamese love their karaoke, and you can find a karaoke bar or cafe almost anywhere. 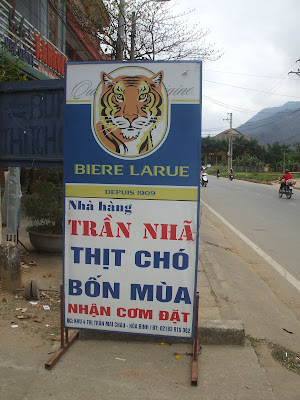 This is a sign in front of a cafe, and Thit Cho' is a dish made with dog meat.  Yep, it's a fact, they eat dogs. 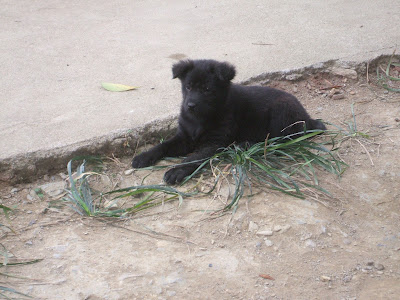 But they also keep some as pets.  However, they don't give them names.  This little pup was a real clown. 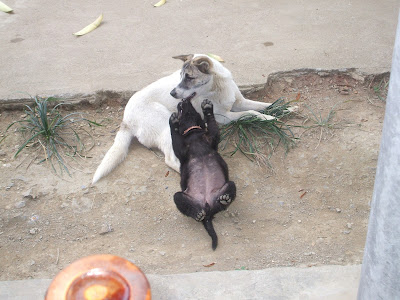 He pestered this larger dog constantly and the white dog was extremely tolerant.    They provided the entertainment at mealtime. I hope he doesn't become someone's dinner!

This was a great side trip--very relaxing and entertaining, and the best part was that there were very few tourists here.  Yes, I know I'm a tourist, too, but sometimes, I get tired of us!

Back in Hanoi this morning, I was awakened by the crowing of a rooster, and in my early morning fog, I thought I was still in Mai Chau.  It's amazing how much country life still exists in this city of millions.