When I arrived in Hanoi, I was driven to my apartment by a delightful man who, despite working from 5 a.m. to around 10 p.m. seven days a week, having little time to spend with his two young sons, seems to be a very happy person.  He spoke pretty decent English, which he learned from his customers, and he taught me a few Vietnamese words.  I think I won’t be a master of this language.  I learned from him and others in my time here that Viet Nam is suffering economically, while all its neighbors in Southeast Asia are prospering.  I don’t know the reasons for this--some say it's corrupt government--and I’m not inclined to do the research to find out why.

My taxi driver’s friendliness is not representative of what I’ve observed on the streets of Hanoi.  While Thailand is truly “the land of smiles”, you don’t see many smiling faces here.  I think life here is very hard.  People mostly look away from you when you’re walking on the streets.  Occasionally, someone will return my smile.  When you are buying a meal or a service, you get better treatment. 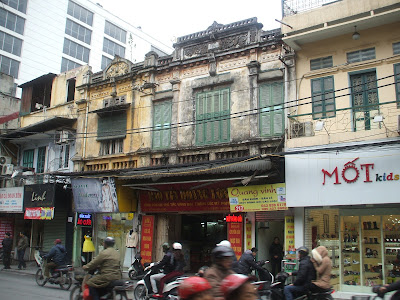 The Old Quarter is a great location for touring Hanoi, but it’s pretty run down and dirty. 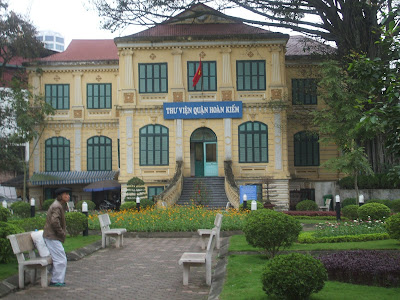 There's an occasional attractive building--this is the neighborhood library.


My apartment is in a very old building that sits behind the row of businesses that face the street.  So the street noise is muffled, which is a good thing.  But there’s a book store next door, and I can hear the staff pulling the adhesive tape off box after box after box, at all hours.  Sometimes it awakens me in the morning, although the last few days, the rooster has been my alarm clock.  I’ve heard about the bathrooms that have no enclosed shower, and now I have one.  So the bathroom floor is all wet for a few hours after I take a shower.  I have lots of space here, but I’d trade some of it for a space heater.  And I’d give blood for the bed I had in Sicily.  Asians like their beds really hard, and the one in this apartment is the hardest yet.

Navigating your way around the city is a challenge, mildly put.  You must drop the assumption that sidewalks are for pedestrians, and be wary at all times for motorcycles ahead and behind, because cyclists use the sidewalks as another lane to go the opposite way on one way streets or to get around a traffic jam. 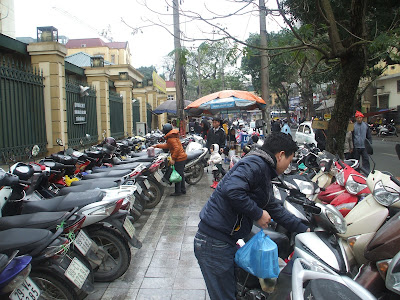 In addition to the danger of moving vehicles, the sidewalks serve as a parking lot for both motorcycles and cars. 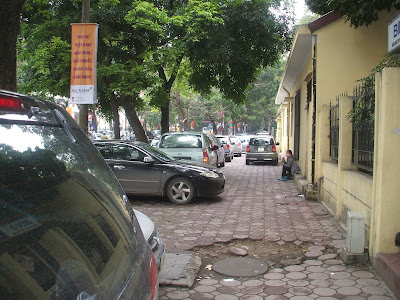 So you are often walking in the street, as close to the curb as possible to get around the obstacle course. And, as you can see, you also have to watch out for crumbled patches in the sidewalk and uneven tiles.

The traffic here is the worst I’ve ever seen.  If you have a green light to cross the street, you can’t be sure that all the traffic will stop for you.  The cars usually do, but the motorcycles will run red lights if there’s an opening in the traffic on the crossroad.  And you must always be alert for vehicles and cycles making turns.  They don’t stop for you, they dodge around you.  And drivers are constantly honking at each other and at you.

It’s quite chilly here by comparison to Thailand.  Today, it’s 63 degrees and drizzling and there’s no heat in the apartment.  I guess that’s typical too.  But after 2 months in 85 to 95 degree weather, I’m now feeling the cold like a southeastern Asian might!   The temperatures have occasionally gone up to the low 70’s, but there have been few days when I’ve seen blue sky.  There’s usually a light drizzle, so every day is a bad hair day.  I’ve had to get out my big girl pants and wear long sleeves and a jacket again, inside and outside.  It’s reminded me of the weather in Italy during November.

Narelle and Dong run a travel agency together, so I’m getting a lot of good advice about what to do and where to eat. 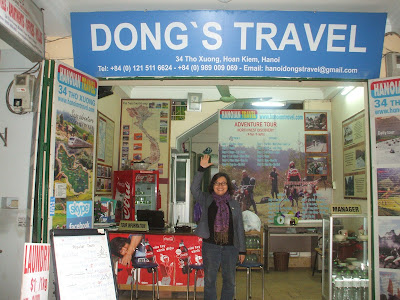 This is Dong’s travel agency.  She also has a laundry service (go figure). 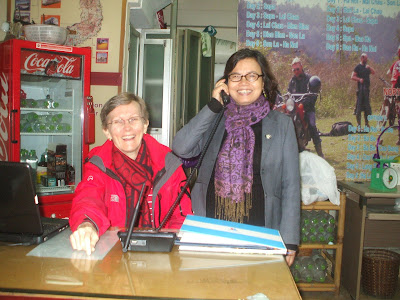 These two make a good team because Narelle handles the communication with English-speaking clients, and Dong makes the arrangements with the Vietnamese tour companies, hotels, and transportation services. 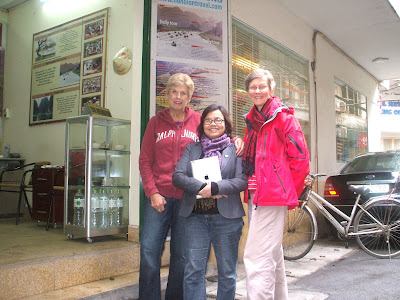 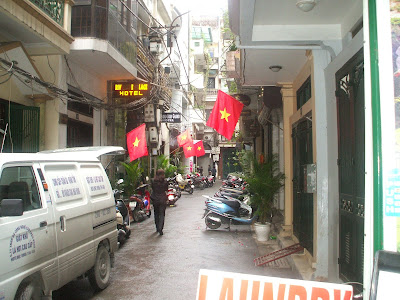 This is the little street where the agency is.  I don’t know how people find it.  There a dozens of travel agents within a two block area.  That’s pretty typical here—to find businesses offering the same goods or services clustered together.  I walked down a street a couple of days ago where every store sold only sunglasses.

Yesterday, I took a taxi to the Myanmar embassy to collect my passport and visa.  I decided to walk the 4 kilometers back to the Old Quarter. 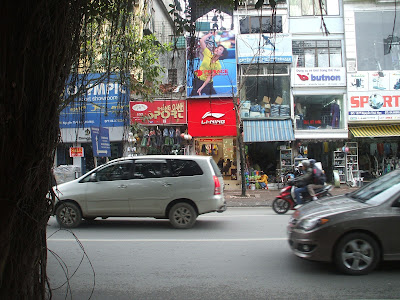 A street scene along the way. 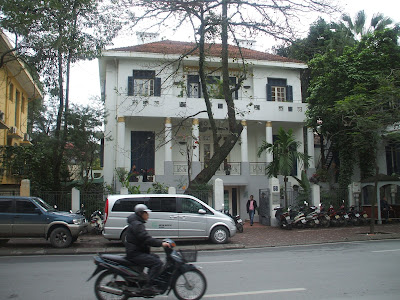 There are some lovely houses that remind you of the French influence. 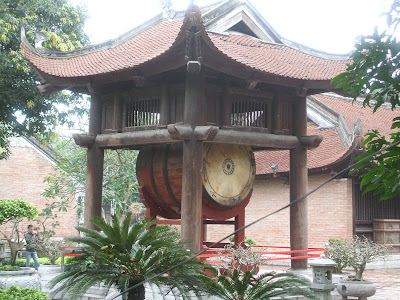 And temples to remind you that Viet Nam is also Buddist. 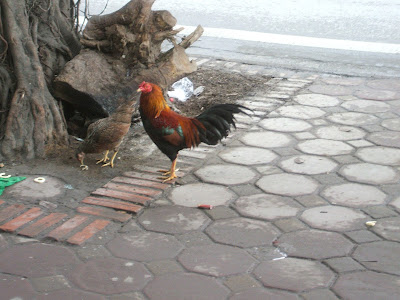 A curious thing about Viet Nam is the language.  Every word is one syllable, even if it looks like it might have two.  For example, here it’s Ha Noi, not Hanoi, and Viet Nam, not Vietnam.  There are numerous diacritical marks that change the pronunciation of vowels.

I’ve mentioned how much I like the food here. Something is wrong with the focus function on my phone camera, and I don’t carry my camera around with me all the time, so no illustrated food report from Viet Nam.  Sorry.