There’s something a little strange and uncomfortable about being in North Viet Nam, the only country to defeat the United States in war.  I wondered how an American might be treated here….if there was any lingering resentment of our involvement in a war that resulted in so many military and civilian deaths and casualties.   Even though people here aren’t all that friendly to me, I don’t think they can tell I’m American.  I’m just another white woman, among many others, touring the streets of Hanoi.

Some of the discomfort I feel is because I lost someone I cared about in the Vietnam War.  He was killed two weeks before his tour ended.  I’ve kept his letters for over 40 years now, and I read them at least once a year, in memory of him.  There are middle-aged men here that might have rigged the land mine that took his life.  That memory has been stirred up as I walk the streets among the people of the country where he lost his opportunity for a long life.  I’m suffering from a memory hangover.

Connie and I spent a few hours touring around the Women’s Museum here.  One floor was devoted to Courtship, Marriage, Childbirth, and Family Life, explaining the rituals and customs of various tribal groups, some of which were matriarchal.   Another floor was devoted to Religion, and I learned that in addition to Buddha, most Vietnamese also worship a Mother Goddess.  A third floor displayed traditional Vietnamese clothing.   On one of those floors was section on street vendors.  There are lots of Vietnamese women on the streets selling a variety of food stuffs, flowers, food, and domestic products.  Many of them are from outlying villages and are in Hanoi to earn money for their children’s education.   They carry heavy loads in two concave baskets suspended at opposite ends of a long pole, balanced on one shoulder.  They’re often chased from the streets by policemen, who sometimes confiscate their goods or cooking utensils, and they must pay a fine to retrieve them, often more than they earn in a week.  They’re a tough lot—these Vietnamese women—and they have a hard life here.

A fourth floor chronicled the role of women in the two wars that occurred between the years of 1945 and 1979—the war for independence from France and, of course, the “American War”, as they call it.  I was amazed at the number of women who served in combat roles and even led troops of men in battle.  And, of course, they served in more traditional roles caring for the wounded and maintaining agricultural production to fuel the war effort.   There were hundreds of thousands of women who fought in Vietnam’s war for independence from France, and more thousands who served in combat roles in the civil American war.    I don’t remember any news reports about these thousands of women serving in combat roles back in the years we were involved in this war.  As I read the information displayed in this area, it felt strange to be referred to as “the enemy”.    The South Vietnamese weren’t mentioned as “the enemy”, which I found interesting but understandable, since the outcome of the war was ostensibly celebrated here as a reunification of the north and south.

I also visted the Hoa Lo Prison, better known as the “Hanoi Hilton”, where American pilots were held as prisoners for several years. 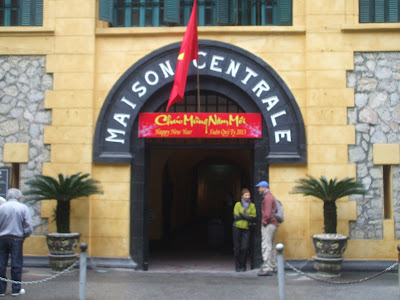 You’d never know this is the entrance to the “hell hole” (translation of Hoa Lo). 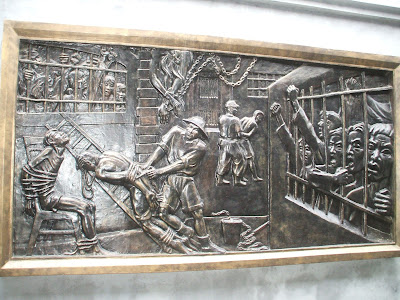 These are some murals in a prison courtyard. 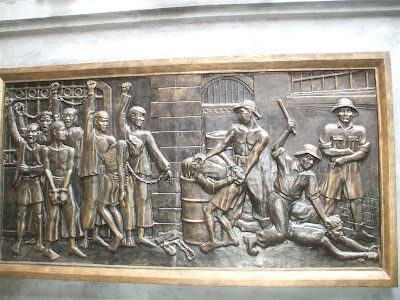 Much of the sad history of this prison is related to the French Occupation.

There are two rooms devoted to the American pilots who were imprisoned here.  In one room, the walls are lined with photographs of demonstrations against U.S. involvement in Vietnam—most of which took place in countries other than the U.S.  I know that there were demonstrations in other countries who sent soldiers to support the U.S. in Viet Nam, like Australia, England, and France.  But I wasn’t aware of demonstrations in so many other countries, and I didn’t know if this display was propaganda or the truth.  When I googled, I couldn’t find evidence to support the claim.

The photographs in the second room make it look like the pilots held here led a pretty cushy life—playing basketball, chess, and volleyball, preparing and eating Christmas dinner, decorating a Christmas tree, and reading letters from home. 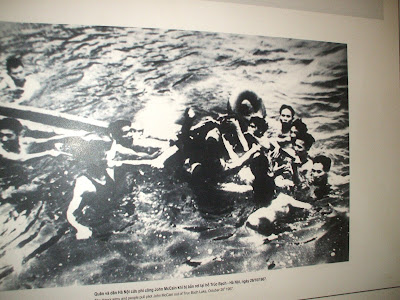 This is a photo of John McCain being rescued by civilians from the lake where his plane crashed. 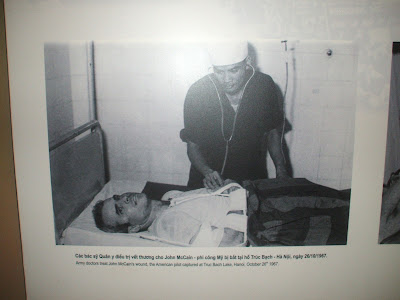 Although McCain says he never received medical treatment for his three broken limbs, here’s a photo of a doctor giving him care—doctoring photos must be a medical specialty. 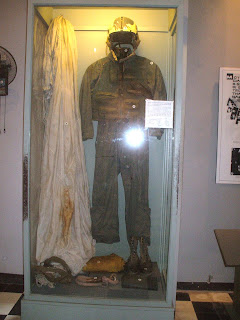 This is supposed to be McCain’s flight suit, parachute and other gear—funny that this exhibit appeared after he announced his run for the presidency.  McCain says the suit was cut from his body after his rescue. 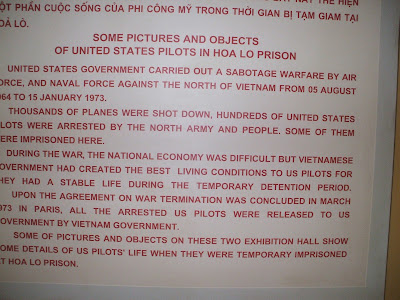 This government posting explains the extraordinary humane treatment provided to the American pilots.


This display disgusted me.  The propaganda machine of the Communist Party is still well oiled!

I think I’ll be happy to return to the land of smiles.


P.S.  I decided to wait until I was in the land of smiles to post this entry.  You never know when Big Brother is watching!