IN THE CRADLE OF CIVILIZATION 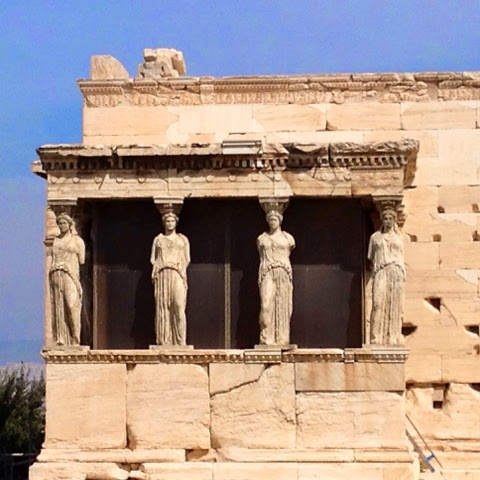 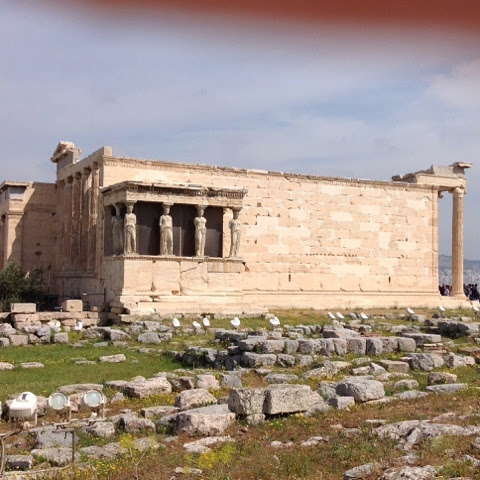 This is my favorite spot at the Acropolis.  With pretty much everything in ruins, you have to exercise your imagination to the nth degree to conjure up an image of life a few centuries B.C. when this was THE place where the Greeks paid tribute to their many gods including their special guardian, Athena, safeguarded the city.
Unfortunately, there is a restoration project underway at this time, and scaffolding (and hordes of tourists) interferes with any shot you try to get of the Parthenon.  This was the best I could do. 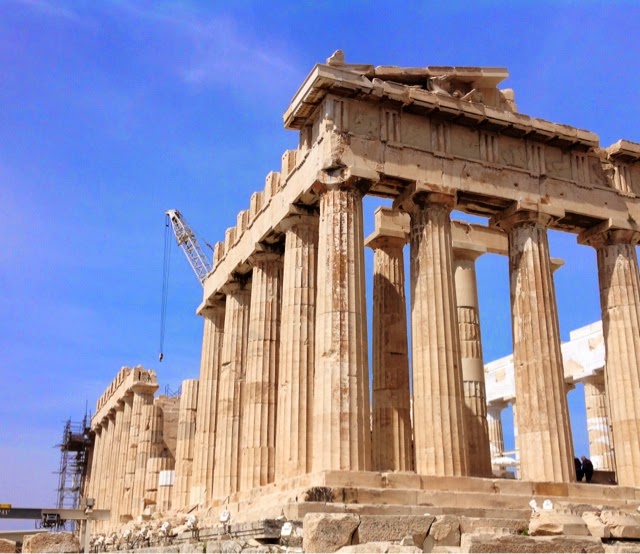 I arrived in Athens last Friday, a day after my friend Gayle from the U.S. arrived to visit her daughter Leah who has been here for a 10-week internship with the U.S. Embassy.  They graciously invited me to stay with them in Leah's apartment in an upscale suburban neighborhood.  Leah has one more week to work, so I've had the pleasure of spending some time with Gayle sightseeing.
The Acropolis is pretty awesome, but you do need some imagination to enjoy it. 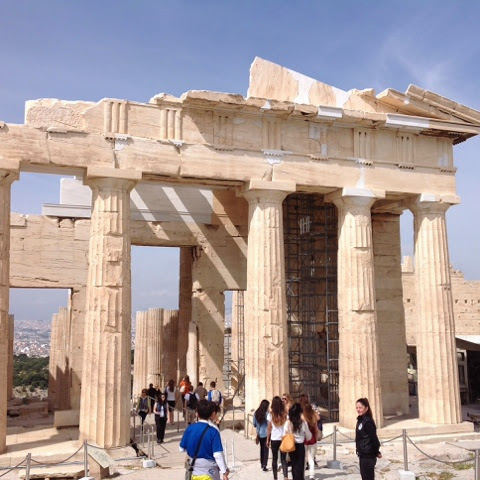 The beautiful relief carvings and statuary that once made the Parthenon a glorious place to worship have either been pilfered or removed to the Acropolis Museum for safekeeping.  What remains of most of the temples are merely the outlines of foundation stones.
There is a big arena that is recognizable as such.  Besides worship, the Acropolis was also a place where the wealthier citizens could enjoy theater. 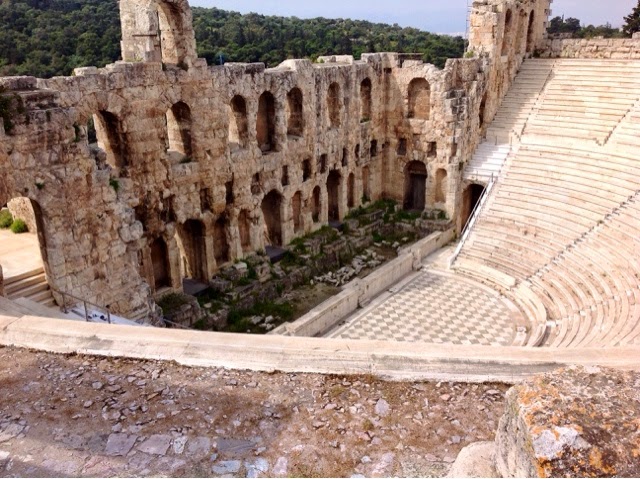 You can enjoy some spectacular views of the city from this rarified aerie. 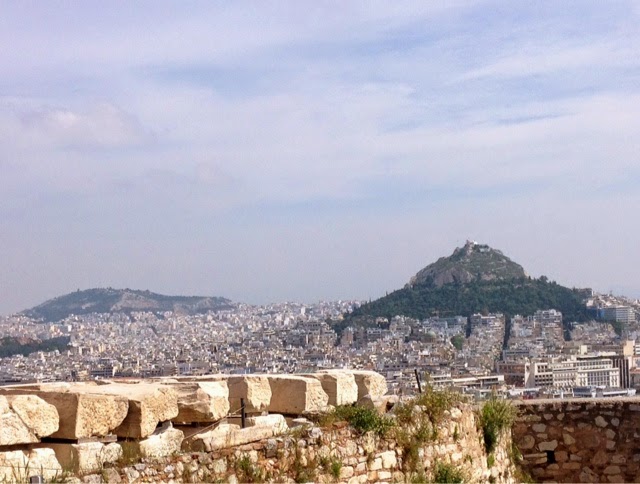 The Temple of Hephaestus, which is also in fairly good shape, stood out on the landscape below. 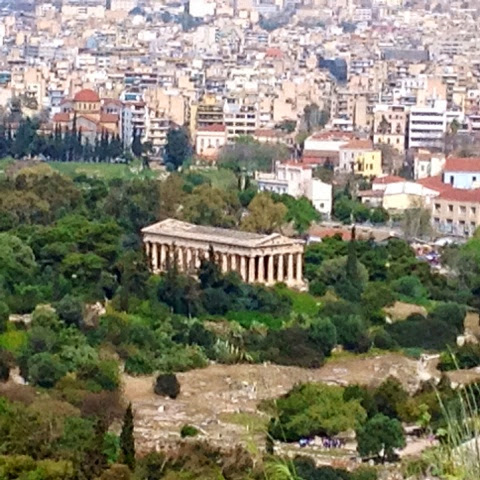 Here's a view of the same temple from the second floor of the museum at thr ancient agora ruins below. 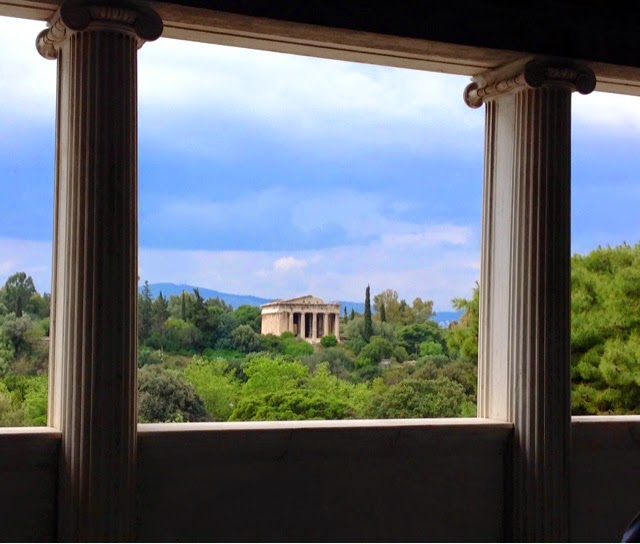 There were patches of wildflowers here and there to brighten the landscape a bit. 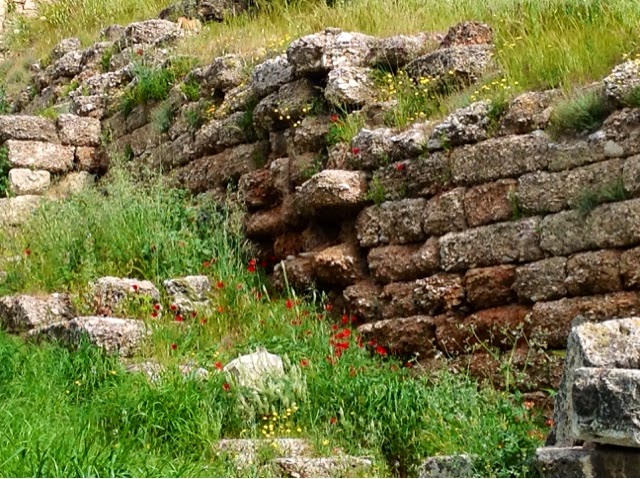 There weren't many statues around.  These three lions were among the few. 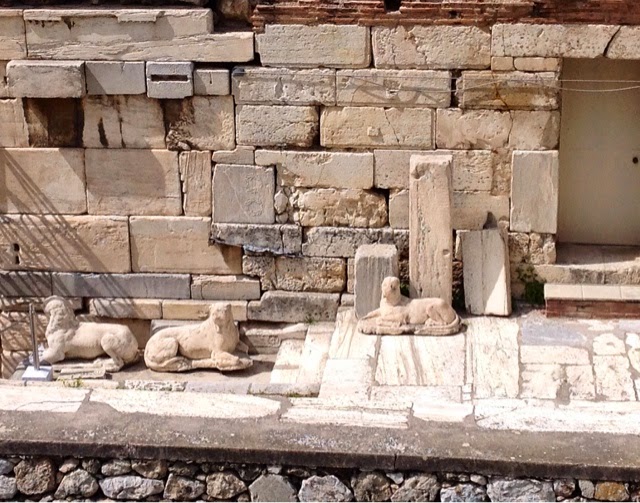 I can't explain the feeling of wandering through these ancient ruins that were the cradle of civilization.  There is wonder, gratitude, and soaring imagination.
I love Athens!  The people here are so friendly and helpful.  Here's one of the most charming ones Gayle and I encountered.  His name is Costas and his family owns the restaurant where we ate lunch this day.  I had my first taste of moussaka and it was delish! 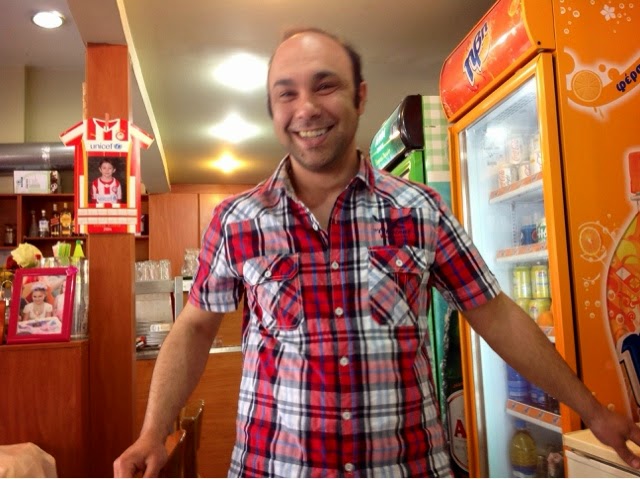