In Bali, for one day of the year, no one is allowed to leave their houses. The streets and beaches are patrolled to enforce this, and in addition, you are not allowed to watch TV, listen to music, work, light fires, or make any loud noises (although no one seems to have notified the roosters).  Every commercial establishment is closed, including the airport.

This day, called Nypei, is the traditional Balinese New Year, and it's today, March 31.  This is a Hindu holiday and there are many rituals which attend it.  Two days before, every Hindu on the island heads to the sea for a purifying ceremony.  (Talk about crowded beaches--that's 85% of Bali's 4.2 million population!)  On the night before Nypei (which we will call ogoh-ogoh night), the entire island makes a racket, rousing up all of the demons from their hiding places to join in the festivities. Then on Nypei, the island goes silent, in order to trick the demons into thinking there are no humans on the island, so they get bored and go away.

The Balinese lure the demons out by parading around homemade statues, called ogoh-ogoh, which are anywhere from 2 feet to two stories tall.  Most are traditional demons, with large, frightening faces, teeth, hands, and tails.  The ogoh-ogoh are carried on bamboo bases by anywhere from 12 to 20 men or boys, depending on the size.  Each village takes a collection for materials to make the ogoh-ogoh, and even foreigners like me are tapped for a few rupiah.  My village of Bentuyung made seven of them, ranging in size from 2 to a dozen and a half feet high.  It was dusk so my photos aren't great, but you'll get the idea. 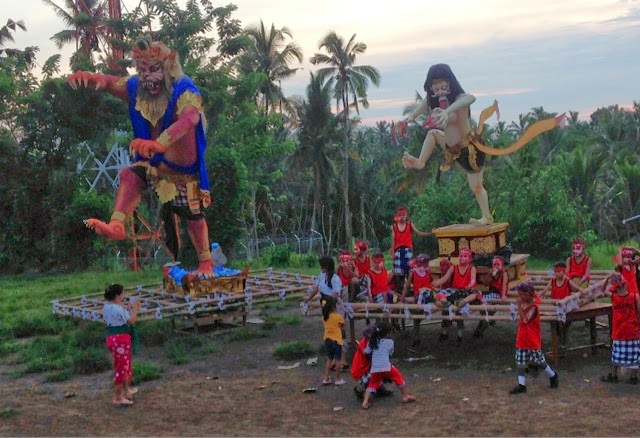 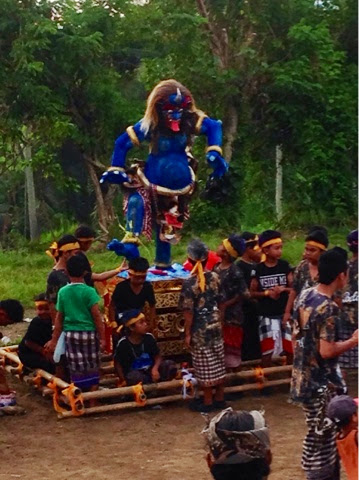 As usual, the Balinese carriers are colorfully costumed and painted.  Here's Kadek, the 8-year-old son of my adopted Balinese family, decked out as an ogoh-ogoh carrier. 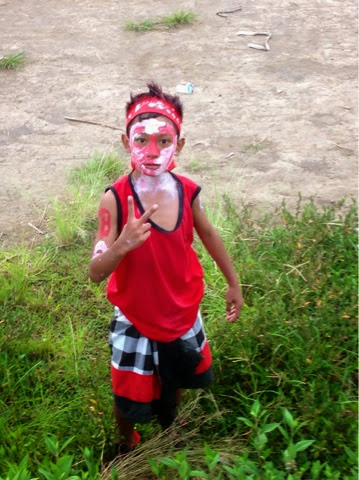 Everyone on the streets, including me, is supposed to wear traditional dress because this is a religious ceremony.  Kadek, the mother, provided me with a sarong and sash. 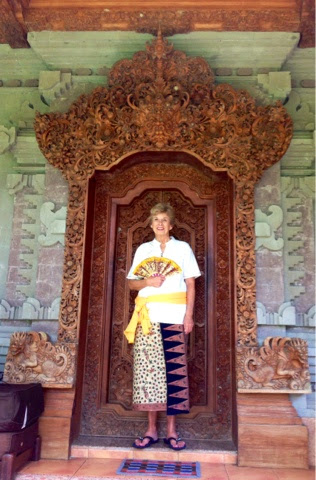 The carriers do the ogoh-ogoh dance in the streets to loud gamelan music which basically sounds like a lot of drums and gongs smashing together. The ogoh-ogoh are shaken and shaken during the dance, and when they lose heads or arms or break altogether, the crowd cheers. With the music, the darkness, and the ogoh-ogoh, it is easy to believe that demons are flying about, joining in the festivities. In the darkness, fireworks boom and flash, and the atmosphere seems exactly like a demon’s cup of tea. 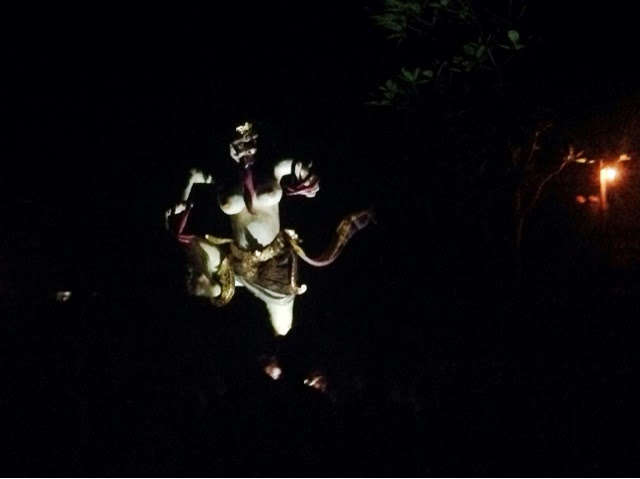 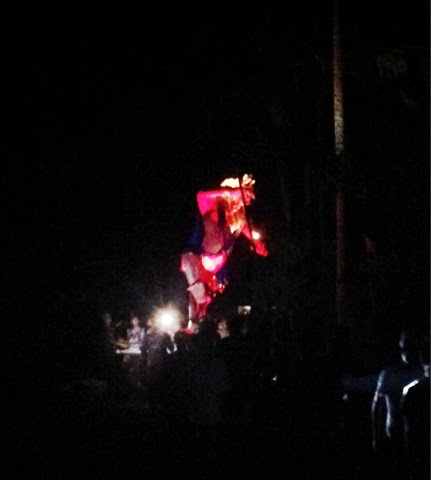 After the ogoh-ogoh have been paraded from one end of the village to the other, they are heaped into a pile and burned, all the while to the noise of fireworks, clanging Balinese music, and a cheering crowd.

I woke up on the morning of Nypei to the crowing roosters, as always, but there is no construction noise next door (yea) and there is no street noise.  I have invited Kadek's family to an Italian-American midday meal at 2 p.m., but they arrived at around 10 a.m because, Kadek says, they want to spend the day with me.  I hadn't even showered, but I didn't mind because the sentiment touched me.  Kadek wanted a picture of me in Balinese dress, so I showered and donned sarong and sash for some "family photos". 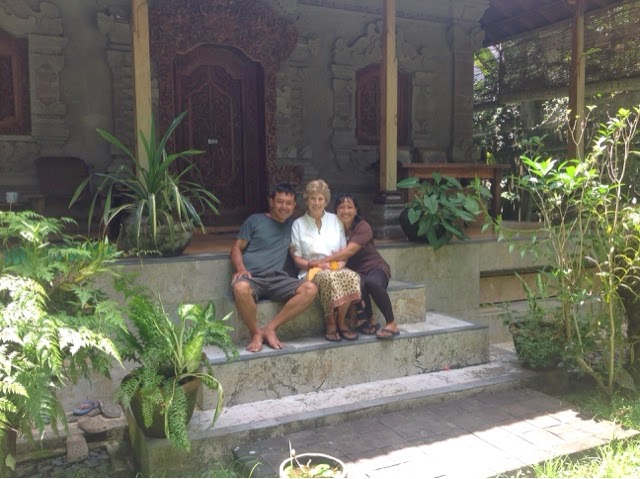 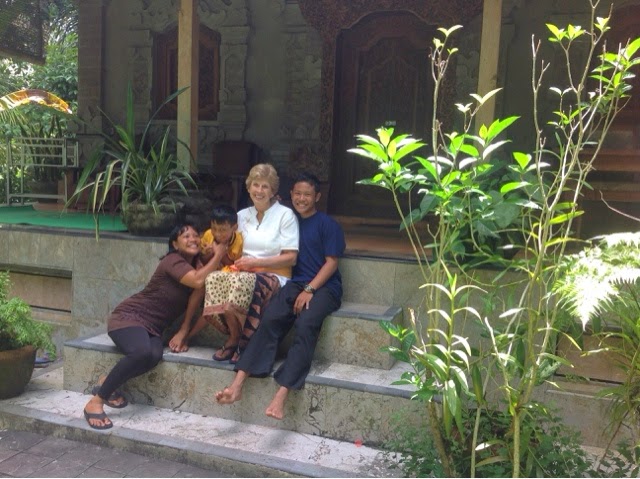 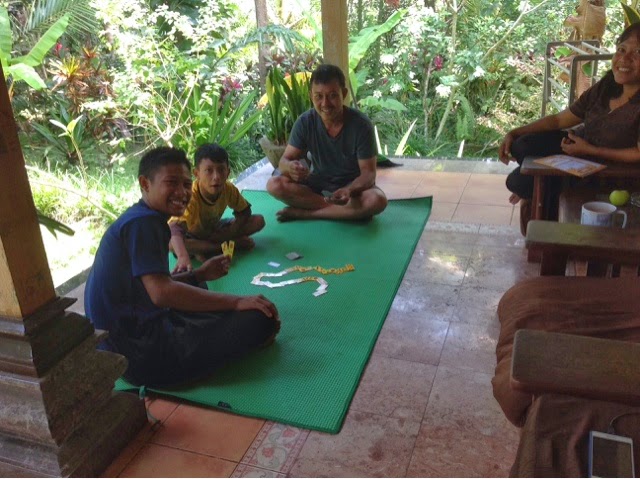 Kadek brought his pet rooster Kok for a visit.  I was absolutely amazed at what this rooster allowed Kadek to do to it. 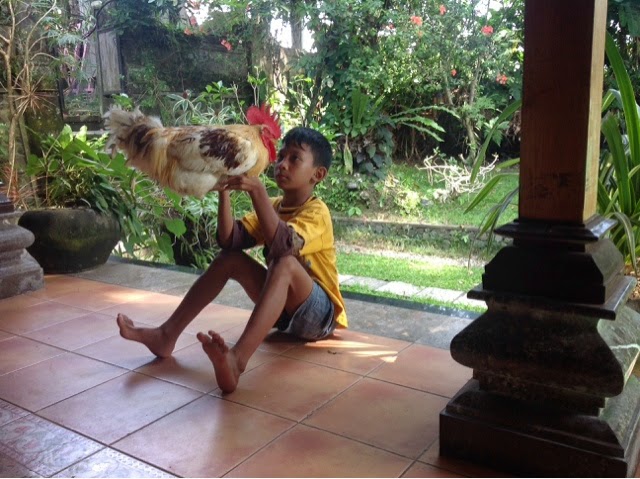 Whoever heard of a rooster hug? 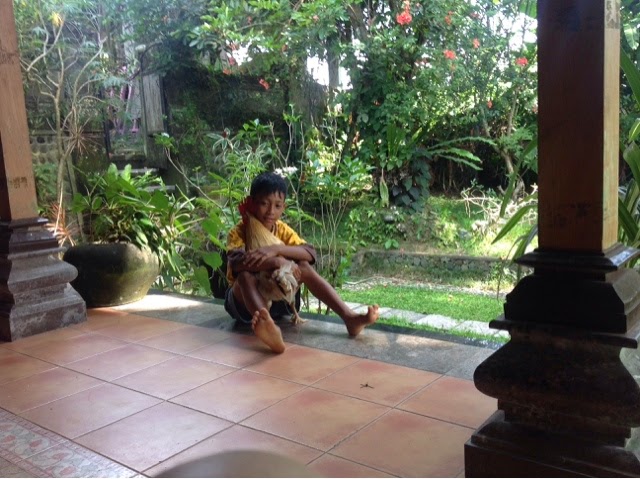 I made guacamole with chips and crackers and cheese for appetizers.  While avocadoes are plentiful here, they had never tasted guacamole and seemed to like it.  Camembert cheese was also a first.  Then we had spaghetti with meat sauce (pork, of course, no beef) and a salad.  I purchased a dessert because I don't have an oven or the kind of utensils and dishes you'd need to make any kind of dessert.  So it was lemon cheesecake with strawberries on top, but not cheesecake as Americans make, more like a light lemon regular cake.
We spent the evening together, cheating a bit with one small light on in the house.  Little Kadek had us laughing at his antics.  He can make playthings of ordinary objects.  I wish I had a video of him hopping around the room on the side of a cushion like he was a cowboy on a bucking bronco.  He was a non-stop whirl of energy and then he just dropped and was sleeping within minutes.  With no TV or lights allowed tonight, it's an early bedtime for all of us.  I'll be sleeping with my iPad!
What a warm and wonderful experience it was to spend this special day with this lovely Balinese family who have embraced me as one of their own.