Ah, so delightful to be back in bella Italia once more!

It was a long, grueling journey to get here.  My flight from Colombo, Sri Lanka to Rome was delayed for several hours, so the airline put in route passengers up at a hotel there (a Sri Lanka stamp on my passport!).  The hotel was right on the ocean, but it had definitely seen its better days—it was very old and run down.  But the bed was comfortable and I had a sound four hours sleep before being roused at 4 a.m. to catch the bus back to the airport.  It was dark when I got there and, of course, dark at 4 a.m., but I saw a beautiful full moon shining on the waves as they lapped their way to the beach.  I'm not sure why we had to be at the airport 2 hours in advance of the flight, because we didn't have our luggage and didn't have to go through Immigration again.  So we all yawned our way through the 2 hours until departure.

On the flight to Rome, I sat next to a young man from Sri Lanka who works at a bed and breakfast hotel in Rome because he can't find a job in his home country.  His wife, 9-year-old daughter, and 2 month old son live with her parents and they see each other about 2 months each year.  He's been doing this for 7 years.  He was talking to his wife on the phone before we departure until the flight attendant had to ask him to turn it off.  He said his wife was crying and he was close to tears himself.  What sad stories this depressed world economy is creating.

I had a scare in the Rome airport when I couldn’t find my passport during the boarding process for my flight to Florence.  It had somehow slipped out of the side pocket of my bag and was under the chair where I had been sitting.  Small panic attack!  But the universe seems to be taking good care of me, and I found it in the nick of time to catch the last transit bus to the plane.

I love my little apartment here in Florence.  It’s owned by two artists—a painter and a potter.  And their touches are everywhere. 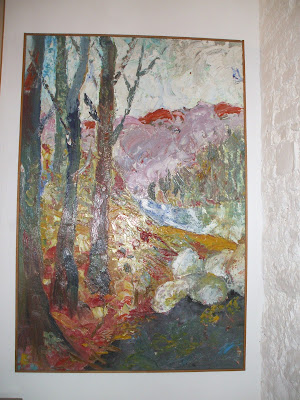 His painting in the living room. 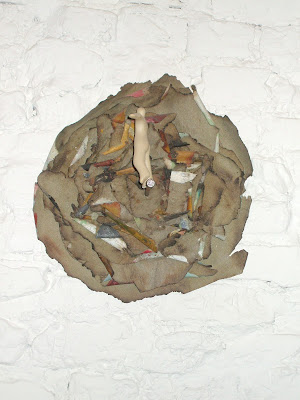 Her sculpture in the living room. 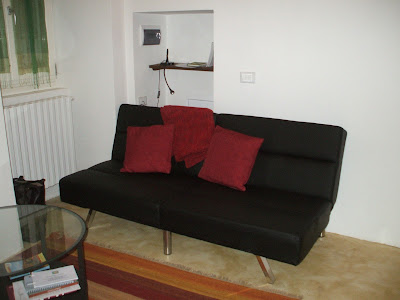 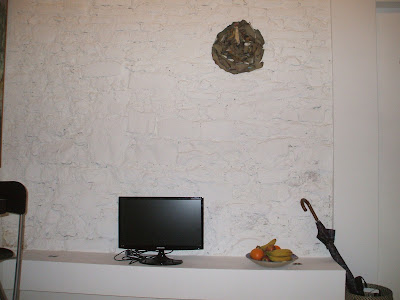 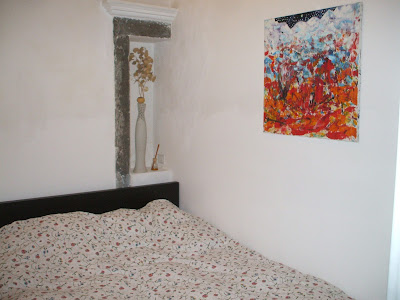 His painting in the bedroom. 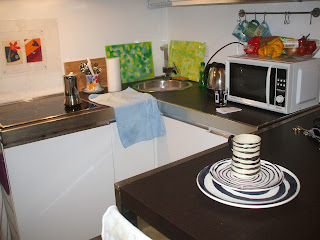 I have a very small kitchen. Those are dishes on the counter were made by my landlady.  There is no oven, but I have a couple of pans and can so some cooking here. 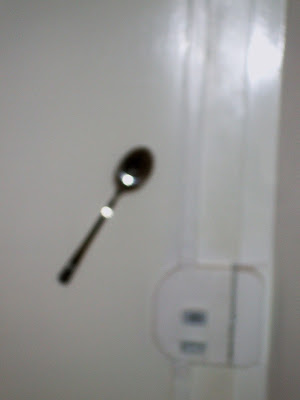 I love the spoon handle on the front door.

I wasn’t aware of this, but there’s a restriction on how much heat you can have here.  You’re limited to 6 hours a day!  I think this may be true for all of Italy, because I remember being cold when I stayed with my friends in Puglia in November.  I thought they just preferred to keep their house cool, but it may be that they had no choice.  It’s going to be in the low 50’s for the next week and I guess I hit the rainy season here, because there is rain and gray skies forecast for every day between now and April 12!  A different form of culture shock.  I’m going to have to buy some long underwear and maybe a couple of sweaters.

I have a television with over 200 channels, but only two are in English and there is no news channel in English.  Back to NPR on my computer for the daily U.S. news.

My landlady here is very nice.  She took me on a tour of the neighborhood yesterday to show me the best coffee shop, bakery, and trattorie, as well as the supermarkets, pharmacy, and laundry.  I don’t have a washing machine in my apartment.  I had lunch at the trattoria she said was the most economical and had the best food, and I had serious sticker shock when presented with a bill of 22 euro.  Granted, I had the pasta with truffle sauce at 12 euro, which was a little disappointing (black instead of white truffle—huge difference in taste, and it isn’t truffle season), but only a salad and some water with it.  That was a $28 lunch!  So I promptly trotted off to the supermarket and bought about 60 euros worth of groceries.  I will be making most of my own meals here.

There are so many more cultural activities here, and I’m delighted about that.  Next week, there’s a Middleastern film festival sponsored by the local movie theaters (there’s one theater here that shows films in English—yea!) and there’s also a music festival.  Tomorrow, I’ll see the Florentine version of an Easter parade.  I’m going back to language school for a couple of weeks—there are several within a 10 minute walk of my apartment.  I’m in an ideal location, in a “local neighborhood” across the Arno from the city and within walking distance of almost everything.   The streets here aren’t crowded with tourists, so I will have a more authentic living experience. 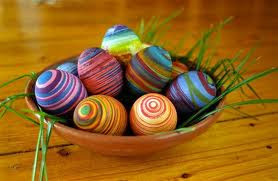 I wish all my friends and family and unknown readers of my blog a very Happy Easter.  To my friends in Italy, Buona Pasqua!