Day 4:  Finally out and about!

It was my first day out and a pretty strange beginning.
Not so strange was meeting up with Scott Parks, a young friend from home, and his Thai girlfriend Gun (a nickname for her really pretty flower name). 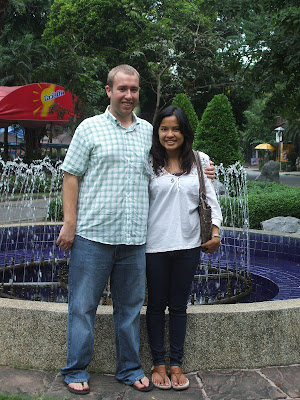 Scott was an organizer for an international dining club I belonged to in Detroit, which pretty much fell apart when he moved to Thailand.  He came here to pursue a relationship with Gun, who he met during the year he taught at an English language school in Bangkok (where Gun still works).  Because Scott enjoys eating as much as I do, I expected he would introduce me to some good restaurants here, as well as give me advice on making the most of my Bangkok experience. 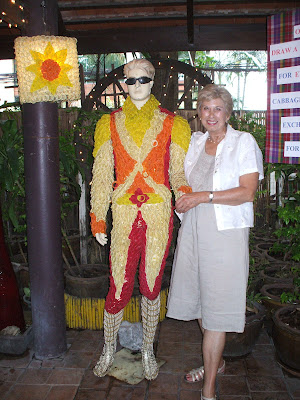 This fellow was our greeter.  His clothing is made entirely of colored condoms. 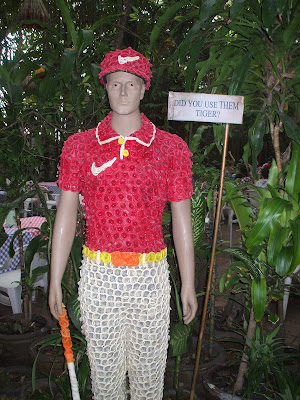 Then we encountered a Tiger Woods (kind of) look-alike. 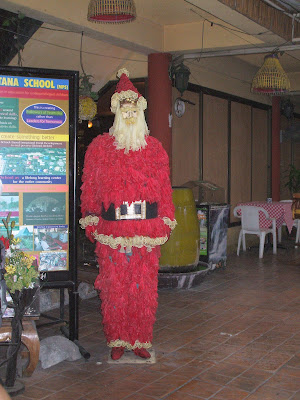 And, because it's the holiday season, there was a nod to the West with a condom Santa Claus.  Notice how much trimmer Santa is here. 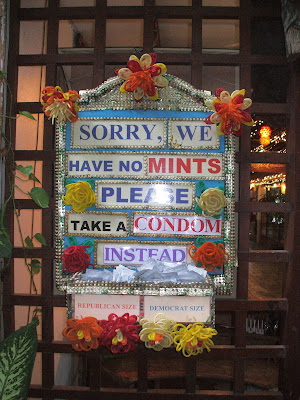 I couldn’t figure out where the Cabbages came in.  While there were condoms everywhere, there was no “Cabbage Man” or Cabbage Patch Doll or anything else that would explain the reference.  The food was really good, but I think Scott chose this place more for its uniqueness.  Some context might explain why anyone would give this name to a restaurant and have such a blatant display of condoms in it.

For those who are not aware, Bangkok is one of the hubs of the “sex industry”.  Prostitution is legal in Thailand and regulated by the government.  The social views of Thais about prostitution are quite different from ours in the U.S., and it’s fairly widely accepted by both women and men.  There is, however, a high rate of HIVAIDS, especially among sex workers. The restaurant was founded by a non-profit family planning organization which has campaigned to increase awareness of safe sex and birth control practices in Thailand.  So that explains it all!  I was left scratching my head about the cabbages, though. (I later learned that the leader of this organization, known as Mr. Condom, believes that birth control should be as accessible and accepted as buying vegetables from the market, and Thais apparently buy a lot cabbage.)

After this unique dining experience, we set off to visit a teak palace, but the taxi driver told us it was closed.  Scott’s Plan B was to visit the Grand Palace, but it was closing at 4 p.m., and it was already 3:30 p.m.  We were near a zoo that neither Scott nor Gun had visited, so that’s where we went!  It was kind of a combination park/zoo with a couple of small ponds and a river ran through it.  Lots of families were boating there.  We spent a couple of hours wandering around. 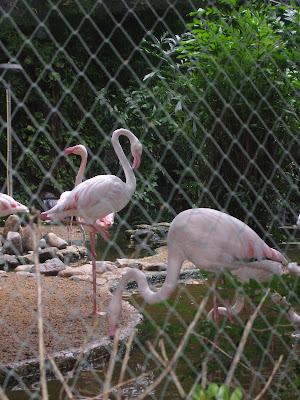 A big flock of pink flamingos. 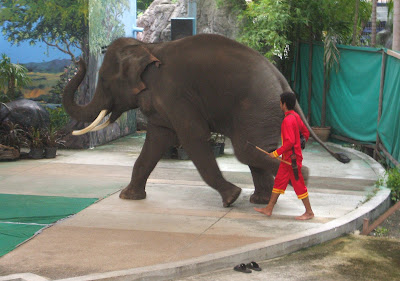 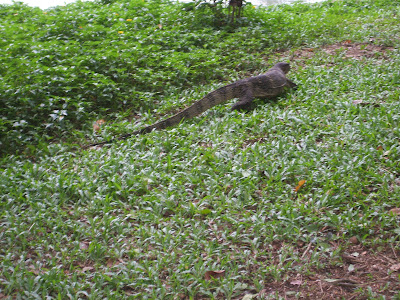 One of our stops on the way back was a HUGE mall (there are many of them here) where there was a gourmet grocery store that Gun wanted to show me.  We spent about 20 minutes looking at just the fresh fruit and vegetables and all the prepared foods and Thai snacks you could buy there.  Then we had dinner at a Chinese restaurant in the mall that Scott wanted to try.  It was some of the best Chinese food I’ve ever had.  Here’s the young man who kept our tea cups filled. 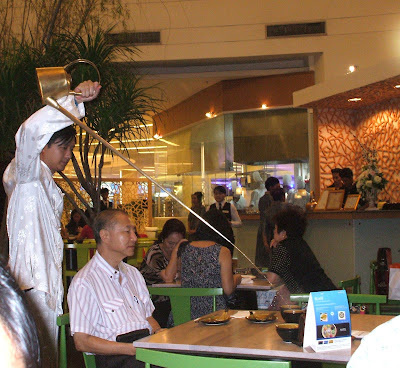 It’s hard to tell in this picture where the spout of his glittering teapot ends and the stream of tea begins, but the spout is about 3 feet long.

Outside this mall, another nod to us Westerners—a giant Christmas tree with a Happy New Year wish.  I don’t know why it shows up as pink in this photo—it was white. 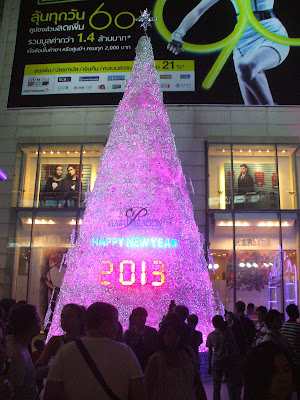 On the way back, Scott instructed me on the use of the above ground Sky Train and the underground subway system.  I have to use both to get anywhere.  You don’t want to drive here—it’s madness on the roads, much worse than Italy.  Also, they drive on the left side.  Scott doesn’t have a car, which really surprised me, since he works for GM.  When I expressed this, he explained that cars are very expensive here, and, of course, gas is, too.

The following day, I met Scott at the Weekend Market.  I’m proud to say that I successfully navigated myself to the north side of the city to meet him at the appointed subway station.  There is no way to take a picture of this market.  It covers about 35 acres and has more than 5,000 stalls.  You could literally shop until you dropped.  You can buy household goods, clothing and accessories, Thai crafts, religious artifacts, animals, and foodstuffs.  It’s estimated that over 200,000 people visit this market on weekend days.  My pictures couldn’t begin to capture the enormity of this place.

On the way back, I made a stop at another huge mall to pick up a couple of things and wander around in the air conditioning.  When I asked Scott what people did here to amuse themselves, his answer was “they go the mall to shop”.  Considering how hot it is here, I can appreciate that.  When I got to my subway stop, I decided to walk the rest of the way to my apartment…about a mile, I think.....not a really the wisest decision because of the heat.  But it really helped me to get my bearings, so if there’s ever a time I can’t get a taxi, I have confidence I could find my way home.

Impression of Bangkok after my first experience out and about—it’s a sweltering mass of humanity.  You can be easily overwhelmed by both the heat and the crowds.  I hope I can tolerate both for a month.