Cambodia is a very poor country of about 14 million people, 97% of which are Buddists.  People here are lucky to make a dollar a day.  And it’s U.S. dollars that are prized.  The prices here for food are higher than in Bangkok—for transportation, it’s about the same.  There are no metered taxis.   Instead there are hundreds, maybe thousands of tuk-tuks—carts pulled by motorbikes.  Since it’s also VERY hot here, driving in an open air cart is actually quite refreshing, but the traffic is pretty scary.  A mélange of bicycles, tuk-tuks, cars, vans, and buses sharing mostly two-lane roads.   Very exciting.


The temples of Angkor are pretty amazing.  I’m not sure who had the contest for “seven wonders of the world”, but they were a finalist and I can see why.

I traveled here with Dolly, a woman I met in Bangkok, who is a university administrator there. 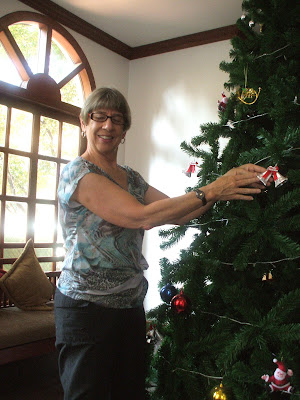 There were Christmas trees here, too.

We spent the first day on our own exploring the temples of Angkor for maybe 3 hours before we were prostrated by the heat. 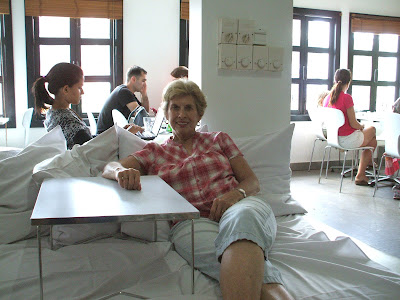 We had lunch at an interesting little restaurant that offered traditional table seating and a more relaxing venue.

The second day we hired a guide, and that elevated our experience by several notches, although we didn’t survive the heat much longer.  Even though I could understand only about 60% of what the guide said, I learned a lot.  He was very knowledgeable about the history of the Khmer empire.  The Cambodian people still call themselves Khmer, not Cambodians.

Our guide, Bora, also told us also about his family’s experience during the Khmer Rouge, and it wasn’t pleasant.  It was a time when educated professionals and public officials in Cambodia were killed by the new Communist regime, and this country is still feeling the effects of a shortage of qualified leaders to forge a more prosperous future.  Some of Bora’s family members were killed in this purging, and his family was later separated when the Communist regime forced people from the cities to labor camps in the countryside, claiming that the U.S. was planning to bomb the cities.  The intent of the Communist regime was to transform Cambodia into an agrarian society.  Bora’s family was later reunited, but those years took a significant emotional toll on the people of Cambodia, and there are no mental health services here to assist the many people who still suffer from stress related  diseases.

The temple grounds cover 500 acres where there are about 1,000 temples in various stages of ruin. 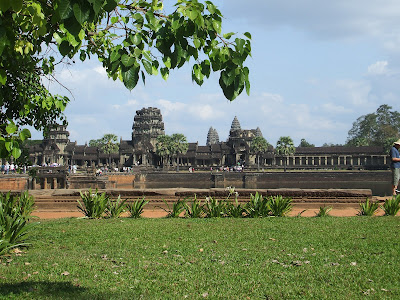 This is our first view of Angkor Wat, probably the most famous temples here:

There are many restoration projects ongoing, sponsored by several different countries.   Some of the damage to the temples is due to natural causes—erosion, forestation, etc.—and some is a result of centuries of wars with neighboring countries.  The earliest temples date back to the 10th century, and it is kings who have built most of them, to “make merit” for themselves and their families.  The shots you'll see in this blog are from a few of the several temples we saw.

What I was most fascinated by were the carved stone murals that depicted the history of the Khmer people.  They touched on all aspects of Kymer life—wars with the Cham and the Chinese, market trading, gambling, royal life, religion, etc.

Here's one that depicts a battle with the Cham, from Champa which is now Vietnam.  The guy with the pointed beard is Chinese.  China was an ally of Khmer in this battle.  The warrior with the elongated ears is Khmer, and the ones with the lotus hats are the enemy Cham. 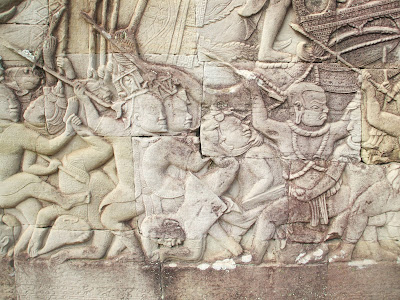 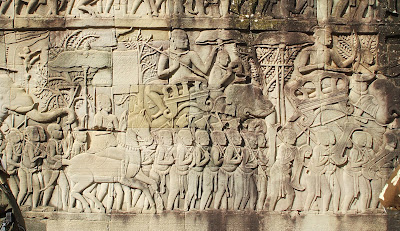 At the time, elephants and horses were the beasts of war.  This is a military procession. 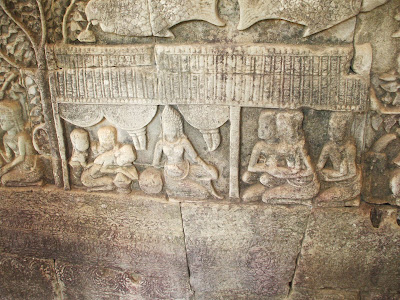 This one shows a queen and her attendants. 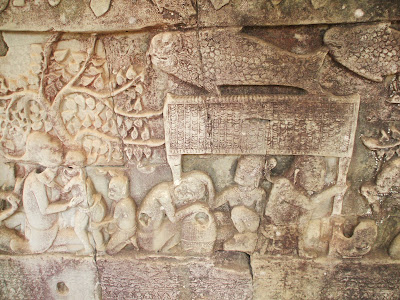 And this one is a market scene.

These murals are in remarkably good shape.  The restoration work is focused mostly on cleaning them.  I took lots of pictures, but I think these give you an idea of how intricate the stonework is.

Ancient Khmer was a Buddhist empire, but most of the Buddha statuary was removed from the temples by conquering Hindu nations.  You see more Hindu gods depicted here than Buddhas. 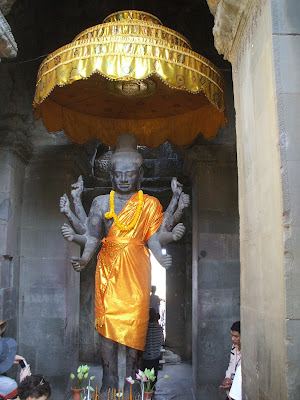 This is an example of one of the Hindu gods. 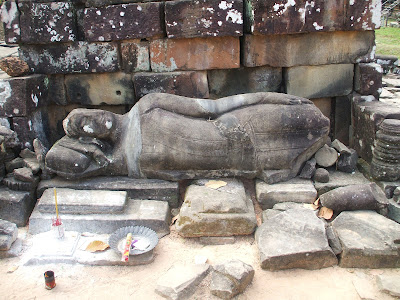 And here’s a reclining Buddha that’s not in such great shape.

There are also a number of towers that have faces like this on each side…. 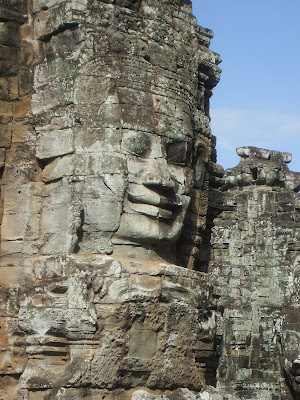 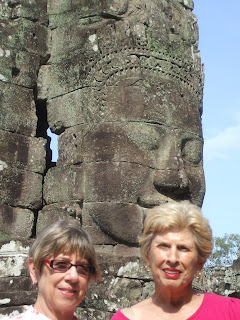 These faces look a little out of place, don't they? 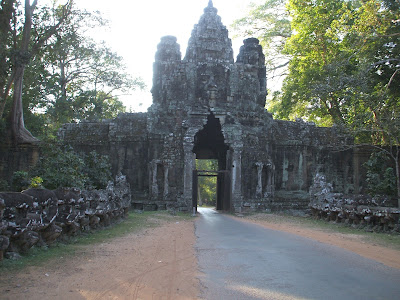 The largest temple is surrounded by a moat and stone walls.  Here’s one of the entrance gates, which are identical.  The stonework on the gate and all the statuary leading up to it has meaning, but I didn’t understand what our guide was saying about it. 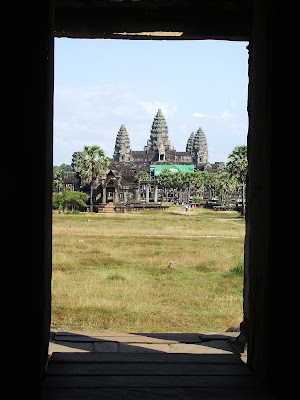 A view from a doorway of one temple to another. 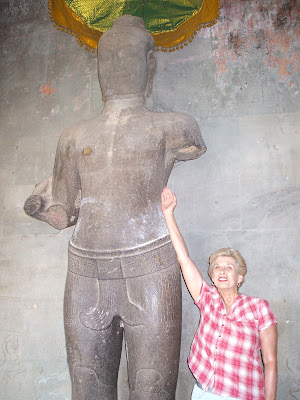 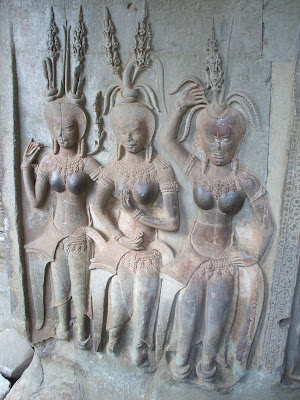 Some ladies who are still in great shape after hundreds of years! 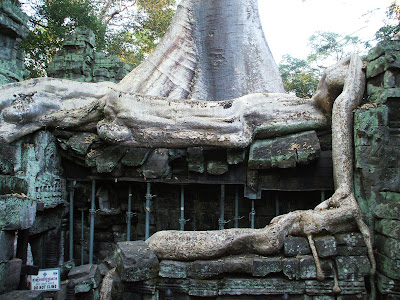 At one of the temples we saw, tree roots had grown over the walls, creating an odd marriage between the man-made and the natural. 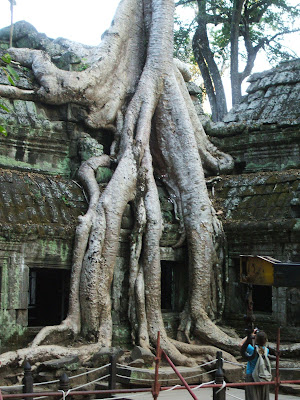 Sometimes you need a person in the way of your camera shot to understand the enormity of the situation! 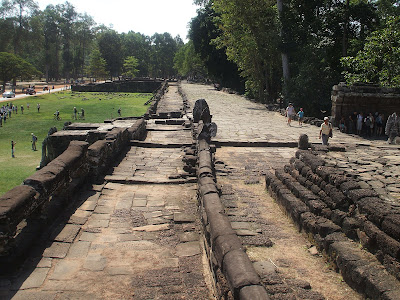 This is only part of a huge balcony that was attached to the royal palace that stood on these grounds.  The palace was destroyed by the Cham, rebuilt, and then destroyed again.  The lawn in front is where performances to entertain the royals would take place.

At one time there was a city of a million people that surrounded the royal palace and its grand temple.  Houses were made of wood, and they were all burned to the ground at the same time the royal palace was destroyed.

The Khmer Empire was once the most prosperous region in Southeast Asia, but you wouldn't know it now.  But hints of its grandeur remain, carved in the stone walls of these amazing ruins.
Posted by Unknown at 1:21 AM

I read a really good book about the Khmer Rouge situation in Cambodia called First They Killed My Father by Loung Ung. It's a young girl's first hand account of life in Cambodia during that time. It's very sad.