I spent last week in Tours, France, in the heart of the Loire Valley with all its châteaus and vineyards.  I got a fever on the train from Avignon and had a pretty miserable ride, not just because I wasn't feeling well, but because the design of the seats on the train resembled economy airplanes.  It was a long, umcomfortable six hours.  The two days I was sick in Tours were the only two days of sunshine.  It rained for the rest of the week, not all day, but for the good part of the each day.
I came to the Loire Valley to see the famed châteaus.  I was planning to see six of them, but after a couple, I thought four might be enough.  You could easily get "châteaued out".  The first I visited was the Château d'Amboise, once the home of King Charles VIII after his political union with Anne of Brittany.  It was once a palace with extensive grounds, and Leonardo da Vinci died and was buried on its grounds, but after its service to royalty, it was confiscated during the French Revolution and suffered a fire.  Only about a fifth of the original buildings survived, and for a time the remaining building was used as a prison.  It was renovated and opened to the public in the 19th century. 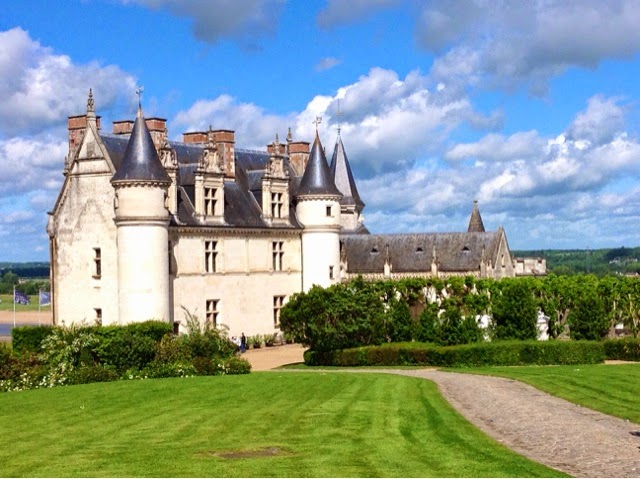 The view of the Loire Valley from the terrace is beautiful. 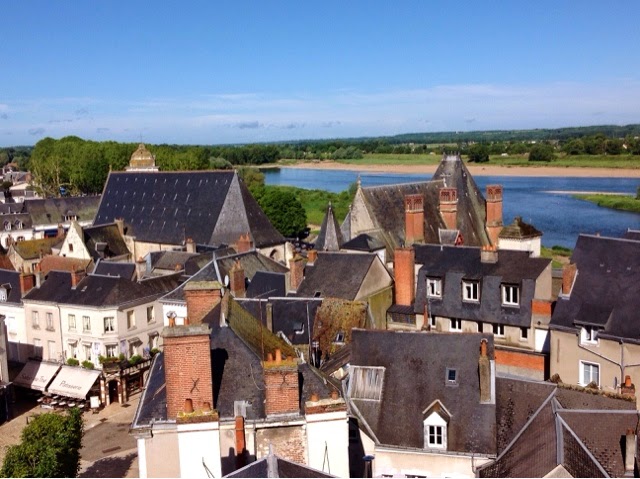 This Council Chamber was used for large celebrations.  The throne here was one of the few pieces of furniture.  Maybe everyone else had to stand? 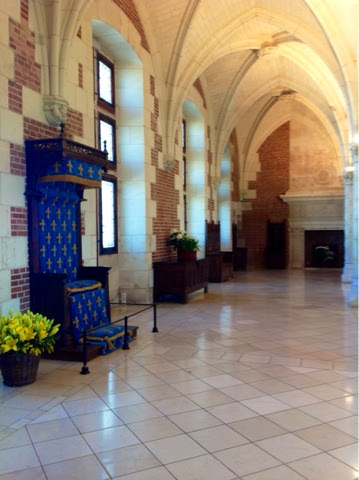 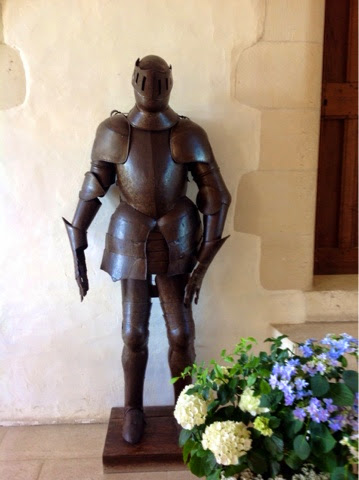 The Music Room displays a number of souvenirs of the Orléans family. 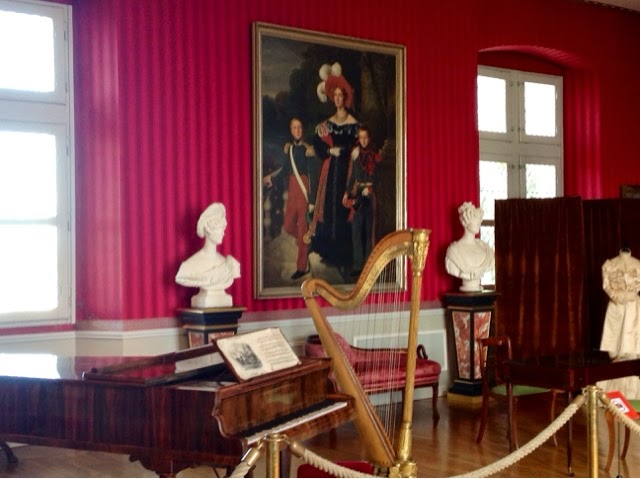 There are several beautiful tapestries depicting scenes from royal life. 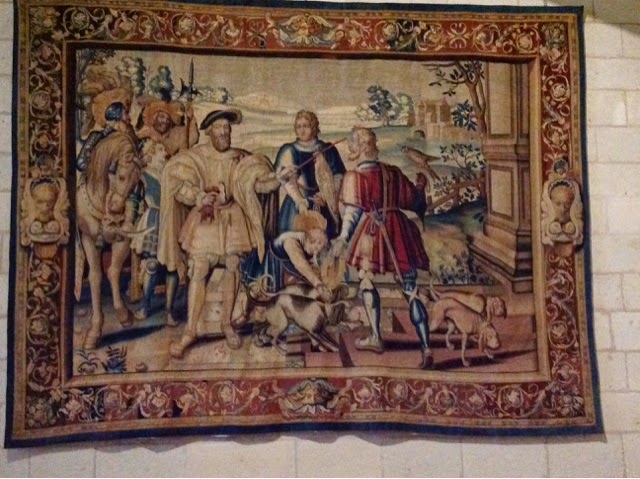 This game room held several tables for playing cards and other games for royal amusement. 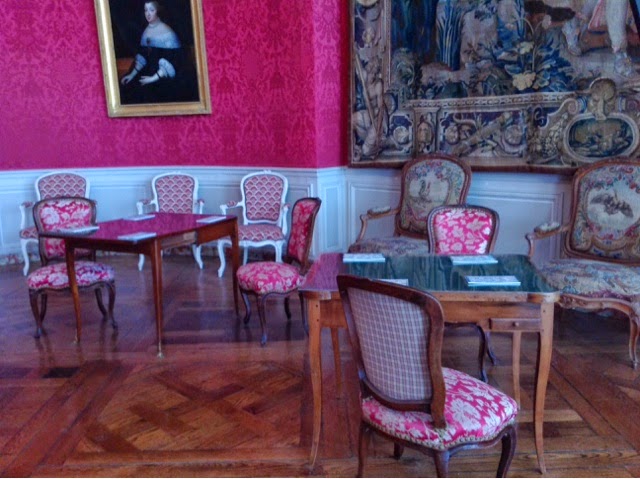 There were portraits of royalty in every room.  This is Louis-Philippe. 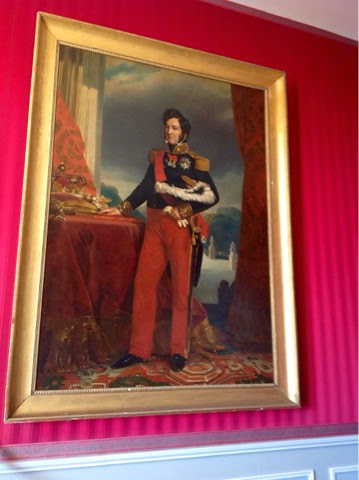 I don't remember who this is, but she's pretty. 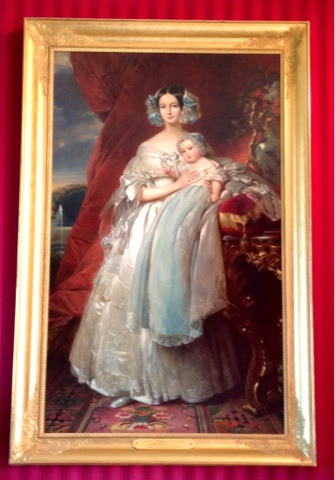 The gardens were mostly sculpted greenery.  I wouldn't want the job of keeping all these bushes trimmed to perfect rounds. 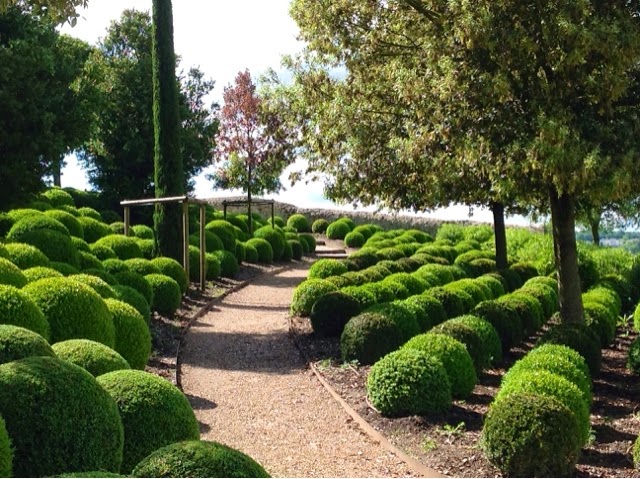 I liked this tree, which I think is a Lebanon cedar. 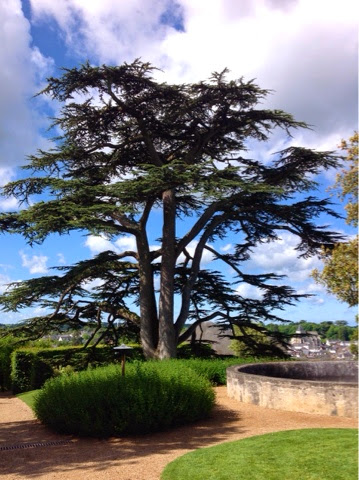 The second chateau I saw was one of the two most visited in The Loire Valley--the Château de Chenonceau, which spans the River Cher.  This château was given by King Henri II to his mistress, who was then ousted by Queen Catherine d'Medici upon Henrii's death. 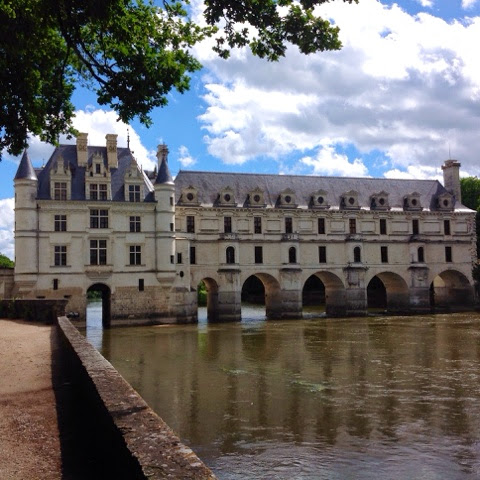 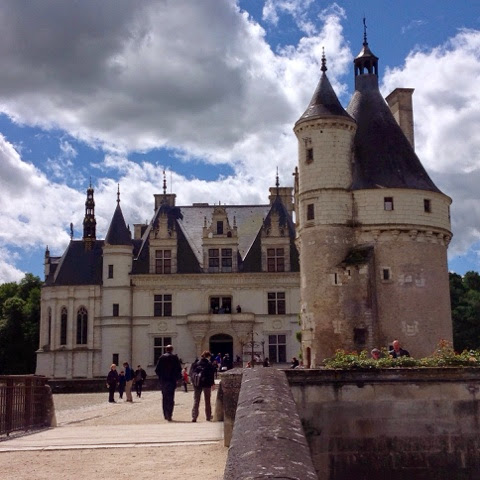 One of my favorite areas in this château was the kitchen, which was a series of about five rooms, each displaying beautiful copper pots. 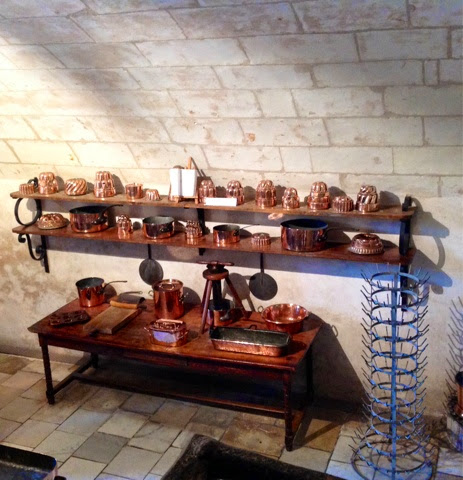 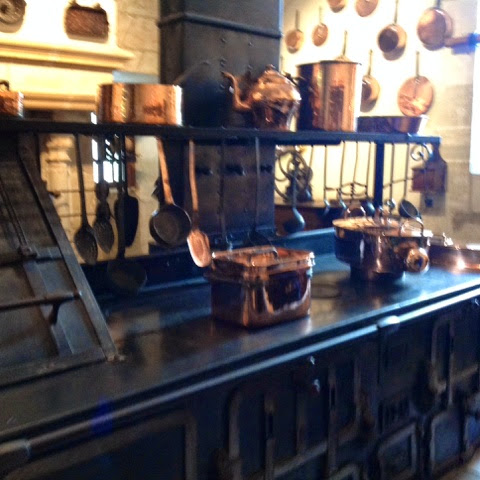 This was the butchering room, overseen by your friendly neighborhood boar. 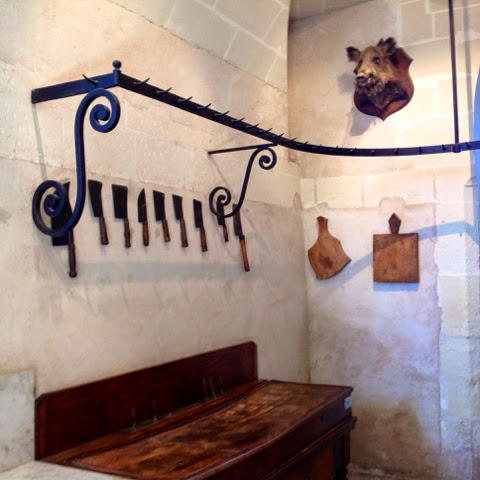 The scorned Queen Catherine spent her years in mourning here for her cheating husband.  Were any Kings faithful?  Doubt it. 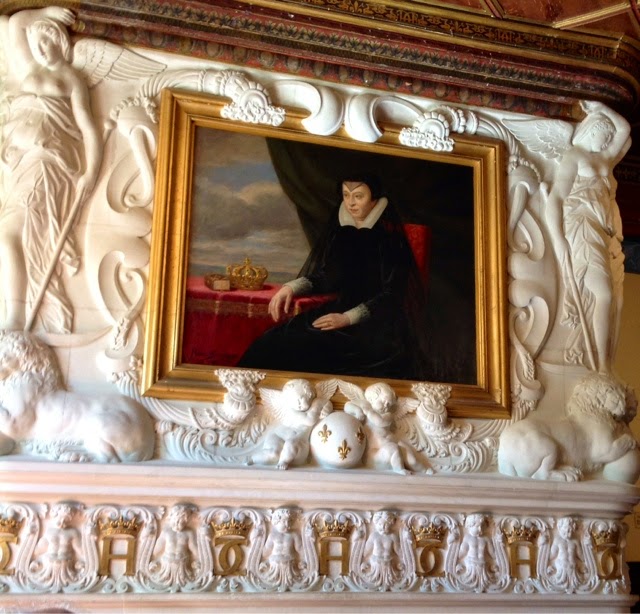 The bedrooms were draped with beautiful tapestries. 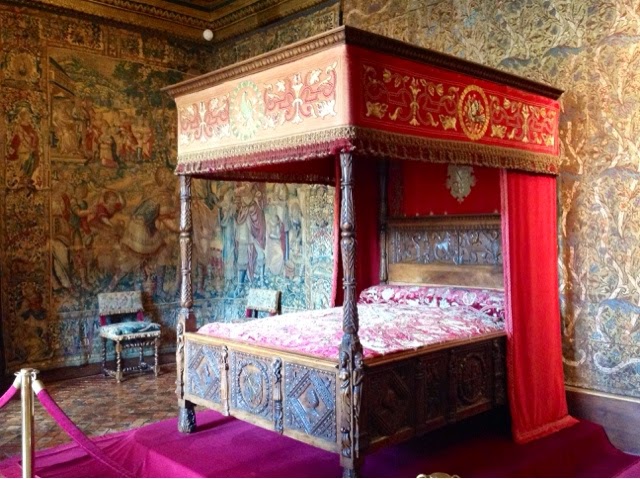 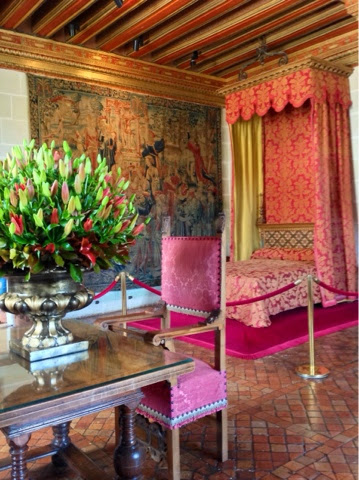 It was really hard to get good photos here because it was crowded with lots of tourists.
The third château I saw was the second of the two most visited in the valley and the largest--Château de Chambord.  It was built by King Francois I as a hunting lodge.  Lodge wasn't the first word that would come to my mind to describe this grand royal abode. 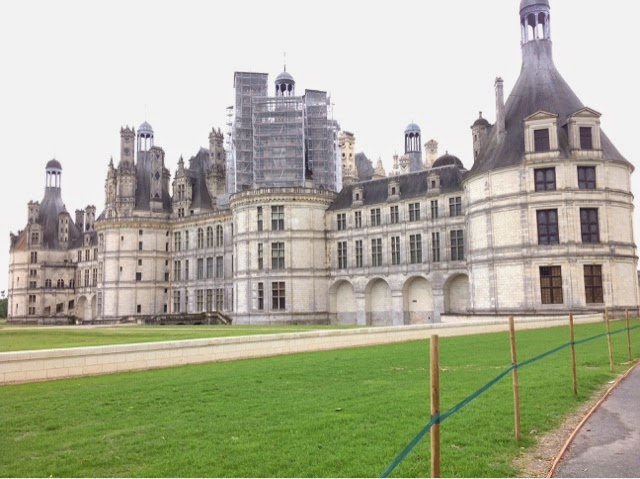 This is the hunting King Francois I. 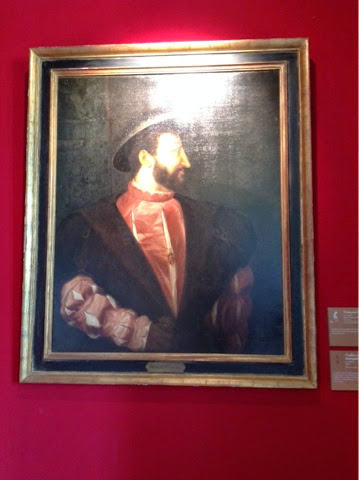 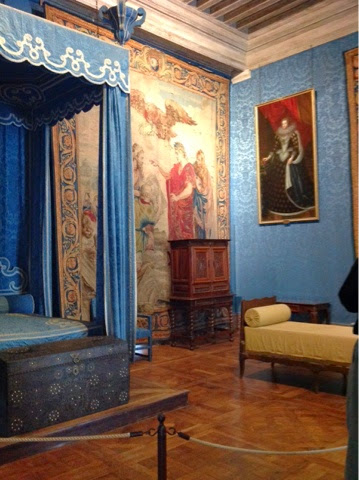 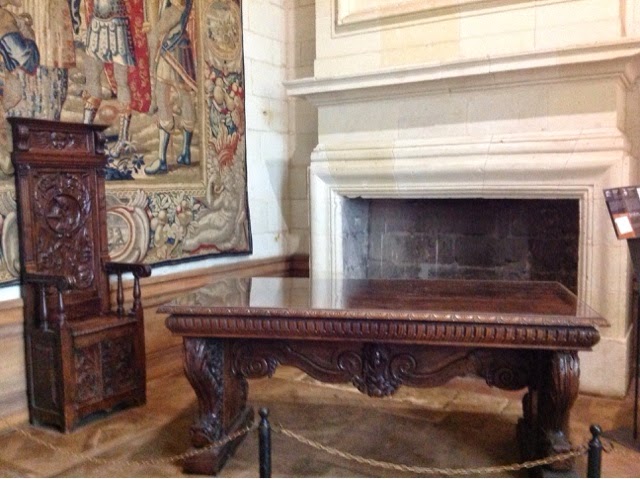 This walls of this room were lined with antlers. 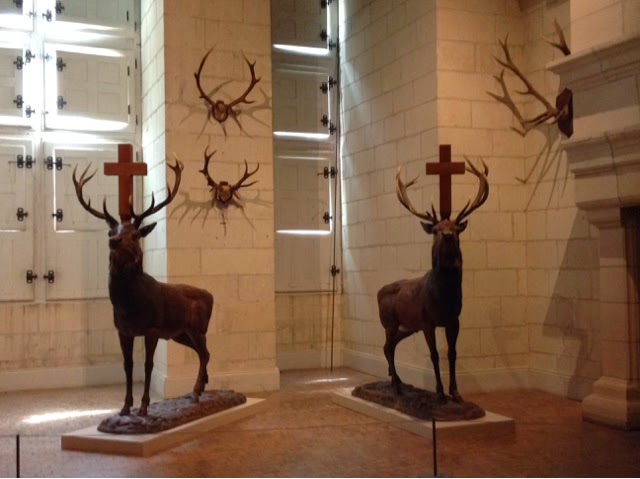 As well as tapestries with hunting scenes. 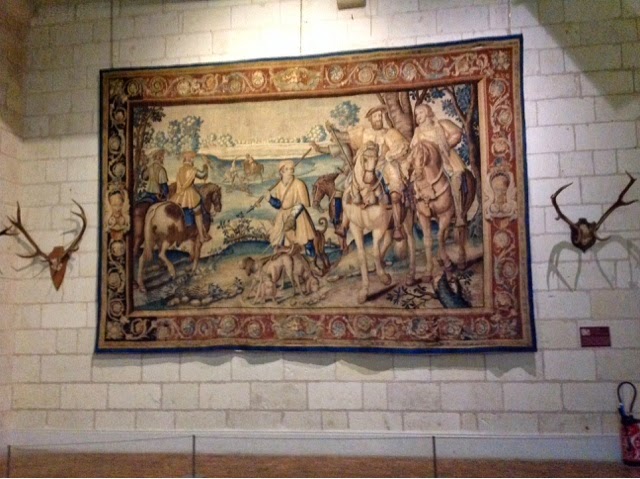 The château has a large inner courtyard. 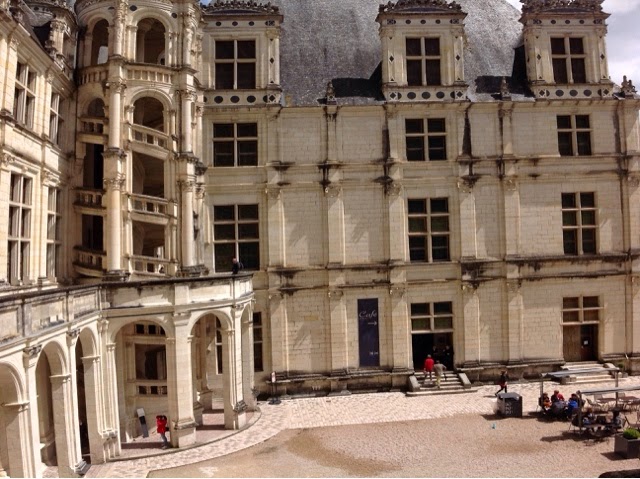 And there always seems to be a river close by. 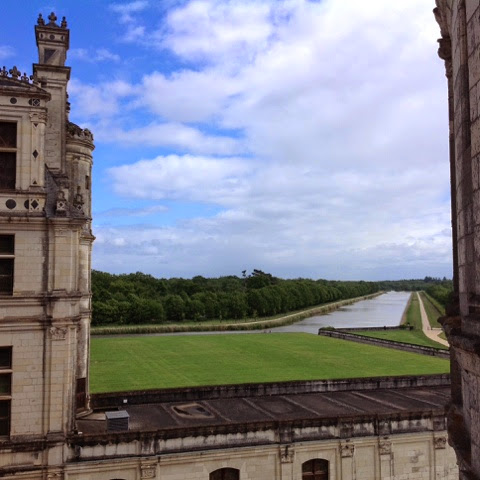 Here's a view of the château from the other side of the river, which I swiped from the Net...pretty impressive and so much better than the one I took (plus no renovation scaffolding). 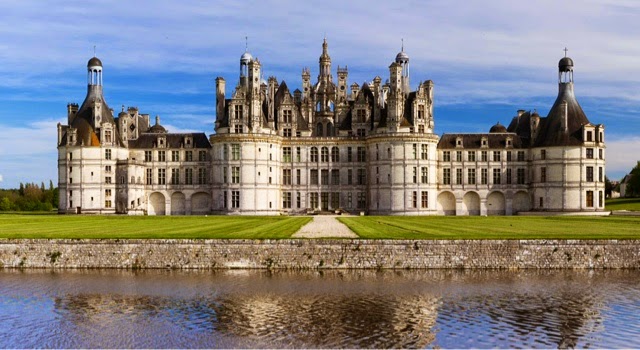 I was planning to visit another château near this one, but it started raining really hard and I got caught in a downpour without an umbrella or raincoat.  These castles aren't heated and they're quite cold inside, so I decided to catch the mid-afternoon train back to Tours.
I didn't do much sightseeing in Tours.  There's an old cathedral there. 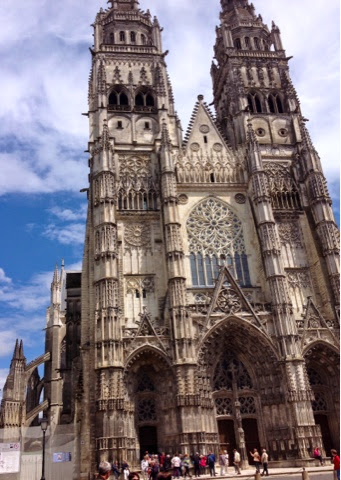 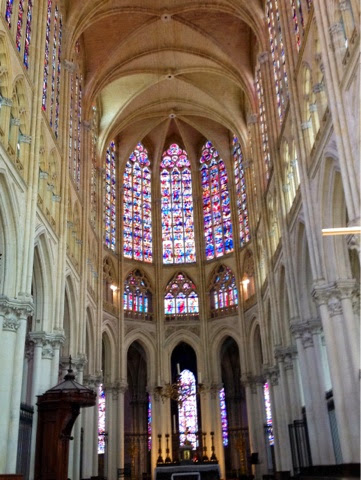 And I visited a nice little art museum.  I read three or four books and rested a lot.
Posted by Unknown at 9:41 AM