A CITY TO LOVE

Traveling around southern Spain by bus or train is a bit boring.  The majority of the countryside looks like this. 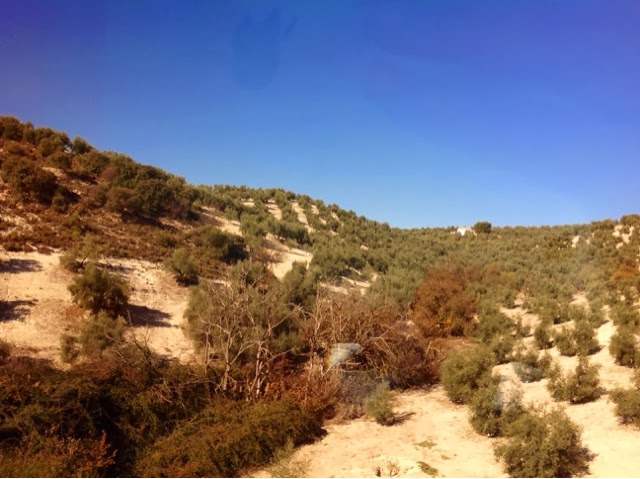 There are miles and miles of olive orchards and these scrubby little bushes that are obviously cultivated in rows--maybe baby olives trees.  The Spanish olives and olive oil are wonderful, and almost every restaurant and tapas bar gives you free olives to munch on while you contemplate how many and which tapas you'll have.
When I arrived in Sevilla, there was a religious festival of some kind underway.  In Italy, it's easy to tell if it's a religious festival because they parade around with a religious figure on a platform, and there are usually priests leading the procession.  Here, it was a succession of marching bands. 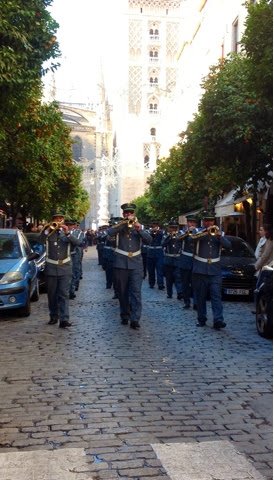 One after another, mostly all young people....it seemed as if they bused in every school marching band in southern Spain.  It was a weekend of bands marching around the streets and lots of people milling around.  These were some of the older band members. 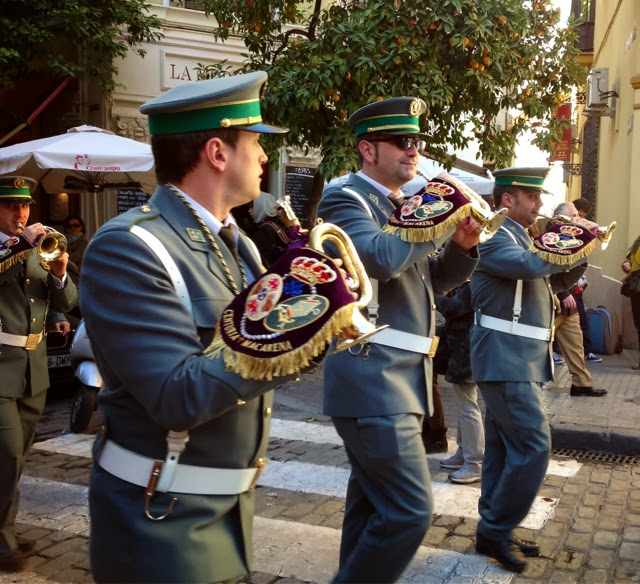 I fell in love with Sevilla almost immediately.  It has a positive and contagious energy, and there are lots of things to do and see.  My little boutique hotel was in the old Jewish Quarter, an ideal spot for walking to all the significant sites.  The maze of streets in this area are really narrow, and it's very easy to get lost, but you just don't care if you do, because you're sure to bump into something interesting.  This was my street. 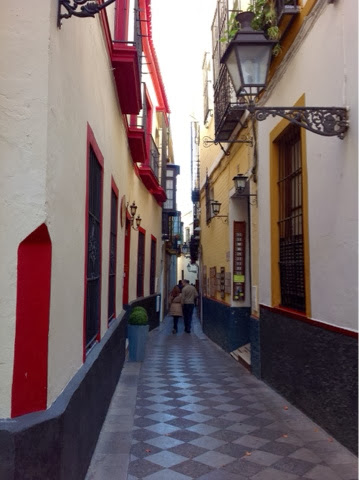 Besides the Cathedral and the Royal Alcazars, which needed their separate blog entries, I visited several other spots worthy of note.  Built in the 1920's when Sevilla hosted the Ibero-American World's Fair, Plaza de España is a huge half-circle of buildings in the Renaissance Revival style of architecture.  My camera couldn't capture its breadth, so only by courtesy of the Internet can I share it in its entirety.

Around the front of the buildings are these beautiful alcoves representing all the 50 provinces of Spain. 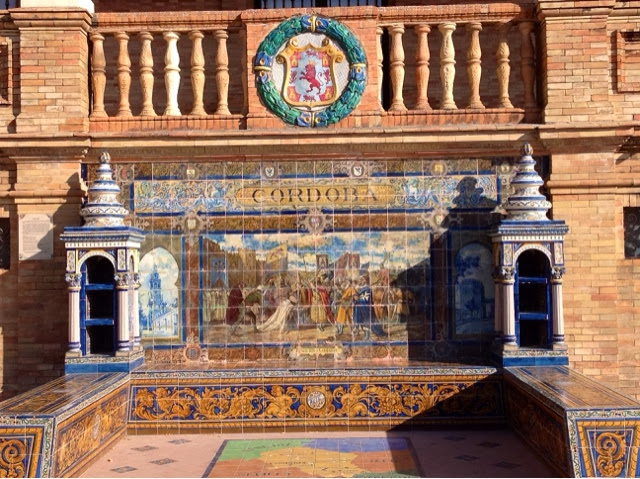 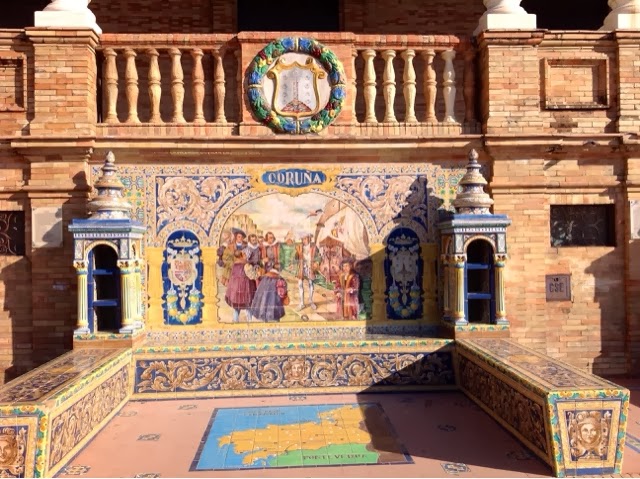 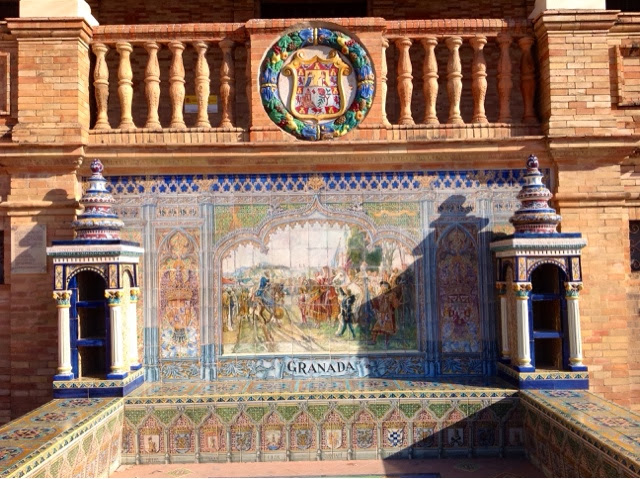 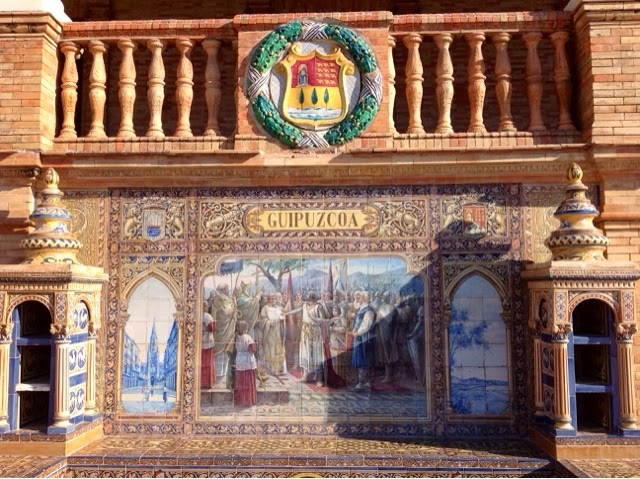 There was a moat along the front with bridges across representing the four ancient kingdoms of Spain.  You can float in a boat if you want, although there isn't much distance to row.  Across the street is a large city park where you can walk, run, bicycle, or bird watch.  There was a lot of happy chirping to be heard when I walked through. 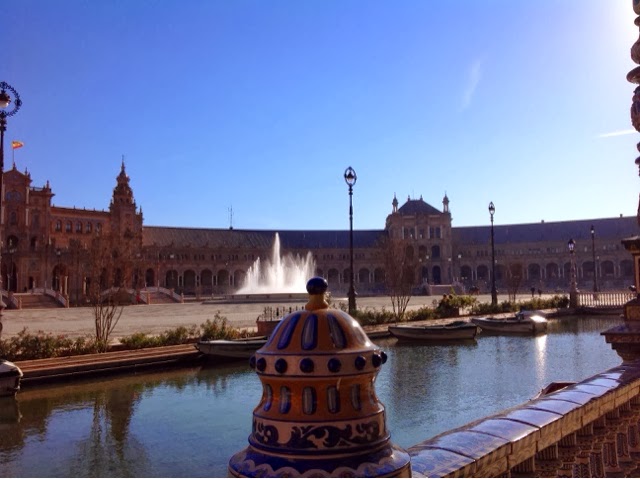 There were so many beautiful photo ops here, it was hard to choose the ones to share.  This is a favorite, because it must be obvious by now that I love arches. 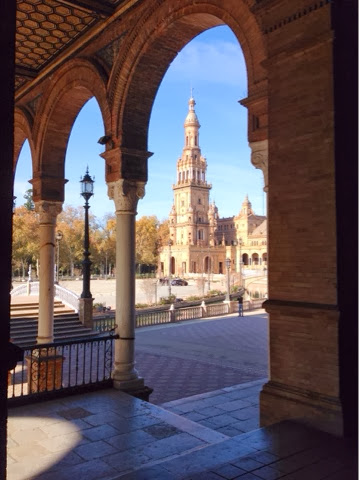 Sevilla is only 50 miles from the Atlantic and is the only river port in Spain.  The Guadalquivir River runs through it, and there's a nice river walk if you're so inclined, and I was. 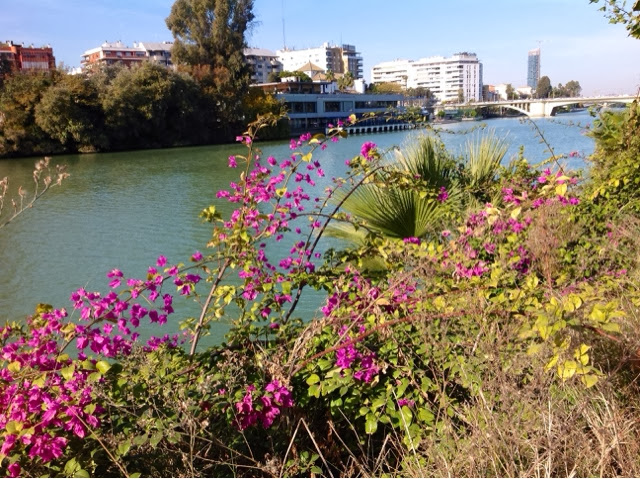 In the midst of an ancient city with a rich history, there is the Metropol Parasol, a very modern wooden structure that looks like 6 mushroom caps and cost the city 100 million euros.  That's over $200,000 a cap.  You could buy a lot of truffles with that and be much more satisfied!   It opened in 2011 (available for climbing), pretty bad timing considering Spain's severe economic crisis, and you can bet that it's a topic of great controversy among the natives.  It was intended to draw tourists to a part of the city that was declining. 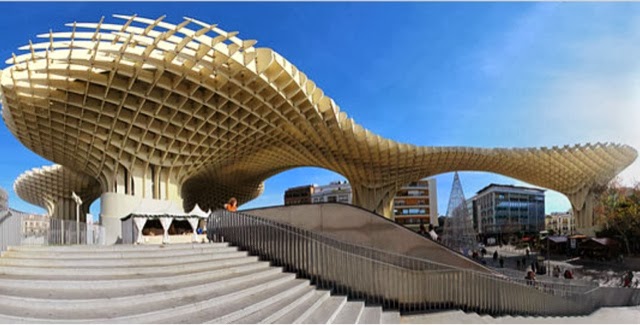 This is just one of the beautiful hotels that I couldn't afford.  King Alfonso XIII ordered its construction to house VIP guests of the 1928 Ibero-American Exposition.  The least expensive room is $240 a night, or you can rent the Royal Suite for $2,650.   Coincidentally, later in the day I took this photo, I met a couple of American men who treated themselves to a night here. 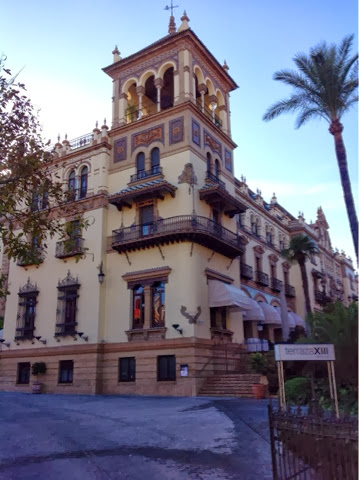 There are more hansom cabs in Sevilla than I've seen anywhere else in southern Spain.  They congregate around the plaza where both the cathedral and the alcazar are. 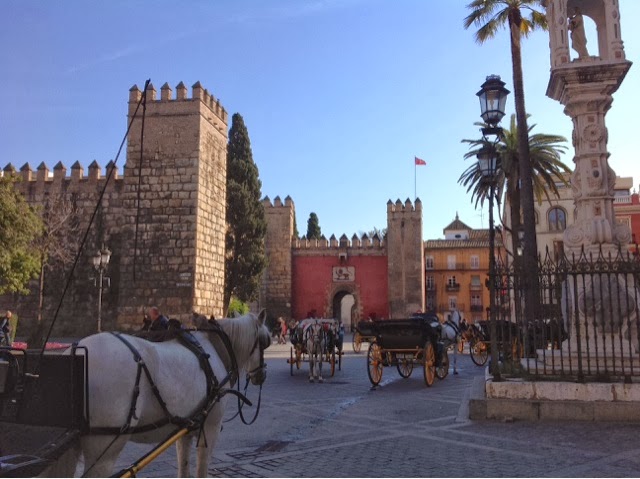 Another very interesting place to tour is the Hospital de los Venerables.  It's a 17th century Baroque building, consisting of a one nave church and a residence that was originally used to house elderly, poor, or disabled priests.  This painting captures the patrons tending to the infirm residents, 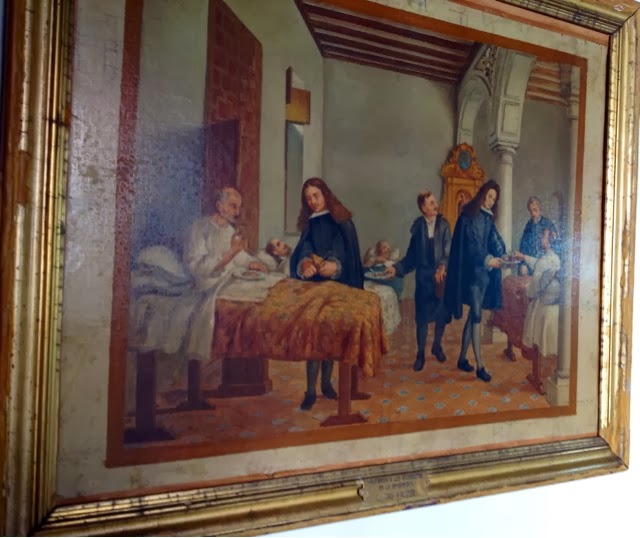 There is a simple but lovely courtyard at the center of the complex. 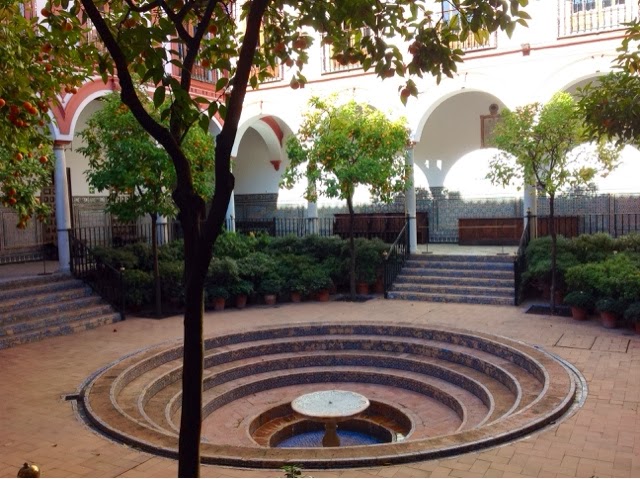 There was some beautiful tilework in the courtyard area. 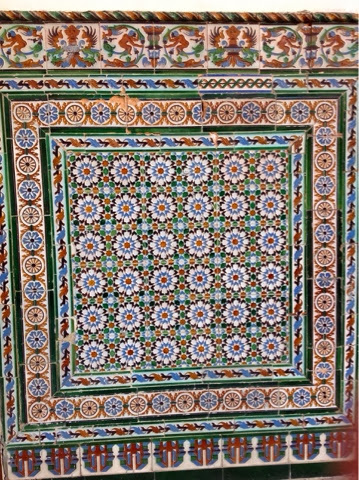 And through an arch next to it was this lovely garden area that was holding onto some of its summer color. 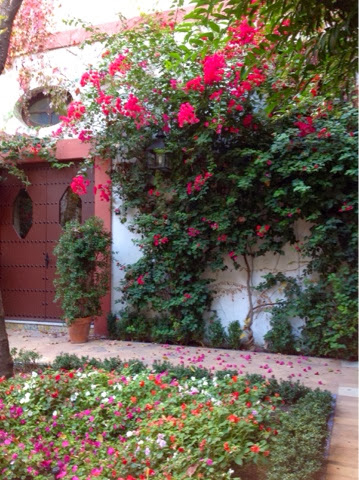 The small church was an eye feast. 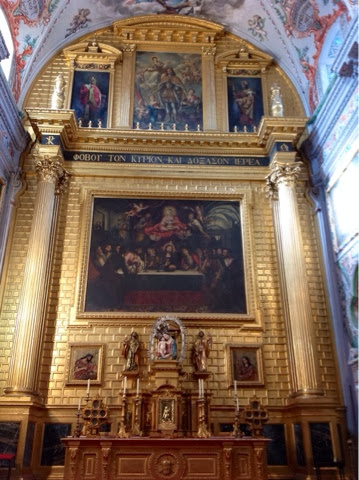 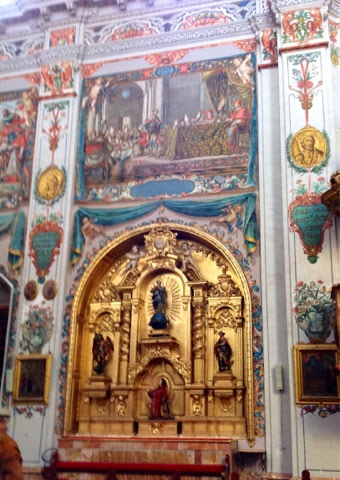 Up these stairs was a wonderful exhibit of Islamic art, and the excellent audio guide provided me with a great education about light in art and science. 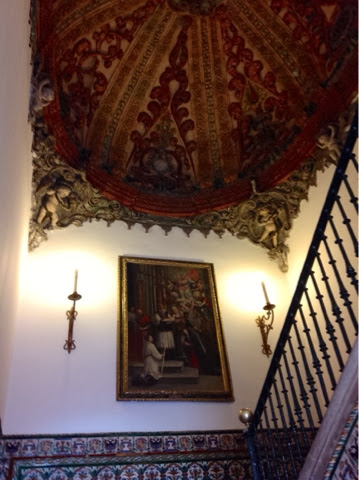 There was also a permanent art collection owned by the foundation that is now headquartered in this building, which regularly sponsors special art exhibits.
On the way back to the hotel, I couldn't resist taking a photograph of these niños who were sitting in the doorway of a shop, chattering away, while their mothers were inside chattering with the shopkeeper. 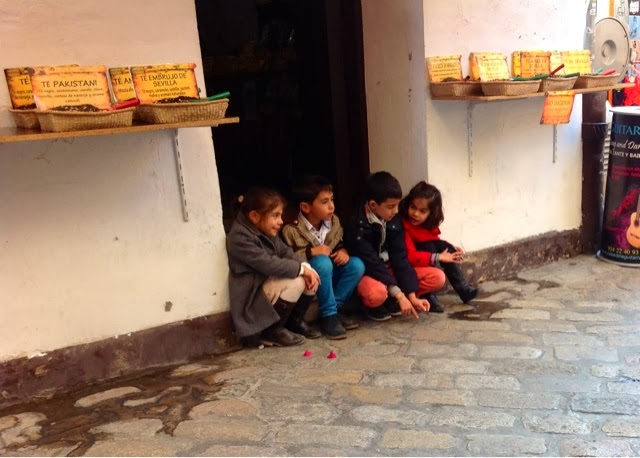 They were so absorbed in conversation that they didn't even notice me taking their picture.
Maybe now you're a little in love with Sevilla, too?
Posted by Unknown at 12:05 PM