SOAKING IN THE FLORENTINE CULTURE

I stayed in town this weekend.  I had tickets on Saturday to hear a chamber music concert at Teatro delle Pergola.  I got a little lost, so was a little late, and forgot to pick up a program, so I can't tell you the name of the ensemble or what I heard.  What I can say is that there were 4 violins and two cellos, and the music was beautiful, and so was the theater. 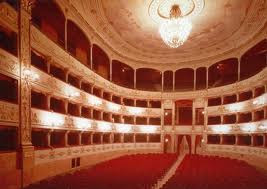 I was wishing I could sit in one of those boxes because they just look so elegant.

Today I spent close to five hours wandering through several museums in the enormous Palazzo Pitti.  The palace is the former residence of the Medici family.  Before they bought it, Luca Pitti, a Florentine banker, owned it.
It doesn't look that beautiful on the outside, but the inside is unbelievable.  In addition to the several museums housed in the palace, there's a huge beautiful garden behind it, which is loaded with statuary.  It's the largest museum complex in Florence.  I bought a ticket that got me into three of the museums.  The first was the Palatine Gallery, which exhibits more than 500 Renaissance art works and many of the palaces furnishings and frescoes from the 16th century through the 19th century. 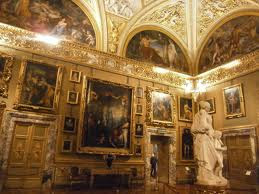 You couldn't take photographs, of course, but these borrowed ones will give you an idea of the elegance of the several rooms in the Palatine Gallery. 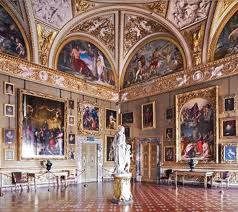 Besides being chock full of Renaissance art, every ceiling was a masterpiece; most had a central fresco and several lunettes.  Roman gods conveying power to the Medicis were the subject of some.  Hercules was also featured in several. 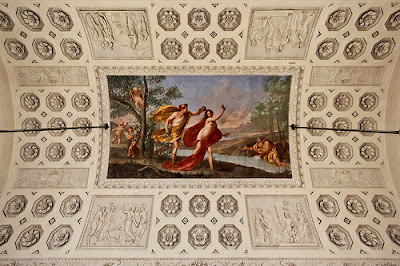 This is a relatively simple example of a ceiling fresco. 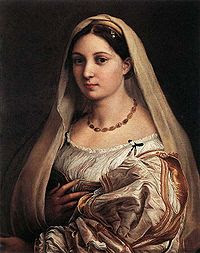 Raphael's La Donna Velata (Woman with a Veil) is among the more valuable pieces in this collection of art.

Caravaggi's Sleeping Cupid is another. 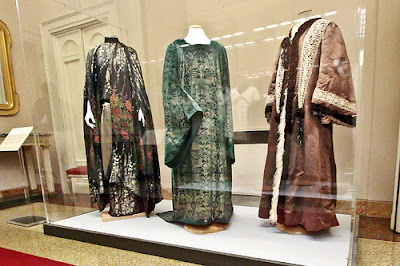 My ticket also got me entry to the Costume Museum.  The display is 98% women's clothing, mostly evening gowns from the 16th through the 20th century.

I spent at least two hours in the Gallery of Modern Art, and I must say I was pretty excited to see some secular art.  There were 30 rooms of paintings, statuary, clocks, and some furniture, all displayed in beautifully appointed surroundings.
Besides the Boboli Gardens behind the palace, you can also tour the Royal Apartments, a Silver Museum, and a Porcelain Museum.  Palazzo Pitti is quite a grand place.
After 5 hours, I felt a deserved a gelato--strawberry and pistachio isn't such a great pairing tastewise, but it sure looked pretty.