After the boat cruise on Doubtful Sound, I spent the afternoon driving through the countryside to an area called "The Catlins", where I would be spending just one night.  The Catlins features a scenic coastline and a dense rainforest, which harbors many endangered species of birds, as well as marine life and thousands of sheep, but not that many people.  There are only about 1,200 people living in a 720 square mile area.
The terrain I traveled to the Catlins was quite different from the West Coast with its rugged mountains.  It was all rolling brown hills dotted with sheep.  I didn't stop for photos because I wanted to get to the place I was staying as soon as possible.  And here's why. 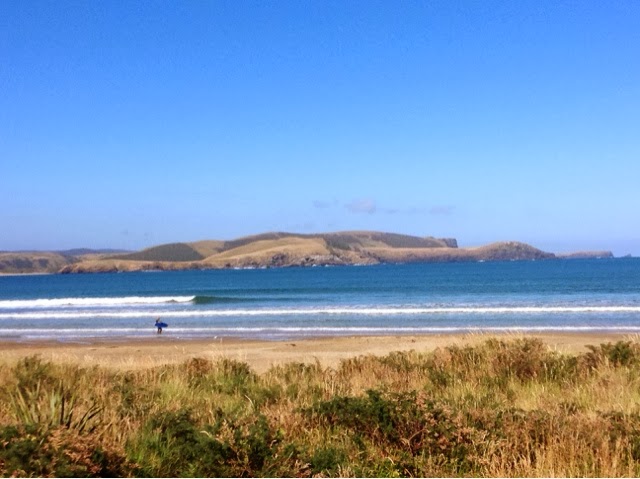 This was the view from my bedroom! 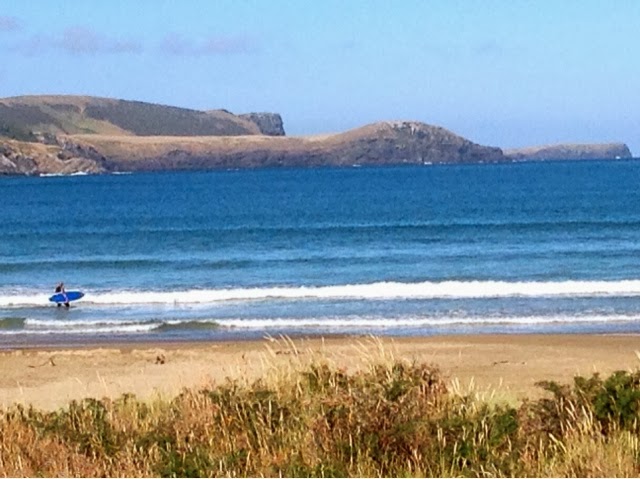 This entire house was devoted to travelers.....with three bedrooms and shared living room, kitchen and dining room.  Only two of the bedrooms were occupied that night.  My housemate was a very mature and intelligent 21-year-old Australian named Oliver.  I took a long walk on the beach after arriving, hoping to see the rare yellow-eyed penguin, sea lions, or seals, but there was nothing.  I talked with a couple of natives who were sheep farmers about how it is to live in such a sparsely populated area, as well as a bit about sheep farming.
I met Oliver later and he said he had seen a sea lion on his beach walk....luckier than me.  The next morning, Oliver claimed to see some seals playing in the waves, so I ran down to the beach, but his eyes must have been playing tricks on him, because there were no seals.  Unfortunately, I had to leave, and, at Oliver's suggestion, I made a detour to Nugget Point where he said I could be sure to see some seals and maybe penguins.  The drive went along the coastline for a while.  These cows certainly have a gorgeous view. 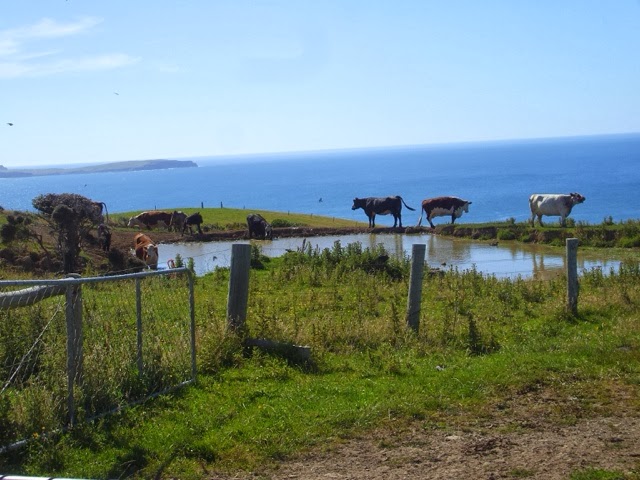 Then the road turned inland through beautiful rolling green hills. 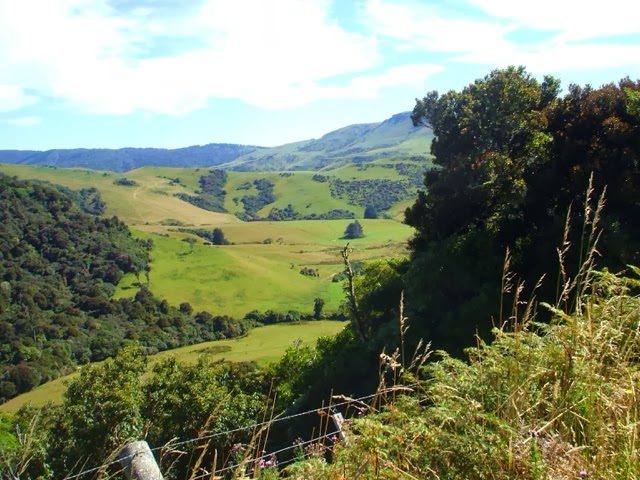 And many of the hills were dotted with sheep as far as the eye could see. 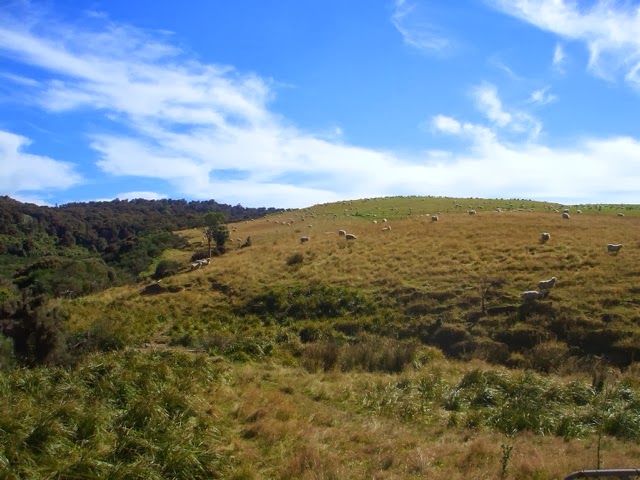 There were seals at Nugget Point, but you needed binoculars to see them. They are just tiny black dots in this photo. 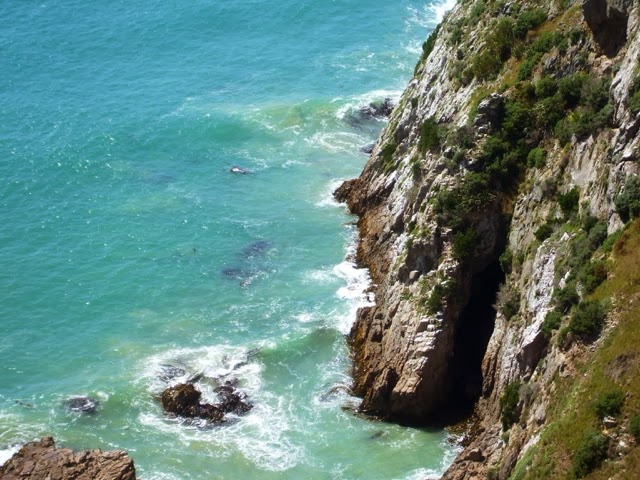 I drove the scenic route from Nugget Point to Dunedin, the second largest city on the South Island.  The road was almost on the beach for much of the way, and I stopped a couple of times to enjoy deserted beaches. 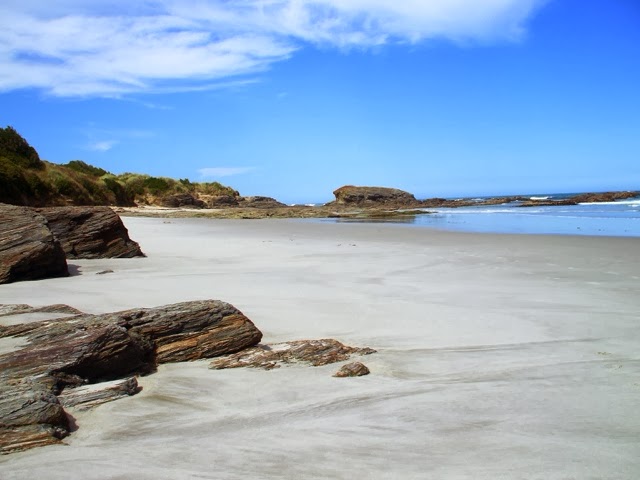 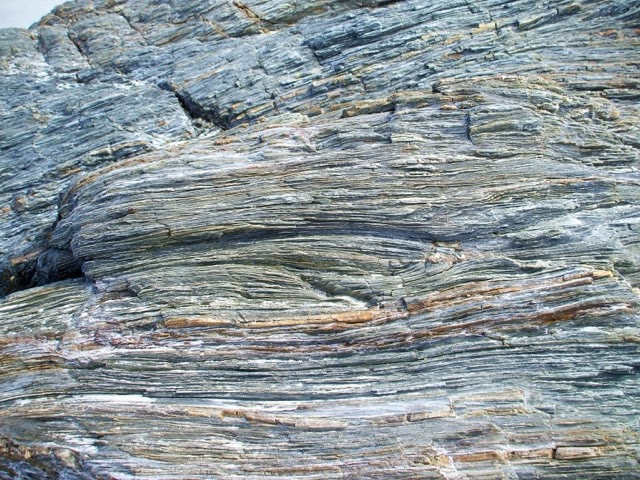 Dunedin seemed like a huge metropolis compared to the dots of towns I'd passed through in a blink on the way.  I think if there are 10 houses close together here, you have a town.  I had to pay close attention to my driving--there are even stoplights here.  Thanks to my GPS, I found the place I'm staying with no trouble.  It's up in the hills overlooking Central Dunedin.  I'm in a little studio apartment that has to share bathroom facilities with another room, but no one else is booked, so I've got the place to myself.  I went downtown last night and poked around for an hour, then decided to go to a movie...The Railway Man.  Pretty good.
Today, I toured Lanarch Castle and its grounds, which is on the Otaga Peninsula. 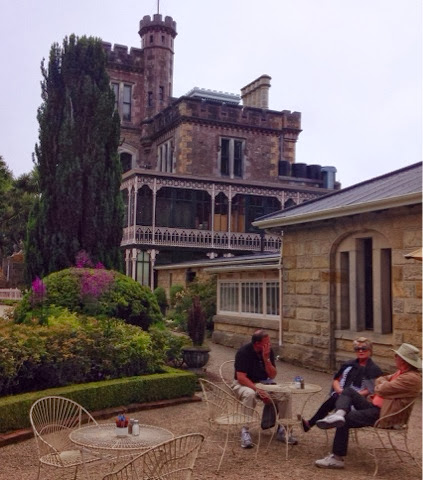 It was a pretty gray day when I arrived, so there are no spectacular photos of the mountaintop view on my camera.  The entrance to the castle was guarded by some eroded, but fierce statuary. 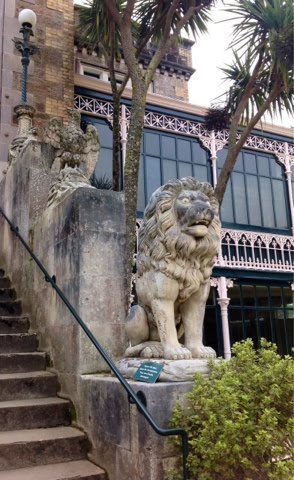 This is a fairly modest castle, with a tragic history that includes the early death of the owner's first two wives, the suicides of the owner and his only son, and a lengthy legal battle between the owner's third wife and his children by the first two.  It's also said to be haunted by the owner's first wife.
The grounds had beautiful flower gardens, and I share these summer beauties with my Michigan friends who may wonder if they'll ever see summer colors again. 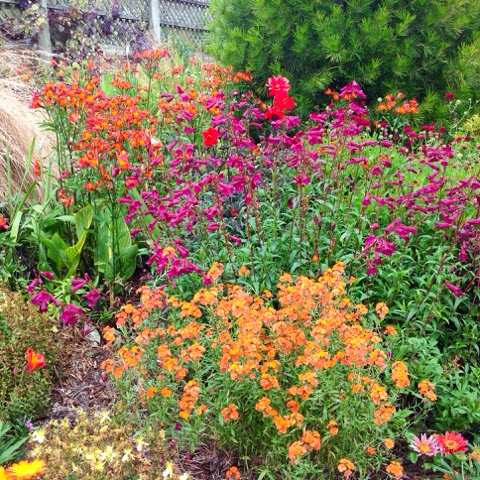 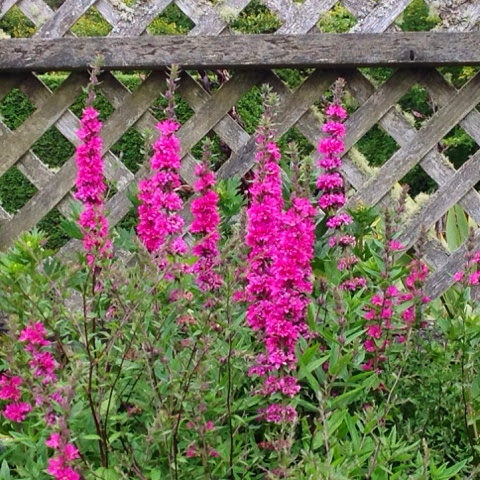 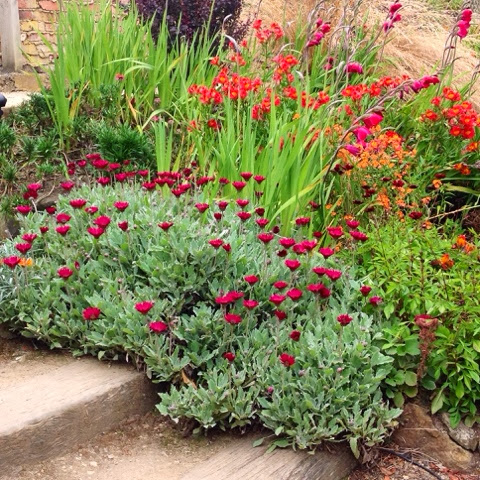 And here's one lovely Monarch. 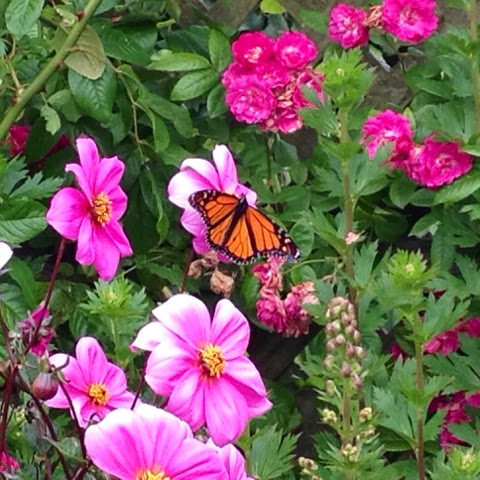 I toured the inside of the castle also, but there was nothing as stunning there.
I continued on from the castle to take a boat cruise where, again, I hoped to see some wildlife.  We did see several young albatross soaring in from the sea.  And we saw seals, but they were too far away to photograph.  The crew claimed there was a blue penguin surfaced on the water near the boat, although I couldn't see it.  But the albatross were fun to watch.

I had hoped to see more of Dunedin...there are some beautiful buildings I've driven by that I'd like to find again and photograph, but I have a 5-hour drive tomorrow to Akaroa, southeast of Christchurch, so I need to leave in the morning.  I've wanted to linger everywhere on this beautiful island.  It's a little piece of paradise.
Posted by Unknown at 10:10 PM