I love big old trees.  I often stop just to take in their grandeur and wonder about how much life they've seen go by or what conversations they've heard beneath their branches.  I particularly like old trees that have trunks with "character".  Here in Australia, I've fallen in love with fig trees.  There are several varieties of them here, and I've taken lots of photos of the older ones with their twiny buttressed trunks. 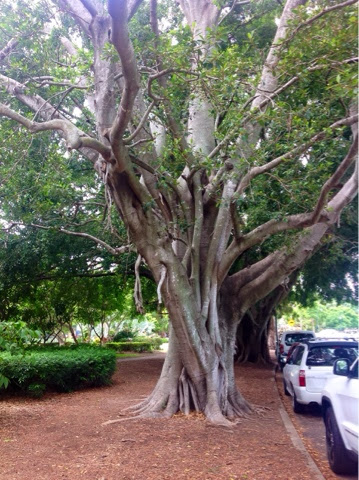 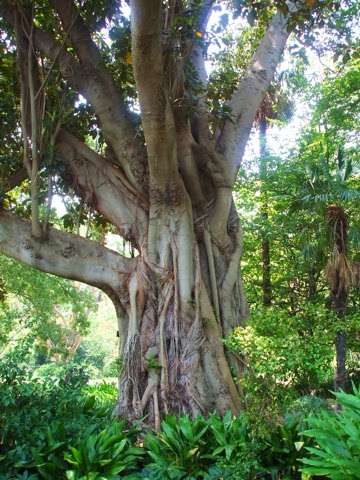 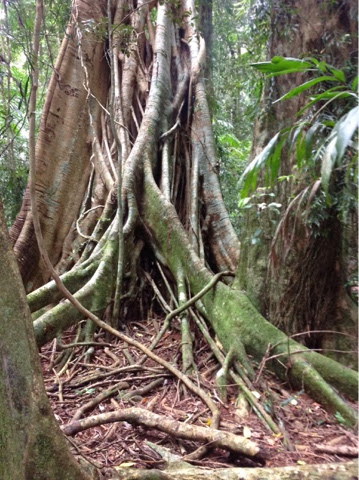 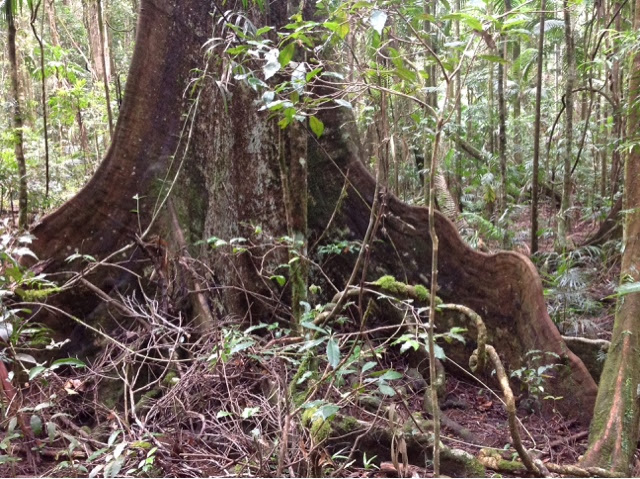 In Brisbane, I was fortunate to have as tour guides a couple who I met in Sorrento, Italy.  They rented an apartment next to mine for a week and we enjoyed some time together there.  For those who folllow my blog, you might remember Diana and Paul. 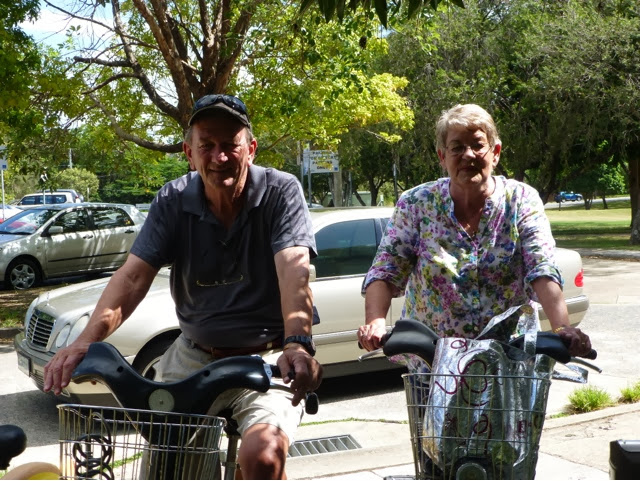 I spent a couple of days with Di, who is as knowledgeable about Brisbane as any tour guide you might hire.  And besides that, she knows the name of just about any tree, plant, flower, bird, or animal you might encounter along the way.  She showed me this ultimate in fig trees, one that spawns aerial roots that gradually swell into columnar branches.  The common name for this variety is the strangler fig. 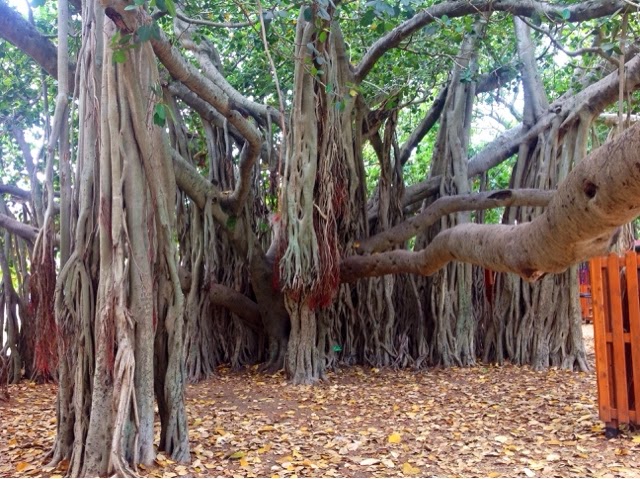 Okay, enough about my fascination with fig trees.
Di took me for a ride on a "CityCat" on the Brisbane River our first day together. 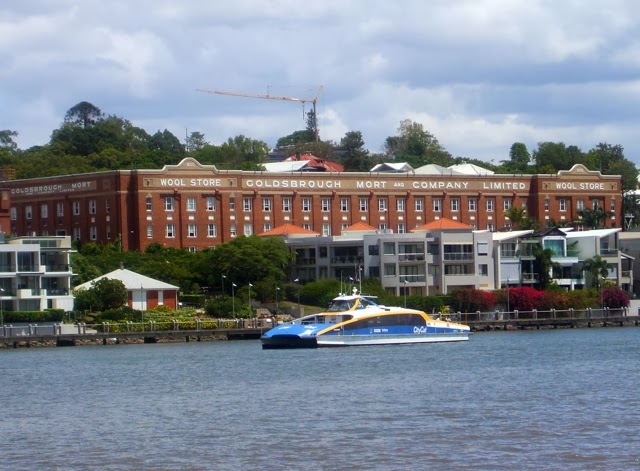 The river winds its way through Brisbane like a snake, curving sharply one way then the opposite.  Di told me that you have to see Brisbane from the river to understand it.  I agree. 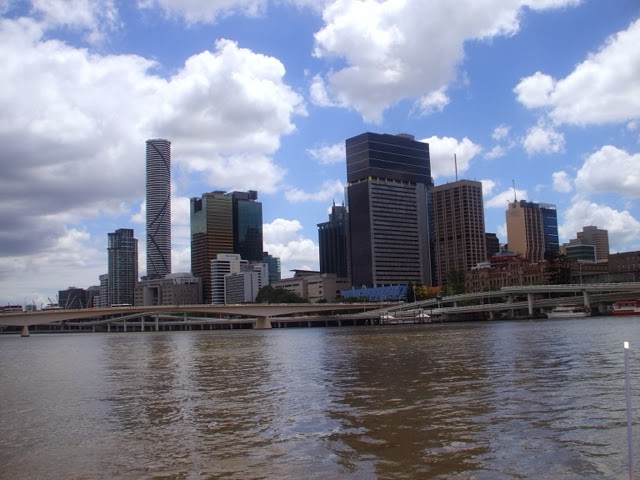 As you travel down the river, a building you saw on the right shifts later on to the left side.  It can be very disorienting.  See that tall round building on the left with the black stripes.  That building, the Infinity Tower, is the tallest in Brisbane and it became my reference point.  Di started refering to it as my building.  This aerial view of the city illustrates why a reference point is helpful.  Brisbane's population of over 2 million sprawls all along this winding river. 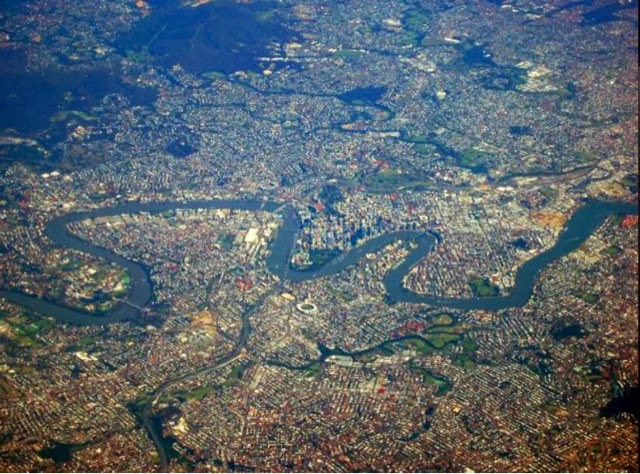 The South Bank is where tourists usually head.  It's where you find the museums and arts entertainment, as well as a slew of restaurants.  There's also a nice park where you can take a ride on this gigantic ferris wheel. 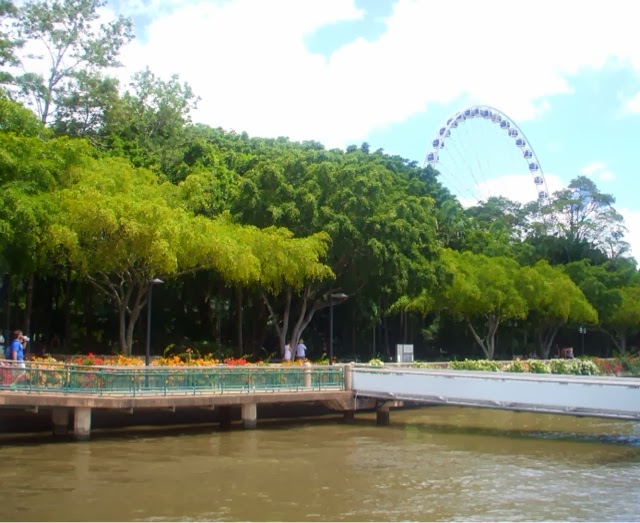 This is the Old Customs House. 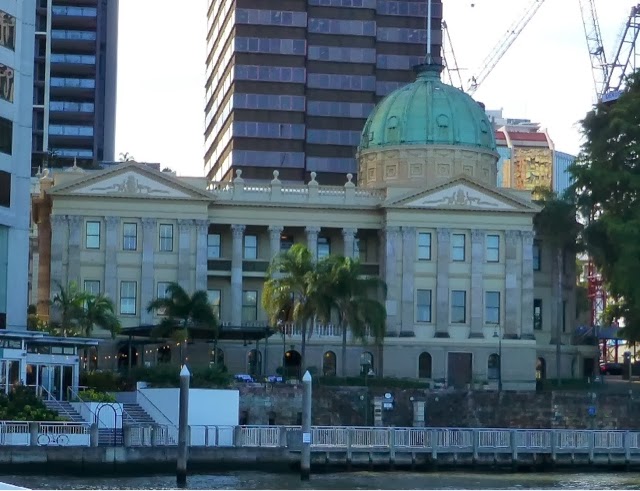 There are some beautiful houses perched over the river banks--this was a favorite. 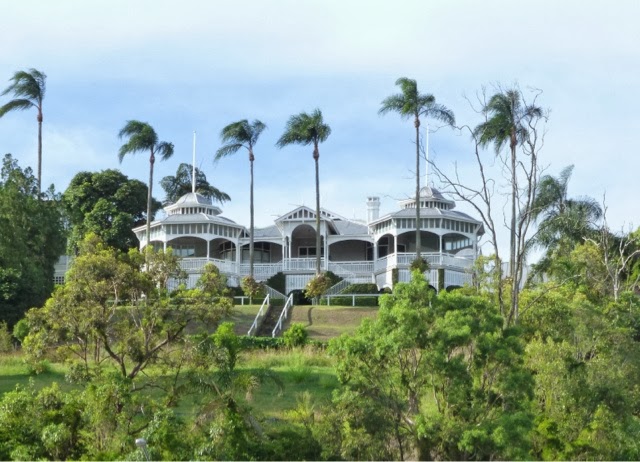 Along the way, Paul picked us up at a ferry stop to take us for a delicious lunch with copious amounts of wine.  I really like this picture of him. 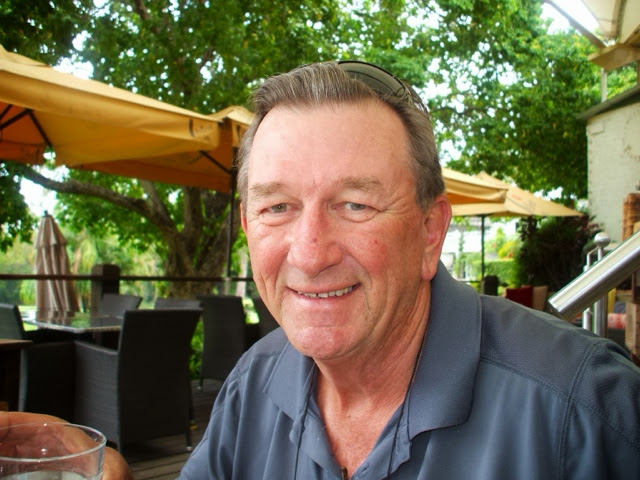 After this luxurious lunch, Di and I finished our boat ride and went to a park where I saw that strangler fig.  There were also some of the bottle trees, like the one I saw in that park in Cadiz, Spain. 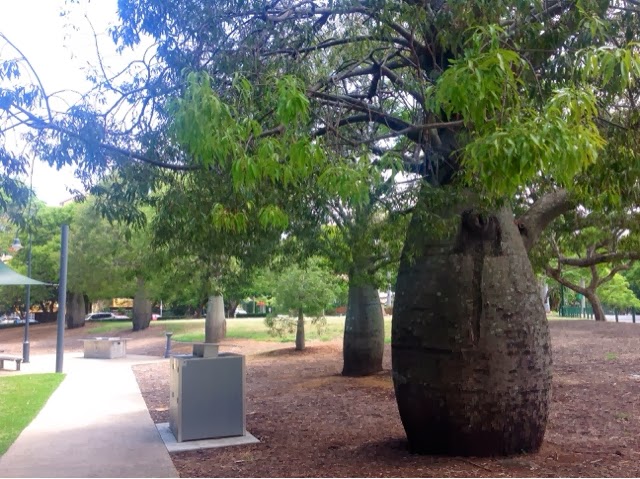 The next day, we went to see St. John's Cathedral, a neo-Gothic sandstone church built in the early 1900's. 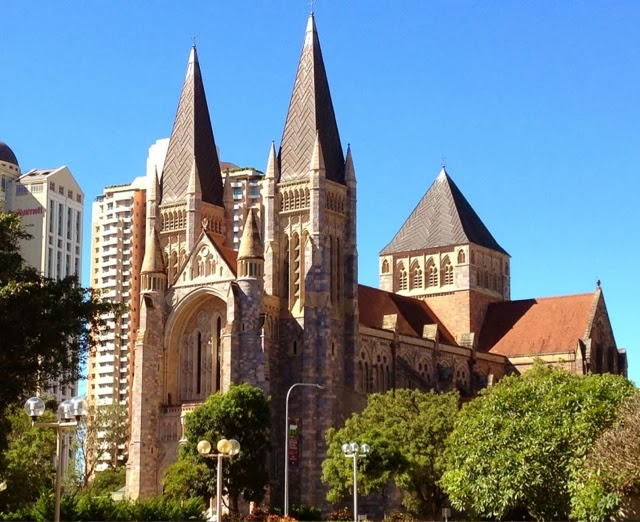 We also drove by a classic example of a multi-story Queensland style building, with its wraparound cast iron verandas, called "The People's Palace" by locals.  It was originally a "temperance hotel" where working class travelers could stay away from the evils of alcohol.  It's now a backpacker's hostel. 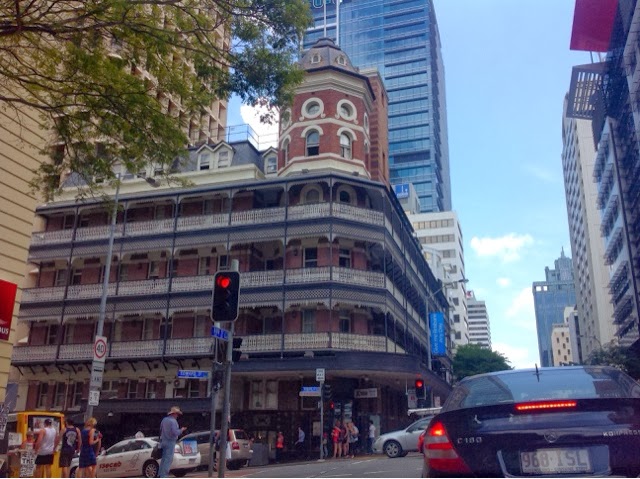 On my own, it's unlikely that I would have toured around the suburbs of Brisbane, but with Di as my guide, I had the pleasure of viewing some beautiful examples of Queenslander homes.  They are characterized by their unique features:  built on wooden stumps, verandas, iron steep-pitched roofs, and decorative trim in cast iron or timber.  Building the house on stumps allowed for cooling circulation of breezes under the house as well as easier adaptation to uneven ground. 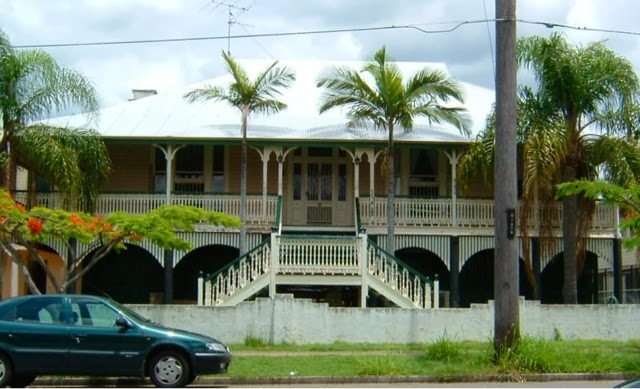 We drove up to the highest point in Brisbane, Mt. Coot-tha, to have lunch with a view. 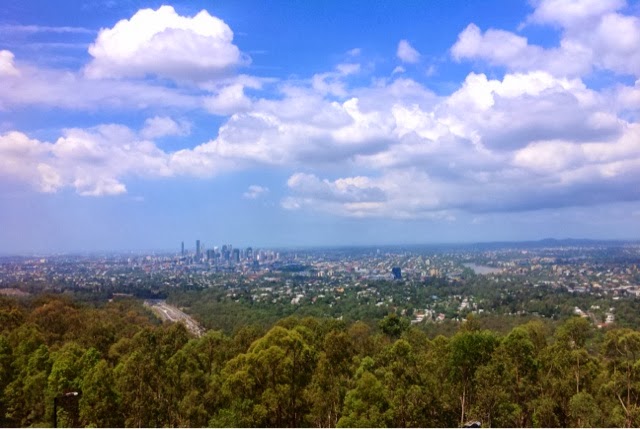 Then came a look at the Botanical Gardens.  This sculpted rose was unique and beautiful. 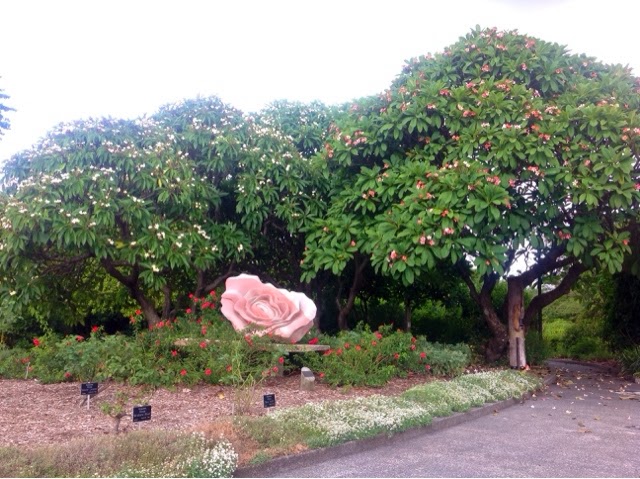 And there were more interesting trees.  This very unusual one is aptly called a sausage tree. 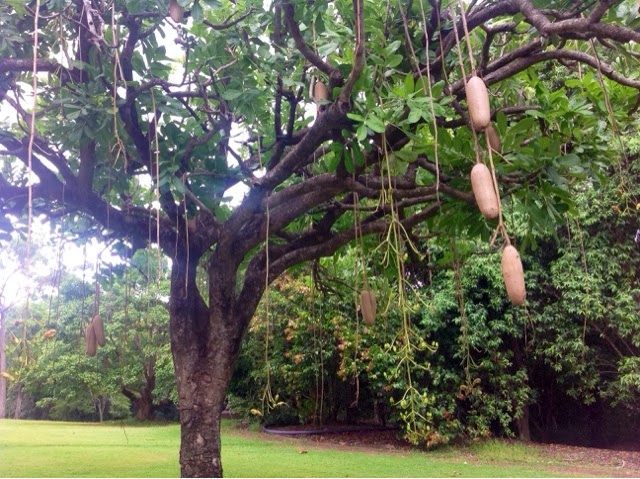 And here's an interesting pine with spindly branches and pine leaves only at the branch ends. 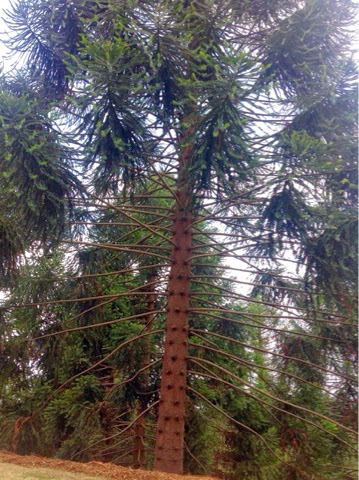 Back in the city, we drove by the oldest structure there, The Old Windmill, which was powered by either wind sails or convicts on a treadmill to grind wheat, back in the day when Brisbane was a penal settlement. 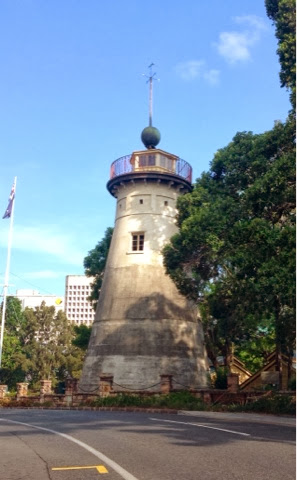 This lovely view of the city was from Kangaroo Point Cliffs. 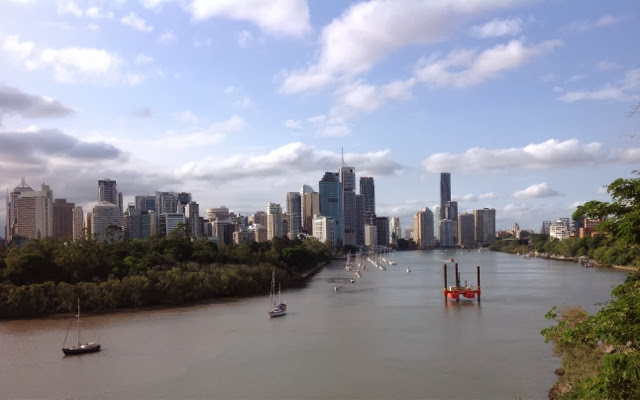 I went on my own the next day to the Art Gallery, then roamed around the South Bank for a few hours, enjoying some entertainment at an aboriginal festival and crafts market.  On my last day, Di and Paul took me for a drive to see the Glass Mountains and the Sunshine Coast.  It was a rainy gray day, so the mountain views were obscure but still beautiful in their foggy eerieness.  The aborigines created a very imaginative story about these mountains, but it's too long to recount here. 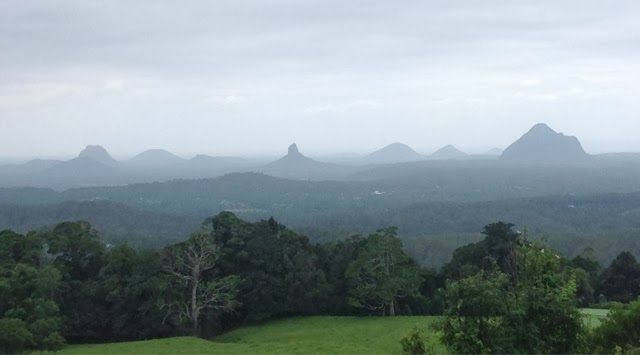 We stopped for a walk through a rain forest where Di had hoped I might hear the call of a catbird.  We didn't, but I was delighted to hear the call of the whipbird, which is a duet between the female and male whose call sounds like a whip cracking.
And, of course, more trees.  Here's an interesting species of the fabulous fig. 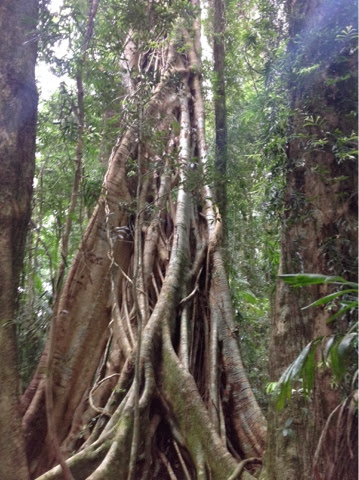 We headed for the coast, stopping first at the charming resort town of Noosa.  It would be stunning on a sunny day. 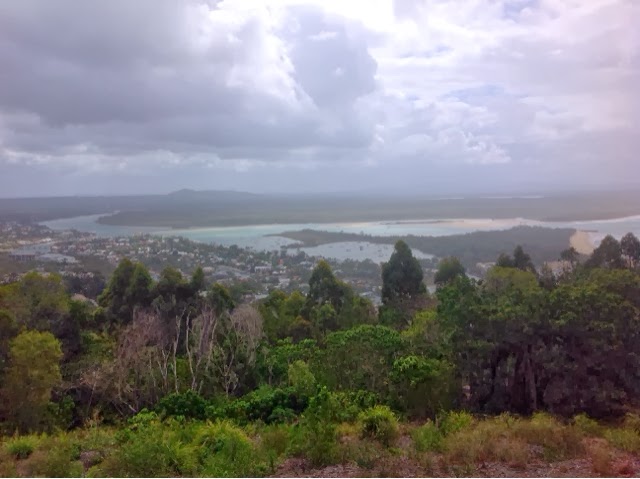 Next was Mooloolaba Beach, where we were graced by a bit of sun. 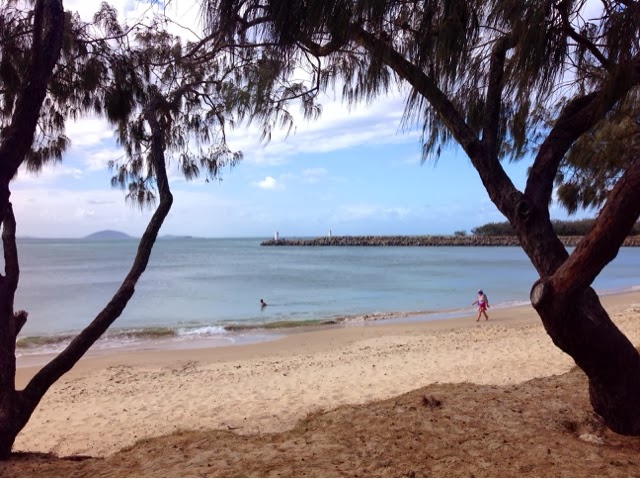 We particularly enjoyed watching the kitesurfers at Caloundra Beach.. 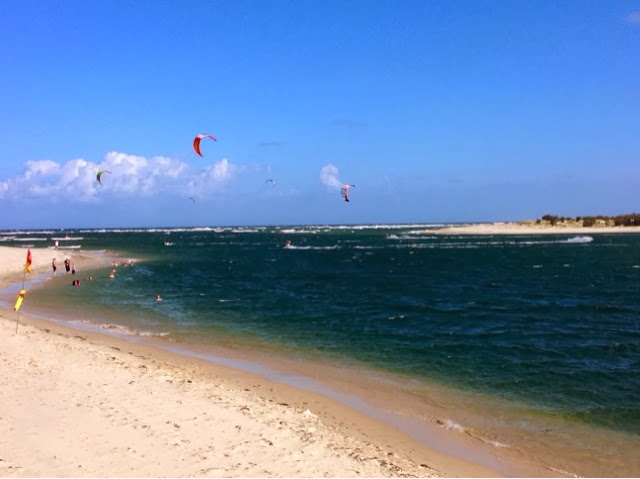 I'm very grateful to my friends, Di and Paul, for making my visit to Brisbane so enjoyable.  We'll be meeting again before my journey ends, because we're going to be in Paris during the same week in May!
Posted by Unknown at 3:27 PM