A SLICE OF PARADISE

Is there such a thing as overdosing on scenic wonders?  When it becomes a daily event, you begin to look for something that tops what you've already seen.  The East Coast of the South Island is very different from the West Coast and its rugged mountainous Alps.  Its mountains are gentle mounds and there was a stretch of road between Dunedin and Christchurch that was actually flat.  And along the road, where there was much more traffic than there was on the western side, there were several towns of greater size than I saw on the opposite side.  I was actually getting a little bored.  And then I turned east to the Banks Peninsula, where I was in search of Akaroa, a historic French and British settlement nestled in the heart of an ancient volcano.
These sheep provided a break from the monotony of the flats.  The farmer and his three dogs were moving them along the road from one pasture to another.  He was going to try to clear space on the road so I could pass, but I wasn't in a hurry, and it was fun to watch the dogs keeping them in formation.  I took a video, but I can't see how to post it.

The flats turned quickly into curvy roads that went up and down and all around the mountains you must cross to get to Akaroa.  In Maori, Akaroa means "long harbor", and this is the spectacular view you have when you reach the crest of the final mound and start heading downward to this town of 700 that swells significantly in the summer. 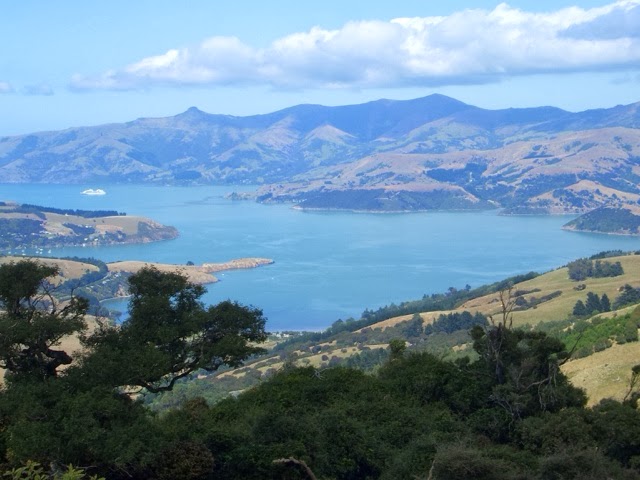 Yes, that's a cruise ship in the distance, and there were two that came in to "swell" the population.  I stayed at a lovely B&B that was the home of a gregarious older woman named Rosemary.  She has a beautiful garden in front of and all around her house. 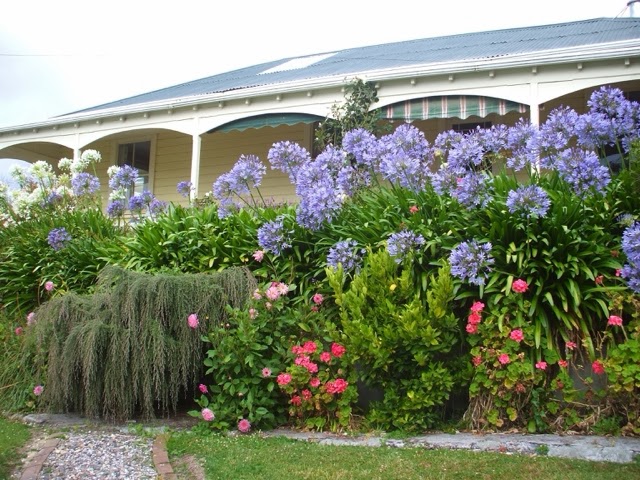 This was the view from my bedroom.  It was late afternoon and not a very beautiful day when I arrived, but the next morning the sun cooperated to light up the scene. 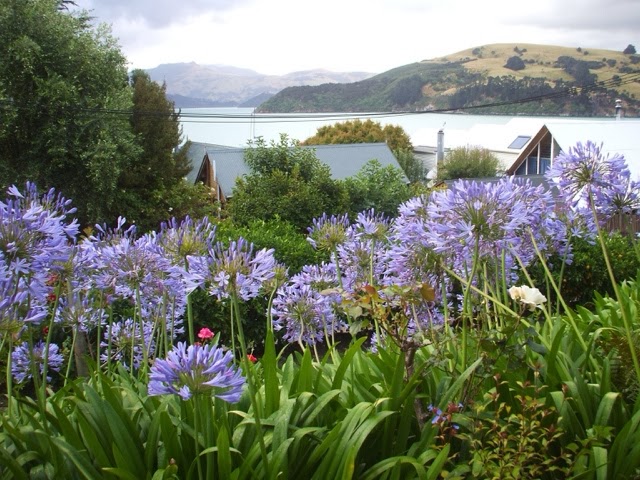 The town itself is small, but there's everything you need--small supermarket, pharmacy, bank, and lots of restaurants.  I walked into town for dinner and took some photos along the way.  I don't know what kind of tree this is, but I don't think we have it in the U.S. 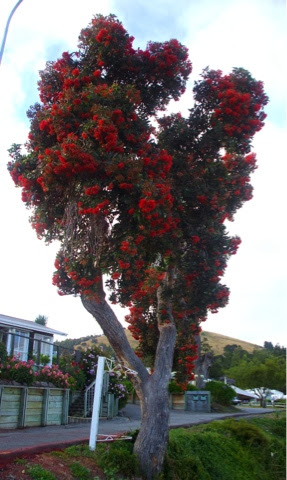 And there were more beautiful flowers along the way to town.  I don't know what these are either. 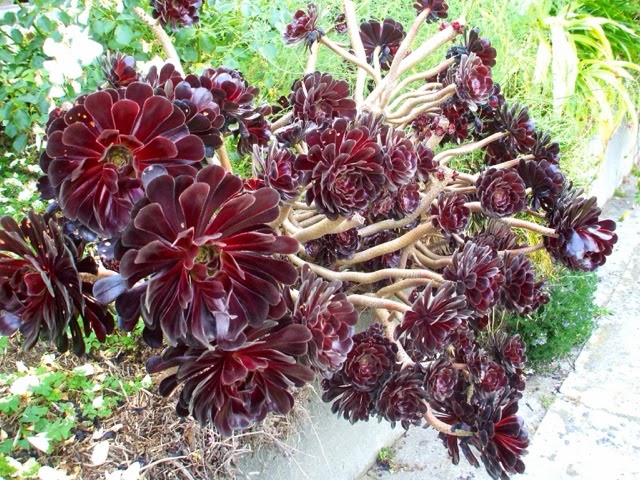 There are lots of gulls in the harbor, of course, and they can be quite aggressive, swooping down quite close to your head, but these guys were just chilling out. 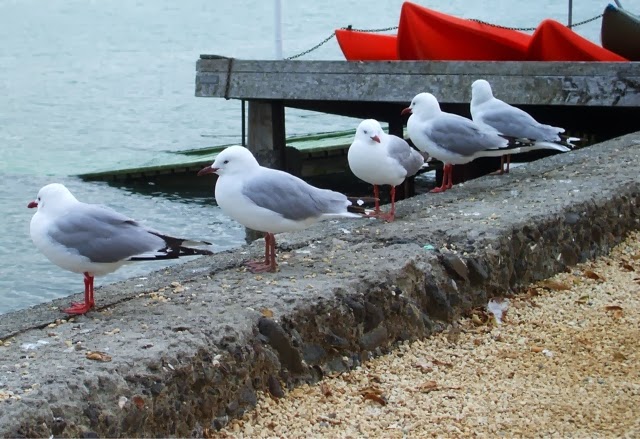 The pier with its bright blue-roofed buildings brightened the gray day. 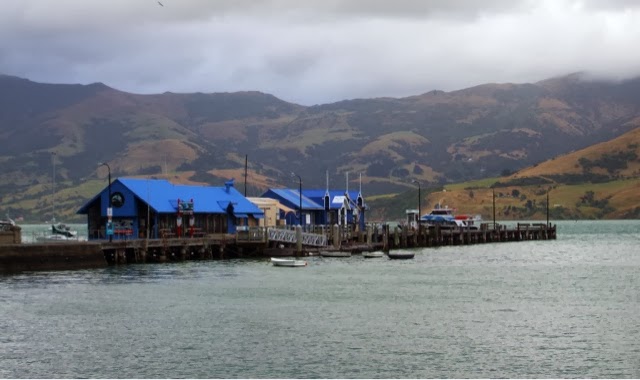 Rosemary told me about a celebration that was taking place the following day in a nearby bay, the commemoration of the signing of a treaty between the British and the Maori in 1840.  It is a national holiday.  She explained that Maoris would be arriving in their long boats to be greeted by British Naval Officers.  I decided this would be a great way to spend the morning before I drove to the Christchurch Airport to catch my plane to Melbourne.  The drive to the bay was along a very narrow road that went up and down and all around the hills, but provided some nice scenery. 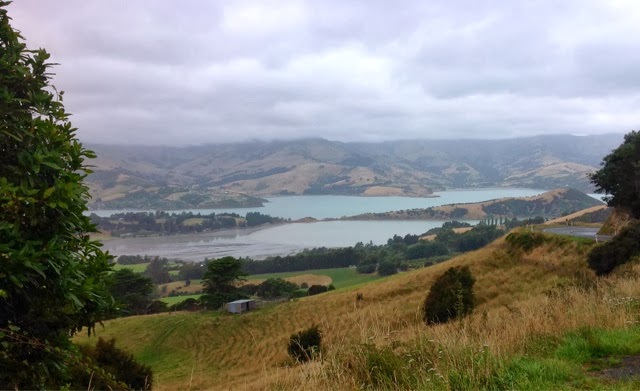 Unfortunately, Rosemary wanted cash for my room payment and I had to find an ATM before I left, which made me late for the ceremonial arrival of chanting Maori.  All I got were photographs of their long boats. 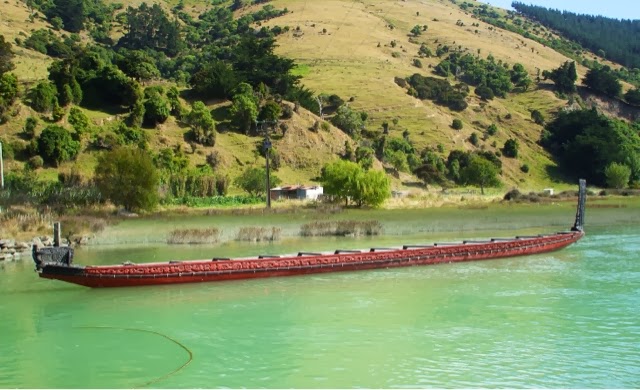 The Maori do beautiful wood carving on everything, including the bow and stern of their boats. There was a large crowd there of tourists and locals and after about 45 minutes, there was some kind of ceremony where a Maori spoke in Maori to the Naval Officers present for this part of the commemoration. 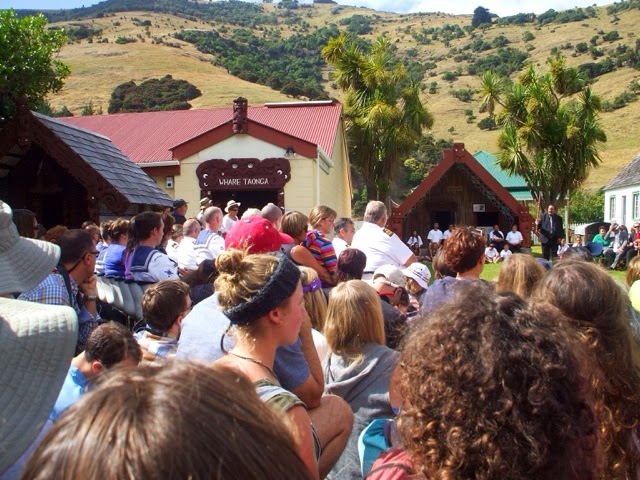 Again, I wished for more time to explore this amazing peninsula, but had to rush off to Christchurch.  I'm so happy I came to New Zealand, and now I understand why other travelers' faces lit up and smiled when remembering their time here.  It's an amazingly beautiful country with equally lovely people, and I could spend a lot of time here.  I also understand why Ruth Golden Gelman, the nomad who inspired my journey, lived here for a few years.  I reluctantly leave for my next adventure in Australia.
Posted by Unknown at 2:02 PM