WHAT VESUVIUS DID TO POMPEI

I came to Italy with big hopes—first, that I would be able to get a residence permit, which hope was quickly smashed.  The second was that I would share parts of this retirement adventure with good friends.  This hope has begun to be realized with a visit from one of my oldest (span of friendship years, not chronological) friends from my days on the west side of Michigan.

My friend Grace and I worked together at a hospital in Grand Rapids during the last century, three decades ago.  Grace had just enjoyed a cruise through the Mediterranean, starting in Barcelona and ending in Venice, before she winged her way to Naples and taxied into Sorrento to visit me.  I’m always delighted to spend time with Grace, because she’s so much fun and really easy to get along with.  We had traveled together to Cancun a few years ago, and I knew we would have a great time together here.

Of the many options for sightseeing here, Grace wanted to see Pompei, tour the Amalfi Coast, and go to Capri.  Grace arrived early afternoon last Friday, and we spent the rest of that day walking around Sorrento, enjoying a relaxed dinner, reviewing her cruise stops, and making plans for the next three days.  We chose to visit Pompei on Saturday, and this post will be devoted to our tour of this amazing city that was destroyed by the volcanic eruption of Mt. Vesuvius in 79 A.D.  This is the same Mt. Vesuvius that you see resting benignly across the Bay of Naples in pictures I posted earlier of the view from my apartment balcony.

These pictures give you an idea of what it’s like to walk the streets of this excavated marvel.  In some places, you can see the ruts made by the chariots: 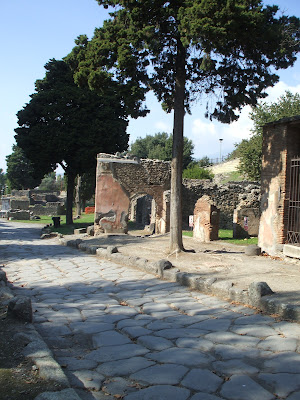 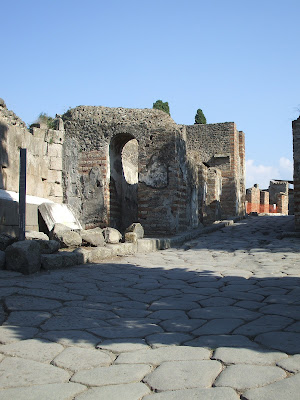 There are very few frescoes left here…most have been removed to the archeological museum in Naples.  Here’s one of the few that shows up decently in a photograph. 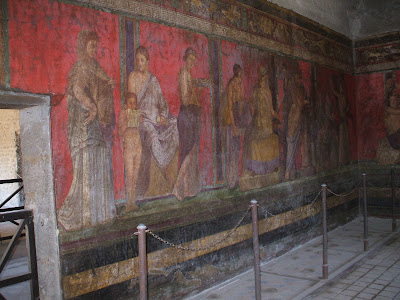 Here's the remains of the forum: 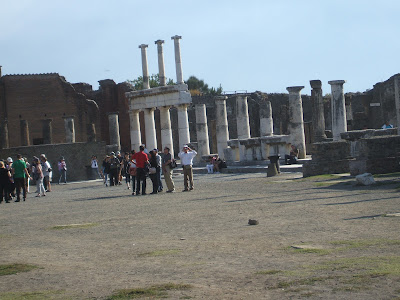 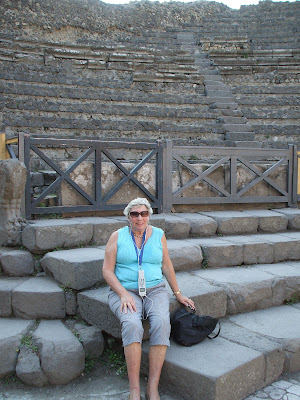 And here’s the large theater which seats about 5,000: 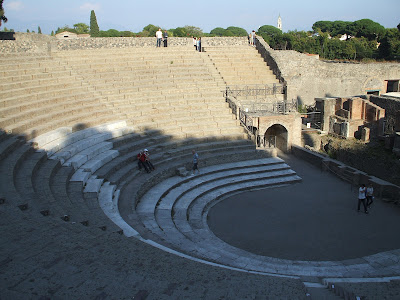 And the most amazing sight are the remains of people who lived here at the time of the disaster.  This one is the most expressive, I think, if you interpret this position as fetal: 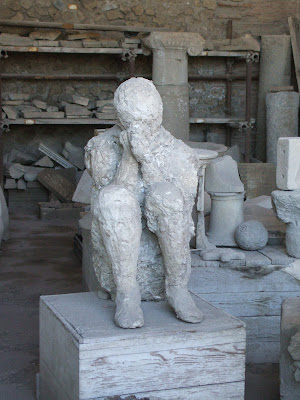 And here's another….can you believe it? 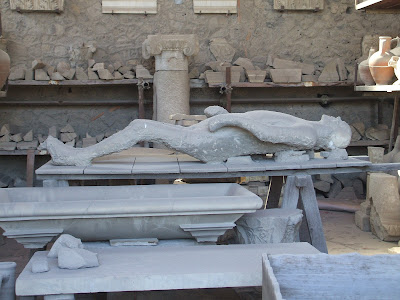 Following the volcanic eruption, first pumice and then ash fell on the city.   Then it rained, turning the ash into a mud which encased the suffocated bodies of the victims.  Although their flesh decayed, the skeletons of these victims remained trapped in the preserving layer of volcanic debris.  The director of the excavation of Pompei discovered a method for keeping the ash cases intact—pouring plaster into the hollow to create a cast of the body at the moment of death.   Pretty ingenious, but kinda creepy, too.

This place is huge, and there’s not much that’s colorful here.  These green trees looked refreshing against the monotonous greys and browns of all the stonework. 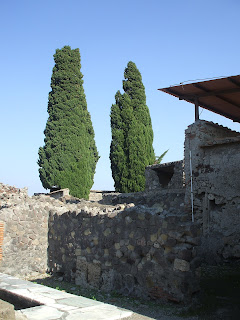 And, of course, Grace and I added a little color to the place! 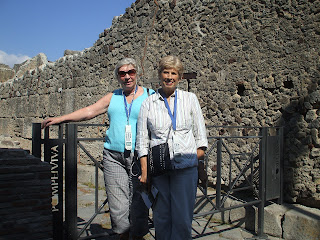 We were tapped out after about 4 hours of exploring this place.  Walking on the uneven stones of the streets of Pompei  is hard on the joints.  Mine felt like someone had poured plaster in them!

On the way back to Marina Grande, we stopped at an al fresco restaurant in the main piazza to enjoy a glass of wine (served with olives and peanuts) and people watch.  Grace recognized a couple of women with whom she had shared a taxi to Sorrento, Blanche and Donna, and they joined us for a sip and a chat.  You’ll hear more about them in a subsequent blog.

I love all of the ancient history in Italy!I am just absolutely fascinated by Rome Italy tours. I cannot WAIT to go there one day!