On Monday, Riccardo and I hopped on a train and went to tour Nice, population 350,000.  The French Riviera has a totally different feel to it than the Italian Riviera.  Both attract the rich, but in France, the people AND the surroundings look rich and contemporary, where in Italy, the medieval towns have preserved more of their history. 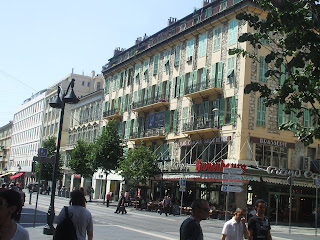 The buildings in Nice seem to date back to about the 19th century.  They are elegant and beautiful.  The wealthy British began to vacation in the area beginning in the mid-1800's. 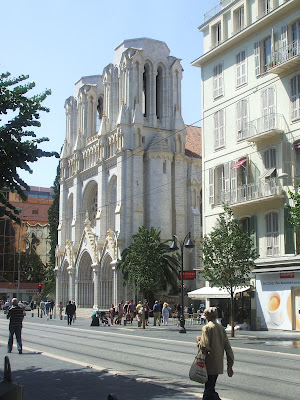 This is a modern church we passed on the way to the old part of Nice.  We went inside, and I must say the stained glass windows were beautiful, but the rest of the church couldn’t compare to Italy’s ornate cathedrals. 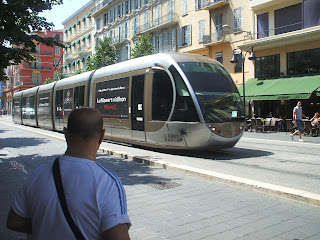 There is an electric tram system that operates in Nice, and it’s a little unnerving to have these trains whisk by as you walk the streets. 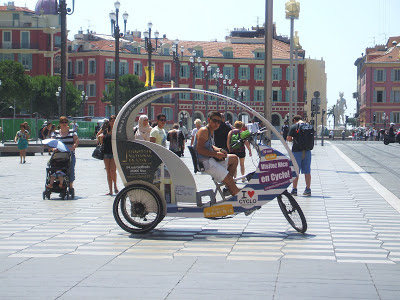 Even these little bicycle taxis have a modern, contemporary look to them. 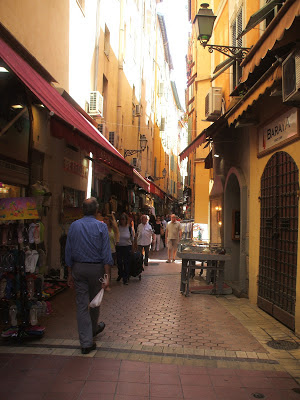 We walked around the old town through these colorful alleyways. 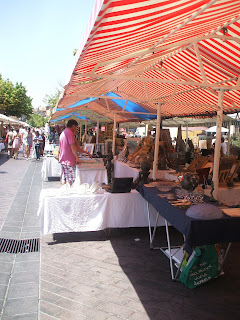 There was an antique market in one of the piazzas. 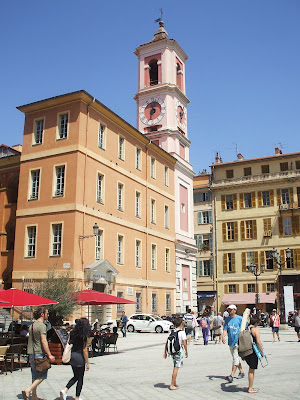 And slightly more age in the buildings surrounding the piazza. 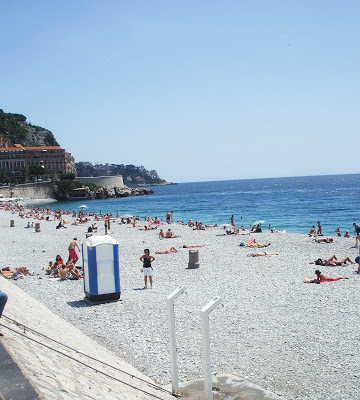 We eventually met the sea again, as you always do along this spectacular coast.  In high season, beginning in July, this beach will be very crowded. 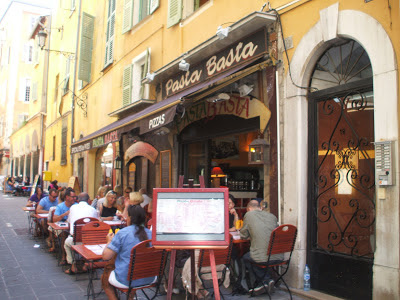 We wandered the old town looking for this restaurant, Pasta Basta, which was recommended by Riccardo’s daughter Chiara.  We both had delicious Nicoise salads and chatted with a couple from Verona at the next table.  The husband of the pair told me he was waiting for the U.S. to rescue Italy from its economic crisis.  I wasn't encouraging.

After lunch, we went looking for the train that offered a tour of the city, including the upper hills, but we couldn’t find it, so we decided to take a tour bus.  Big mistake.   There was an audio program that you listened to with earphones in whatever language you preferred, but the driver and the audio program seemed to be out of sync.  So the narrator would often be describing something that wasn’t yet visible to us or that we had already passed.  At times, there was reference to something on the left, when it was actually on the right.  For 18 euros, I expected more.

It was a very hot day, but we sat in the open seats at the top of the bus so I could try to take some photos.  It was difficult because the bus went pretty fast, but I got a few. 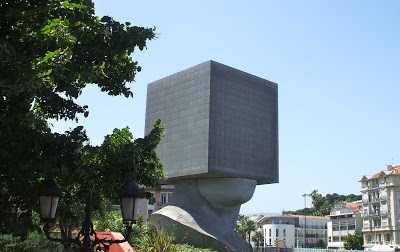 At first, I thought this was a contemporary sculpture (which I would have named "Blockhead"), and it may be that also, but it’s an office building!  Some pretty creative architectural design, I'd say. 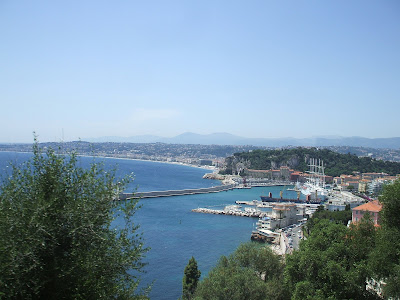 From the hilltop, I was able to get a pretty good shot of the port area. 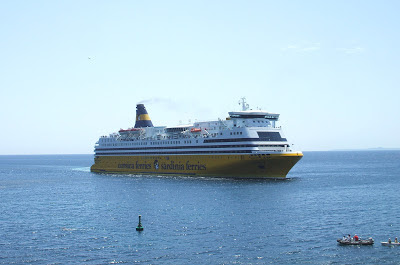 You can see how big this ferry is compared to the small boat in the lower right. 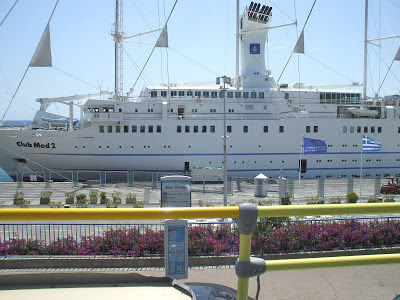 A Club Med cruise boat was in port, along with several other cruise ships.  Nice is a popular cruise destination. 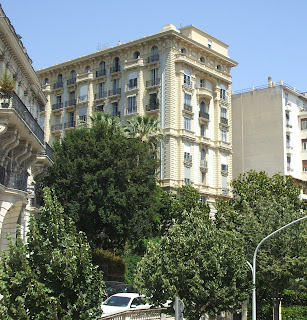 We drove through some very posh residential neighborhoods.   A number of wealthy Russian families settled here after royalty was ousted from that country and there’s still a large contingent in the area.  There were some beautiful villas here. 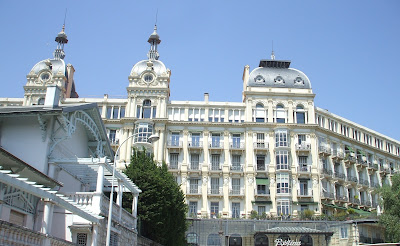 I think this is some kind of palace-- there was mention of Queen Elizabeth staying here. 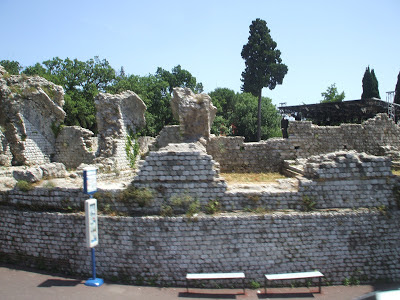 These were the only ruins we saw.  Apparently the French aren’t as reverent about preserving history as are the Italians.

After this disappointing tour, we soothed ourselves with gelato.

Nice is an elegant city, and I would come here if I wanted to shop, because there are hundreds of stores of all variety.

Riccardo and Marina invited some guests for dinner on this evening—Angelica, a friend Riccardo made in his English class, and her mother, Bea.  Marina made an exquisite leek and potato quiche and a lovely pureed vegetable soup, followed by an assortment of gelato.  The company was marvelous.  Both Angelica and her mother are delightful people.  Bea is a lively 94 and has been an artist for 80 years.  She’s well known in Italy and has also had some international recognition.  We looked at some of her paintings on a website.  Here are two of my favorites.

The English translation of the title of this one is “Loneliness”, but it’s really "Solitude" that Bea was expressing.  I told her I was surprised that there wasn’t a person in the boat, because solitude, to me, include one person.  She said this represented what her vision of solitude was, i.e., the setting she imagined being in.

Bea did an umbrella series of paintings, and this was my favorite in that group.  The naked man, I think, represents the mischievous nature I noted in Bea.  She seems to be a woman who has enjoyed life very much and her spirit is very strong.  At 94, she’s still interested in learning—her current interest is to learn Russian.

Bea does all her paintings in watercolor, and I really like her style.  It evokes emotion in me.  If you’d like to see some of her other paintings, below is a website address where you can see more.  She’s done many of the sea, which I also love very much.